ANGE POSTECOGLOU name-checked Joe Hart after the 1-1 draw with Giovanni van Bronckhorst’s Ibrox side at Parkhead this afternoon.

The Hoops knew a win would virtually wrap up the title and they looked to be heading in the right direction when Filipe Jota gave them a 21st-minute advantage when he collected his 12th strike of an impressive campaign during his loan period from Benfica.

Daizen Maeda blew two glorious opportunities to put the contest out of sight which allowed the visitors to regroup in the second period to take the game to the hosts. 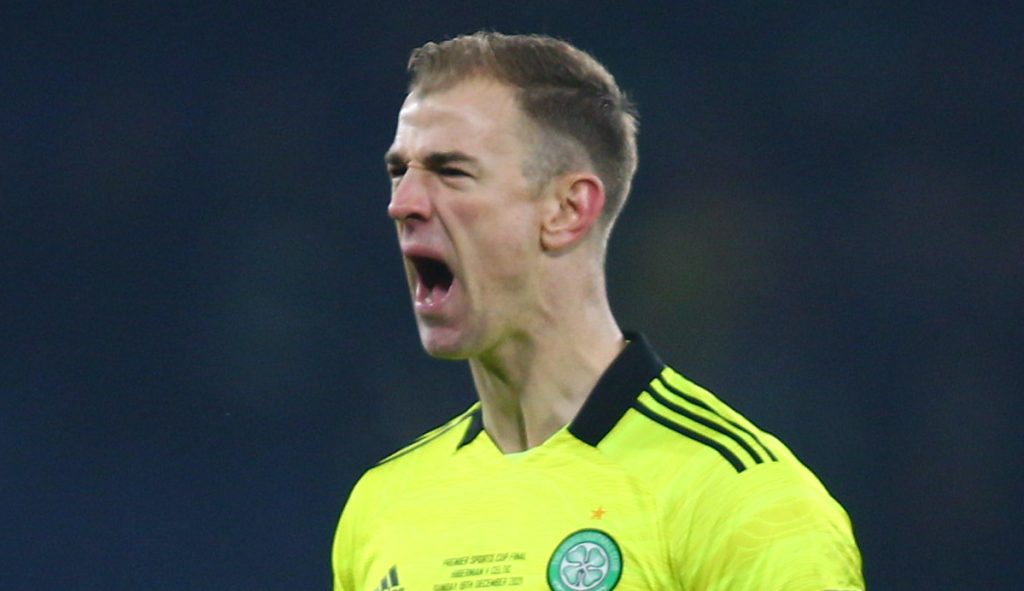 ROARING SUCCESS…Joe Hart was a key man in the 1-1 derby stalemate.

Some atrocious slack play all over the pitch allowed the visitors to put together a passage of play that ended with Ryan Kent nudging a pass in front of Fashion Sakala who left Hart stranded with a whiplash finish low to the keeper’s right-hand post.

The 35-year-old 75 times-capped England international netminder was then tasked with making a couple of vital saves to make certain the team did not capitulate as they did at Hampden in the Scottish Cup semi-final last month.

The Parkhead outfit remain six points clear with three games to play – starting with Hearts in the east end of Glasgow on Saturday – and only a collapse of historic porportions will prevent them from claiming their tenth championship in 11 years.

Postecoglou, speaking to Sky Sports, said: “It was a cracking game. Pretty tight and pretty tense.

“Both teams had chances to get more goals, but, ultimately, it was a good contest between two good teams.

“I’m pleased we got a draw out of it.

“We had the chances and we don’t take the chances to get the second and third and they stayed in it.

“In the end, they’ve got nothing to lose so they’re going to throw men forward and put us under pressure which we expected if we were ahead.

“We dealt with it okay, but it became difficult at times. Joe Hart hasn’t made many saves this year, but he was outstanding today.

“That’s why we brought him to this football club.”

Hart has solved the club’s No.1 problem since his £1million arrival from Spurs in August after last season where £4.5million misfit Vasilis Barkas, Scott Bain and Conor Hazard shared the goalkeeping duties without anyone convincing.

However, Postecoglou refused to get ahead of himself when he was asked if winning the Premiership would be the greatest achievement of his career.

The 56-year-old Greek-Australian gaffer added: “It’s not the time for reflection. That time will come at the appropriate moment.

“Right now it’s about supporting the players, they’ve been unbelievable this year in every challenge we’ve had.”