Celtic Quick News on News Now
You are at:Home»Latest News»‘BETTER AND BETTER’: BROONY’S VERDICT
By CQN Magazine on 28th May 2020 Latest News

SCOTT BROWN insists Celtic would have won the title by more than 13 points if the season had been played to a conclusion.

The Hoops skipper reckons the nine-in-a-row champions would have romped to the championship and left all challengers in their slipstream.

Neil Lennon’s men only had eight games to play and a superior goal difference of plus 25 when football went into lockdown in mid-March due to the coronavirus pandemic.

The SPFL hierarchy awarded the Parkhead side their 51st flag in their history when they made the historic decision to call a premature halt to the campaign last week.

It left Scotland’s title kings frustrated they would not be allowed to finish the job on the pitch following their excellent form since the turn of the year when they proved to be unbeatable.

They racked up 28 from a possible 30 points – their only stumble coming in a 2-2 draw at Livingston – while they powered through to the Scottish Cup semi-final where they were due to meet Aberdeen at Hampden on Easter Sunday. They had already knocked out Partick Thistle (2-1), Clyde (3-0) and St Johnstone (1-0) – all away from home – on their way to the last four. 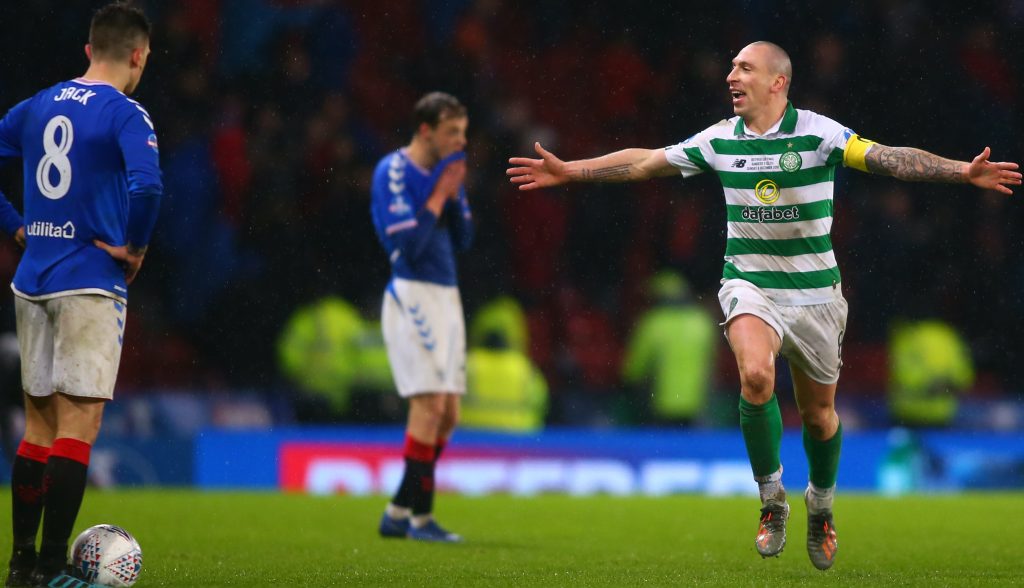 CATCH US IF YOU CAN…Scott Brown celebrates the Betfred League Cup triumph over Steven Gerrard’s stricken Ibrox side at Hampden in December.

The champions’ trip to Ibrox on Sunday, March 15 was cancelled when the game went into cold storage a couple of days beforehand. The Hoops believe they were denied the opportunity to put more distance between themselves and Steven Gerrard’s struggling outfit who had dropped 13 points in 2020 after losses against Hearts, Kilmarnock and Hamilton Accies and draws with Aberdeen and St Johnstone.

Brown, speaking to the club website, said: “We were actually getting better and better as the season went on and we wanted to extend our lead at the top.

“It was hard that the Friday before the Glasgow derby that the game was cancelled, because we were in a great position. If we’d have won that, we’d have gone 16 points clear and we believe we’d have done that.

“We had Aberdeen in the semi-final, we were in great form, and it’s just a shame that we couldn’t have managed to squeeze that in, as well. It is what it is, to be honest. We’ve had a great season, the fans have been phenomenal, they’ve backed us all the way, and this one is also for them.”

Brown added: “Everyone knows we had a little blip at the end of December, but we went to Dubai, we came back and we won every single game apart from an away trip to Livingston which we drew.

“That shows you the lads’ consistency and determination over the whole season that when we do get that defeat, you bounce back and you bounce back stronger – and that’s what we’ve done.”