Celtic Quick News on News Now
You are at:Home»Latest News»BORUC POISED FOR NEW DEAL
By CQN Magazine on 4th May 2016 Latest News
FORMER Celtic keeper Artur Boruc is poised to remain at Bournemouth for at least another year.
The 36-year-old Pole will trigger an appearance-related clause in his contract entitling him to a new 12-month deal at the Premier League outfit.
Boss Eddie Howe admitted: “I think your goalkeeper is pivotal to to the success that you have. 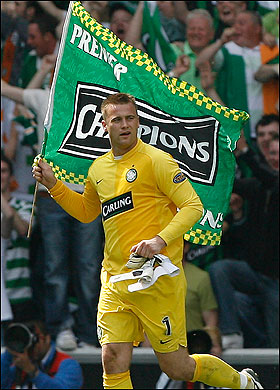 “When Artur’s on top form, I think you would struggle to find a better goalkeeper.”
Boruc, who has played 31 league games during the current campaign, joined the Dean Court side on loan in September 2014 after losing his No.1 spot at Southampton.
He had 17 shut-outs in 37 appearances and was a key man as the Cherries won the Championship. The extrovert shotstopper agreed a permanent move in May last year after being released by Saints.
Boruc has become a fans’ favourite with his consistent displays as Bournemouth have secured survival in the top flight.
Ex-Hoops gaffer Gordon Strachan paid £1million to bring the 58-times capped international from Legia Warsaw in 2005 and he won three titles and three Cups in his five years at Parkhead before moving to Fiorentina in Serie A.
He returned to the UK in September 2012 before dropping out of contention under new boss Ronald Koeman, who, ironically, paid £10million to bring in Fraser Forster from Celtic at the start of last season.
————————————
ORDER Charlie Gallagher’s brilliant new biography, written by Celtic historian David Potter, from CQNBookstore.com and you’ll receive a SIGNED copy and a FREE GIFT!