Celtic Quick News on News Now
You are at:Home»Football Matters»BRENDAN PRAISES HIS TEAM’S ‘WINNING MENTALITY’
By CQN Magazine on 4th December 2016 Football Matters
BEAMING Brendan Rodgers heaped praise on his players after their remarkable comeback triumph over Motherwell at Fir Park yesterday.
The champions were heading for their first domestic defeat of the campaign as they trailed Mark McGhee’s team 2-0 at the interval.
However, the Hoops rallied in the second-half and goals from Callum McGregor, Patrick Roberts, Stuart Armstrong and Tom Rogic earned them a fabulous never-say-die 4-3 triumph. 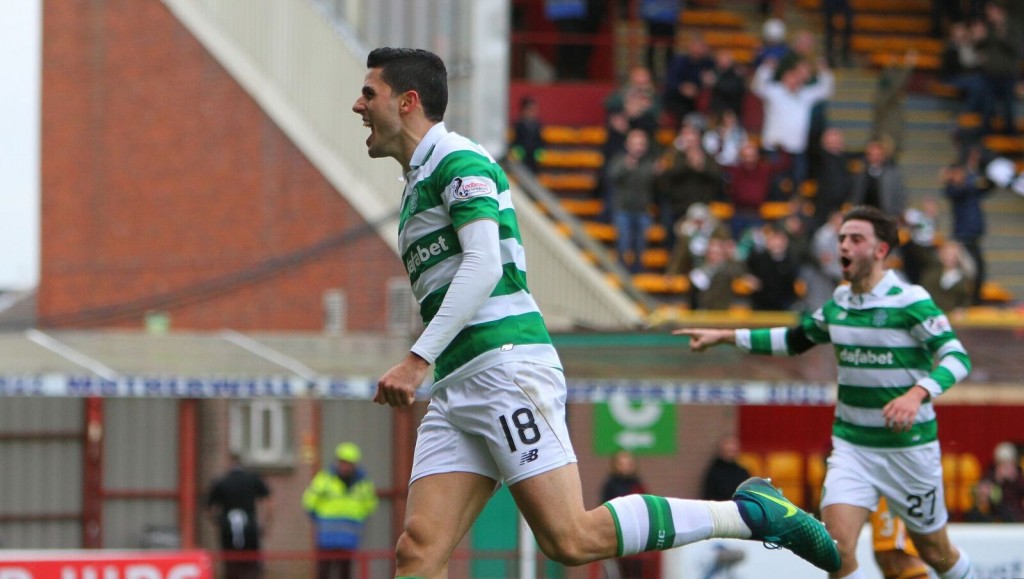 Rodgers said: “I’m absolutely delighted with the result and the second-half performance showed we are a winning team with a winning mentality.
“In the first-half, we were disappointing defensively. The team couldn’t press like we do as the back-four were too deep, particularly my two centre-halves. We weren’t aggressive enough in the game.

“Up front, we didn’t hold it up so our game was a little bit broken and they were deserving of their lead. I thought they scored two really good goals, but it was poor defending from us.

“We needed to change the momentum of the game, so we changed the shape of the team, going to three-diamond-three to give them different problems and give us more numbers inside, keeping the width and it also allowed us to attack, but still have the stability of the back-three.

“It was a big risk at 2-0, especially with the spaces that sometimes it can leave, but the players were exceptional in how they accepted the risk and the level they played at technically and how they worked the spaces tactically. The goals were sublime.”

Rodgers also hailed matchwinner Rogic, who has now scored 10 goals in this campaign, including the opener in the League Cup triumph over Aberdeen seven days ago. The Aussie has now reached last season’s total!

The Hoops gaffer said: “He’s an amazing player, with a real high level of technique and he’s improving his stamina all the time.

“He’s playing in different positions for us, but what he can get goals and he’s scoring important goals. His contribution was outstanding.
”There were a number of very good performers in the second-half. The boys down the sides really opened up the pitch for us, Stuart Armstrong was exceptional, along with Callum McGregor. Scott Brown provided that protection and Tom in that no.10 role was exceptional.

“Moussa Dembele was quiet and he wasn’t as good as he has been, but he’s still handful because of his presence.

“It wasn’t one of Kolo Toure’s better days, but he came back and kept fighting and working, and it was much better from him in the second-half.”
Christmas shopping ideas – the best Celtic books and DVDs available now at www.cqnbookstore.com – tell the missus!