Celtic Quick News on News Now
You are at:Home»Latest News»BROONY HAS NO REGRETS OVER RED
By CQN Magazine on 21st February 2019 Latest News

SCOTT BROWN insists he was satisfied with his goal celebration against Kilmarnock at Rugby Park on Sunday – even if it did mean him seeing red.

The Celtic skipper couldn’t stop himself sharing the joy with the travelling support following his 90th-minute winner to put the champions eight points clear at the top of the Premiership.

Brown was criticised in some quarters for his exuberant revelry, but such comments will not weigh heavily on the 33-year-old former Scotland international.

And the captain also revealed team-mate Jonny Hayes tried to help him escape the attention of referee Bobby Madden who had booked the midfielder in the first-half for a robust challenge on Killie defender Greg Taylor.

The Hoops powerhouse, preparing for tonight’s make-or-break Europa League last-32 encounter against Valencia in the Mestalla, said: “Jonny tried to save me. He tried to put me underneath his wing, kidding on I wasn’t there and saying: ‘I think we’ve got away with this, pal’. 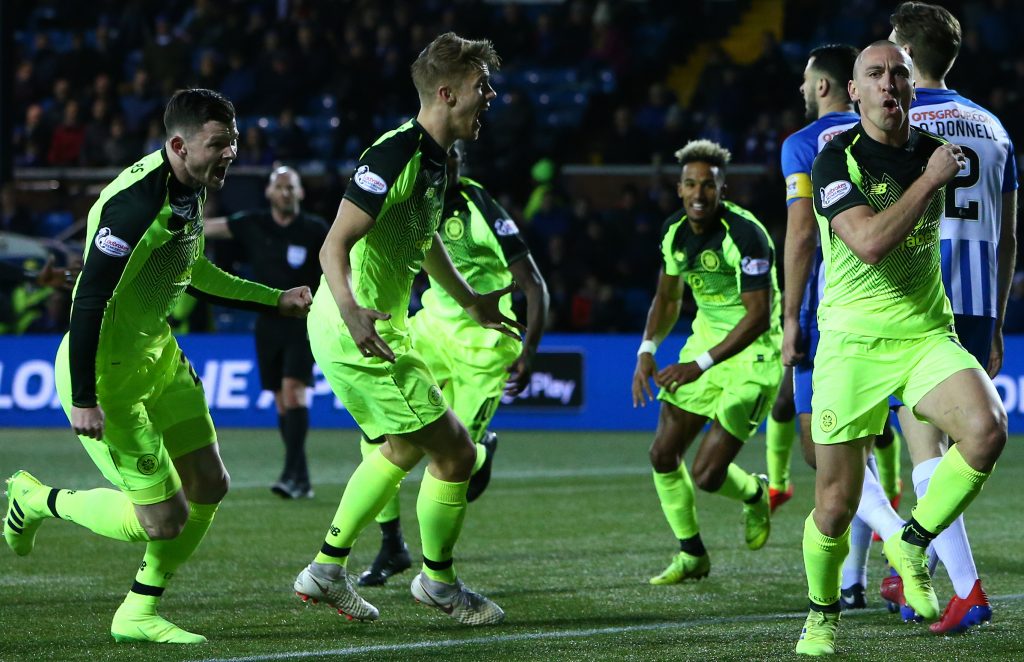 GREEN FOR GO BEFORE THE RED…Scott Brown celebrates his winner at Kilmarnock – before his sending-off.

“I’ve turned around and Bobby is standing right there. I said: ‘Jonny, turn around’. He said: ‘Yeah, okay, you’re in trouble’.

“To be honest, it’s probably people criticising who have never kicked a ball in their lives who are sitting in the house being keyboard warriors, but I’m doing a job I love and it’s a celebration at the end of the day.

“Bobby did what the rule says if you go off a tiny bit, but everyone has to be in the same boat, although I know it is hard for referees to be consistent like that.

“There are a few guys got away with it, but I understand the rule, especially if there are kids at the front of the stand and there are people there getting squashed.

“You don’t want to see people sprinting onto the park or anything, but I didn’t exactly sprint off.

“It had been a long time since I’d scored and then I got two in a week, so it was emotional.

“I tried to stop myself before I went over the boards, but, as soon as you score, the lads go towards you and I was either going to collapse into the board or jump over it.

“I jumped over a hoarding, but as soon as I did it, the fans ran to me. I saw Bobby with his cards out. I just walked off. 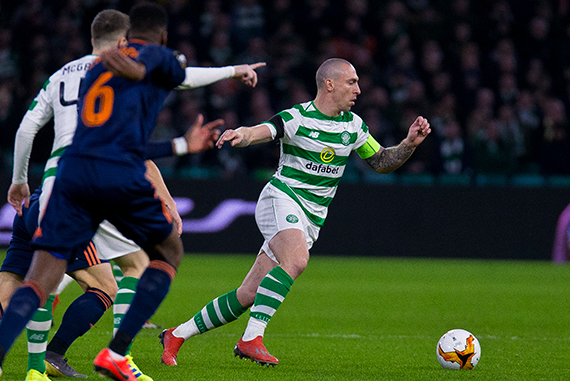 ON THE MOVE…Scott Brown tries to spark a Hoops revival against Valencia.

Brown refused to write off Celtic’s hopes of a miracle this evening, despite the poor showing in the 2-0 loss in the first leg at Parkhead last week.

He added: “It is a great opportunity for everyone, even though it is going to be hard with us being two goal down.

“We need the first goal to try to put them under pressure and see if we can play.

“We’ll need to be more patient with the ball. We gave it away too much last week, so we need to be more controlled in possession and press them a bit better than we did, as well.

“We usually turn these scorelines over when the second leg is at home, but this is different.

“The pitch is a bowling green, the stadium looks good and the fans will be with us, so we need to make sure we go out and give a good performance.

“Last week, we started really well for the first 20 or 25 minutes, so I think we have to try and build on that

“We need to try and keep a clean sheet, score the first goal and take it from there.”

Unfortunately, history is against Brendan Rodgers’ men. The Hoops have never won a European tie on Spanish soil and Valencia have already knocked out the Scots in two previous meetings.