SLICK Celtic kept their foot on the throttle as goals from Ryan Christie and Oliver Burke left Hibs in their slipstream at Parkhead tonight.

And the champions maintained on course for their eighth successive Premiership title with their 13th straight home league win – and once again Scott Bain kept a clean sheet for the sixth time this year.

The game burst to life in the fourth minute when Callum McGregor tip-toed his way forward before playing a swift ball to Burke.

He took the return and fired the ball goalwards, but, unfortunately, his 18-yard drive hit the heel of his Hibs namesake Darren and was directed to safety.

It was a lightning thrust, though, that once again highlighted the speed within the ranks of Brendan Rodgers’ outfit.

A few moments later, Christie set up Scott Sinclair who pulled inside onto his right foot, but his angled shot took a touch off David Gray and flew wide for a corner-kick. 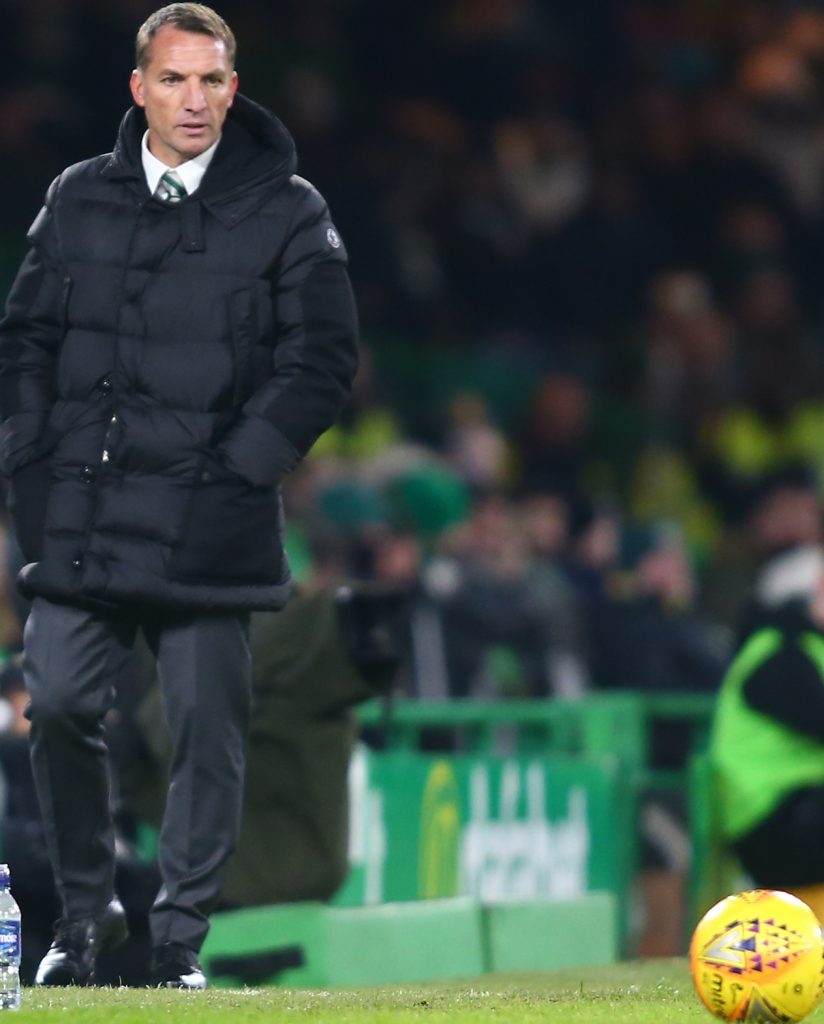 EYES ON THE BALL…Brendan Rodgers maintains his concentration.

In 15 minutes, Christie robbed Oli Shaw of the ball 30 yards out and drove forward before flashing a left-footer just wide with keeper Ofir Marciano scrambling to his left.

Minutes later, McGregor, looking keen and alert, raced forward again before sliding a neat ball to Timothy Weah who had made a brilliant run across the box. The on-loan American teenager tried a quick flick with the outside of the right foot, but, alas, the keeper managed to block the effort and the chance was lost.

Sinclair was next up to have a go at goal with a neat touch inside onto his favoured right, but his elevation was just off and the ball carried wide of the upright with Marciano again looking worried.

The breakthrough goal arrived in the 24th minute and it was a wonderful three-man move that shredded the Edinburgh side’s defence.

Jeremy Toljan, looking extremely comfortable in his first since start last April, collected the ball wide on the right and played a smart one-two with the ever-alert and inventive Weah who touched the ball into the right-back’s stride.

The German was patient before measuring a pass to Christie who wasted no time in arrowing a low angled right-foot drive wide of the helpless Marciano. 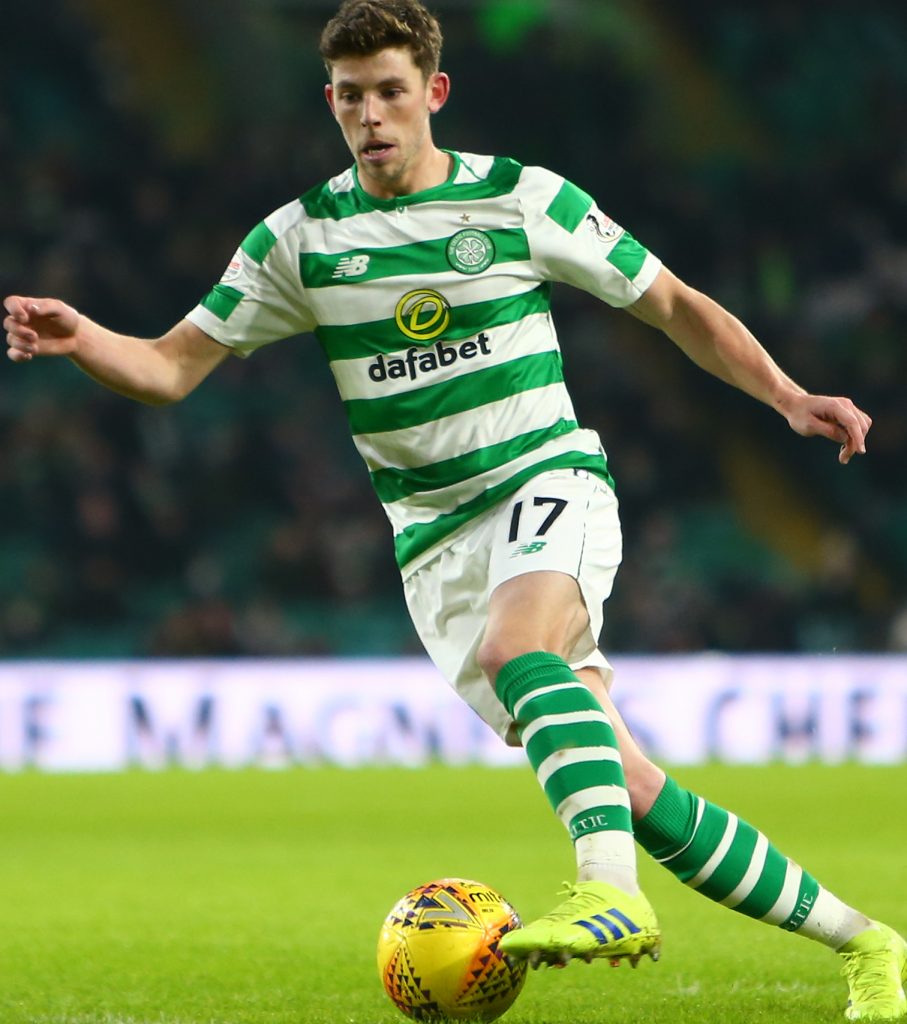 It was a goal the Hoops certainly deserved on the strength of their possession and their flowing football that was a joy to behold as the ball was moved around slickly and accurately.

On the half-hour mark, Weah, opening up all sort of possibilities with his clever movement, zipped in a low drive from the edge of the box and Marciano sprawled full-length to his right to fist the ball to safety.

In the 37th minute, Mark Milligan became the first booking of the evening when he recklessly charged into a challenge from behind on Christie. It wasn’t a big decision for referee Craig Thomson to fish out the yellow card and flash it towards the Australian defender.

Three minutes later, Sinclair danced his way into a dangerous position on the bye-line and tried to pick out Burke in front of goal, but it was hastily booted clear by a frantic defender.

Then it was McGregor’s turn to add his weight to the attack with another penetrating run from the middle of the park, but he tugged his final effort wide of the left-hand post.

Half-time arrived with the champions sweeping the ball around with ease and pace with the only concern their advantage had stalled at one. 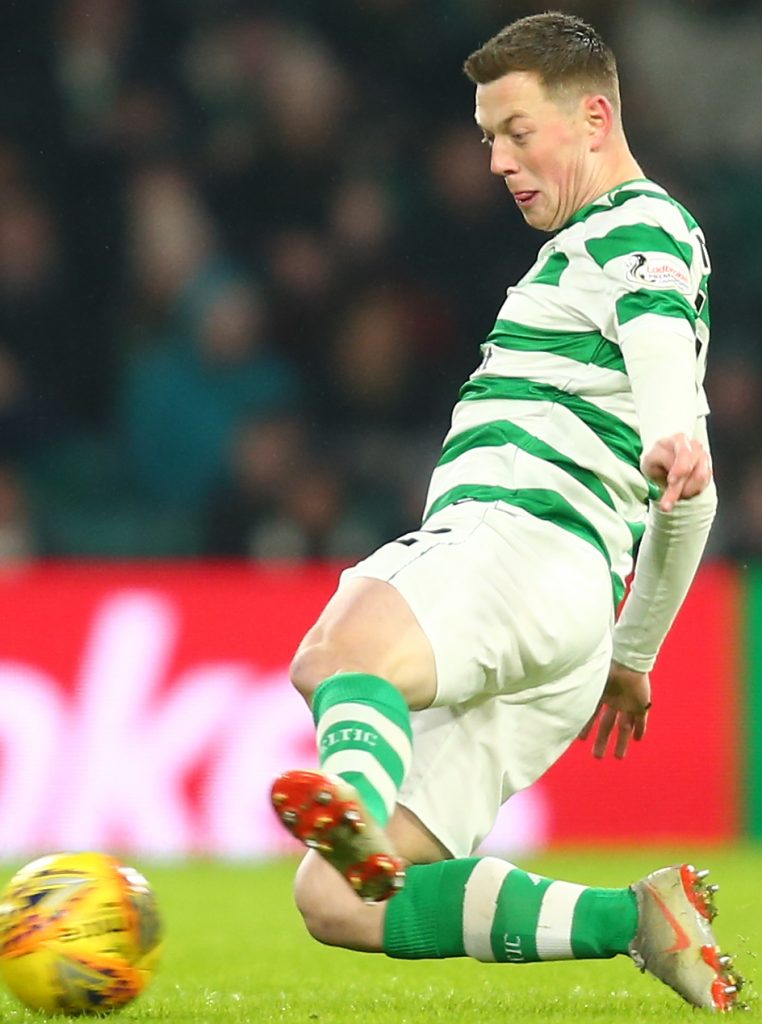 MIDFIELD MASTER…Callum McGregor displays his true grit with this challenge.

There was a booking for Scott Brown shortly after the turnaround when he collided with Milligan and there were no complaints when ref Thomson produced the yellow card.

Moments later, Toljan and Weah combined on the right before the tricky attacker sent in a wicked cross which was knocked past Marciano’s left-hand post by Sinclair.

Toljan and Weah combined again as the Hoops continued the surge towards the Hibs goal, but the threat was repelled and then Burke tried an effort from a tight angle that was blocked by Marciano at his near post.

Florian Kamberi was next to go into the book following a cynical swipe at the rampaging Weah. The teenager made light of the underhand challenge.

Christie curled over the resultant free-kick and comeback man Dedryck Boyata got in behind the visitors’ rearguard to thump a header at goal from six yards, but Marciano made a remarkable reflex save to bundle the ball away from the net.

In the 63rd minute, Celtic, at last, got the second goal they so richly deserved. Once again, the quickness of the movement prised open the Easter Road side’s defence.

Burke made a good run across the box to accept a neat pass from Christie and the Scotland international turned sharply to wallop a shot goalwards. The ball took a nick off the desperately-lunging McGregor and spiralled away from the helpless Marciano.

But there was no doubt about it – it was Burke’s goal, his third for the Hoops since his loan arrival last month. 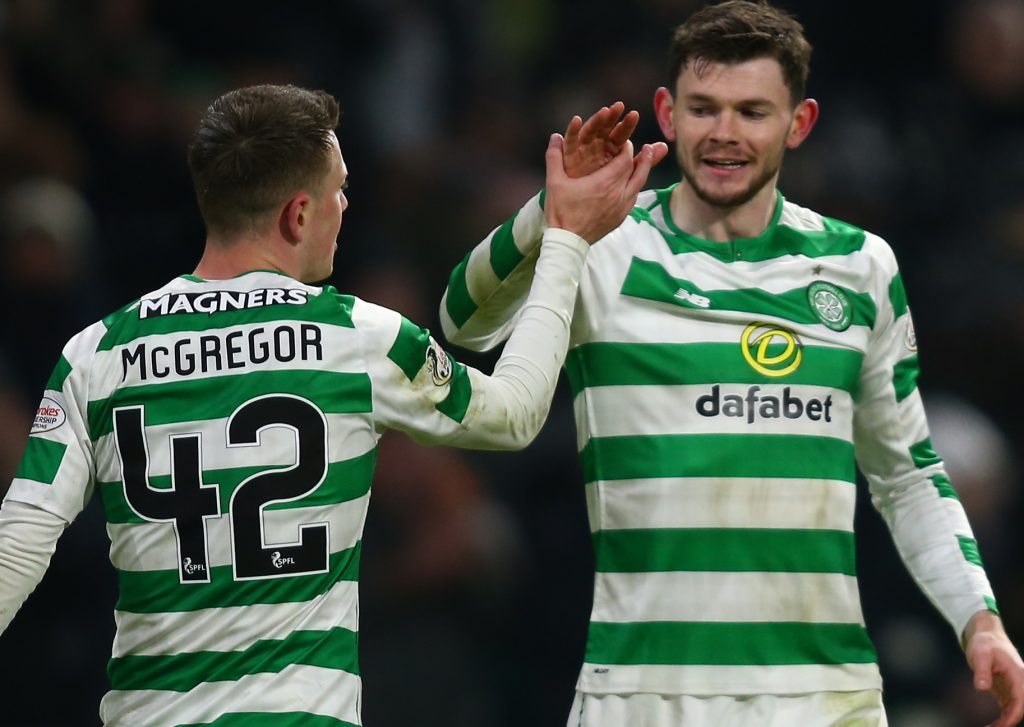 Sinclair was given a round of applause when he was replaced in the 73rd minute by Mikey Johnston as Rodgers freshened up the team and Nir Bitton followed 60 seconds later when he came on for a tiring Boyata.

A couple of minutes later, McGregor, gliding around with effortless ease and a sublime touch, set up Johnston on the edge of the box, but his low shot was wide.

Darnell Johnston was booked for a dreadful tackle on Emilio Izaguirre that ended the game for the Honduran. In truth, it was a shocking challenge and match official Thomson would have been well within his rights to bring out a red card. The Hibs defender was most fortunate to escape.

It was a shame for both Izaguirre and £2million Ivorian striker Vakoun Issouf Bayo who was poised to make his debut. Boss Rodgers had to have a quick change of mind as the left-back was stretchered off and Jonny Hayes came on in his place.

The focus of attention now switches to the Scottish Cup on Sunday when St Johnstone visit the home of the holders.

The treble treble is getting closer.