HIGH-TEMPO Celtic hurtled into the new year with a scintillating performance against a bedraggled Hibs side at Parkhead this evening.

The gap at the top of the Premiership was cut to three points and there was a bonus for the capacity crowd with the appearance of all three Japanese new Bhoys, Daizen Maeda, Reo Hatate and Yosuke Ideguchi.

The all-action frontman marked the occasion with his first Hoops goal and Josip Juranovic made it two in the 25th minute via the penalty spot.

It was an evening of celebration for the Hoops support who also got the opportunity to welcome back Filipe Jota late in the contest. 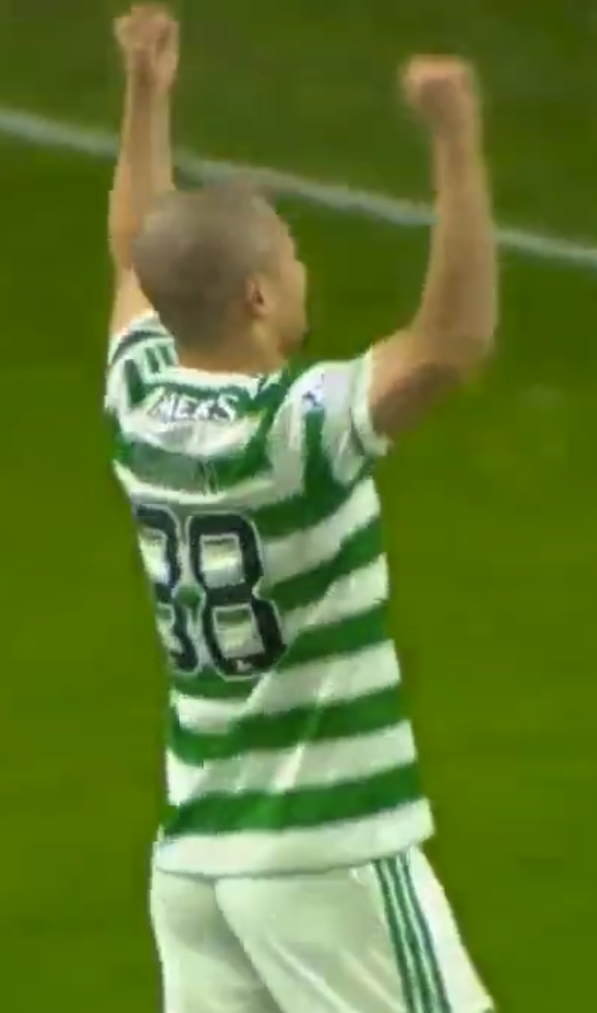 Inside four minutes Maeda opened the scoring in an astonishing break from the Hoops after they had survived a near thing at their own end only 45 seconds beforehand.

Kevin Nisbet struck the inside of the left-hand post after a Chris Cadden ball from the right had eluded Joe Hart and Cameron Carter-Vickers. It looked as though the Easter Road forward couldn’t miss from practically under the crossbar, but he completely fluffed the opportunity and the home defence breathed a sigh of relief.

Ange Postecoglou’s men had the perfect response when Liel Abada intercepted a pass on the right, played it back to Juranovic who slipped the ball in front of the rampaging Tom Rogic.

The Aussie didn’t waste any time as he knocked the ball in front of Maeda and he first-timed a low drive from 12 yards away from the stranded Matt Macey. 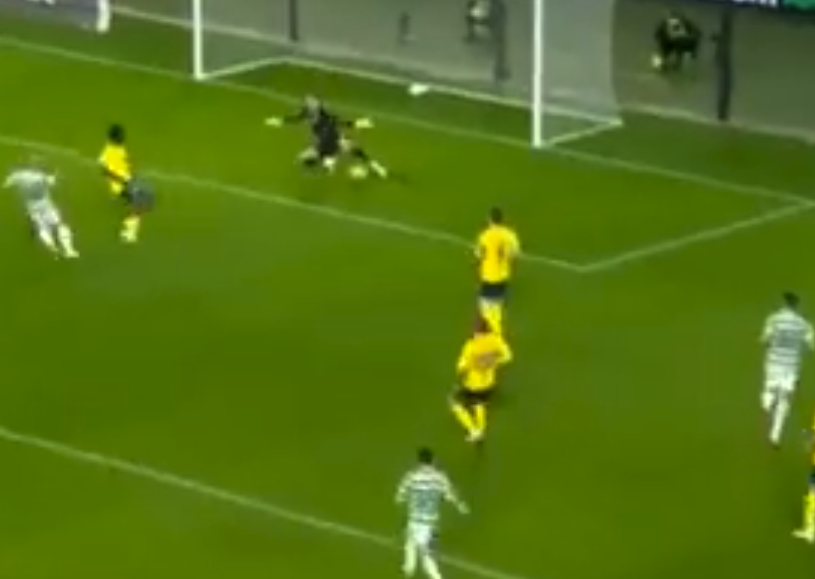 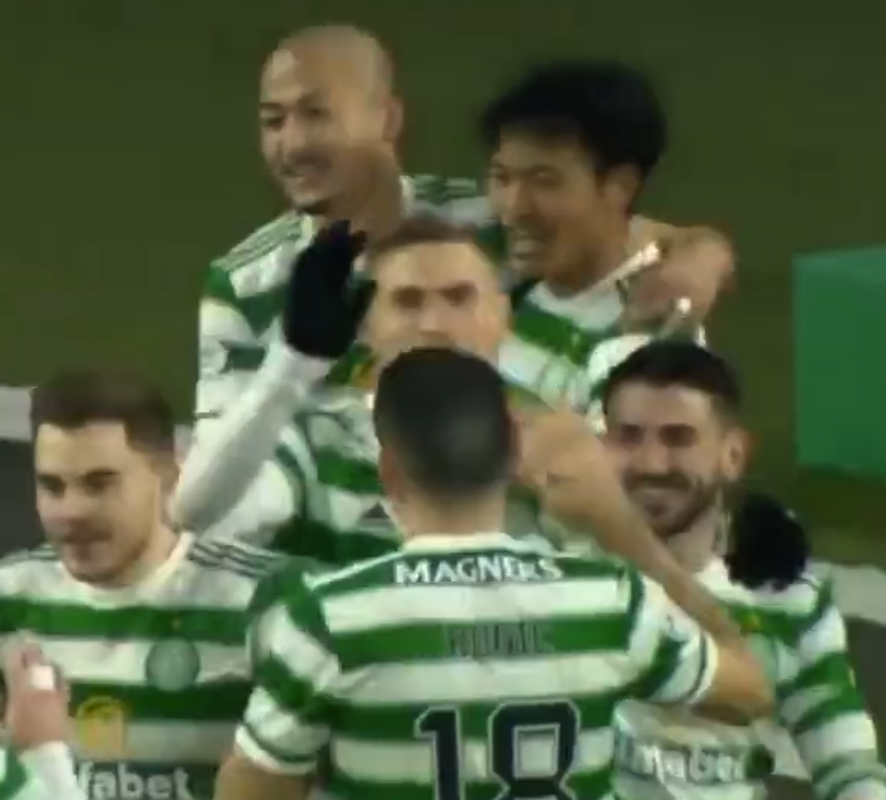 JOY BHOYS…Daizen Maeda is congratulated by Reo Hatate and his new Hoops team-mates after his breakthrough strike against Hibs.

A packed Celtic Park rose in unison as the new hitman celebrated with his delighted team-mates.

Celtic kept the pressure on and Rogic had the opportunity to double the advantage in the 18th minute when Josh Doig headed a Greg Taylor cross from the left straight to him. His first-time effort hurtled about three yards wide of Macey’s right-hand post.

It was relentless from Postecoglou’s men and Maeda’s countryman Hatate looked extremely comfortable as he moved around all over the park, spraying the ball around with accuracy and ease. 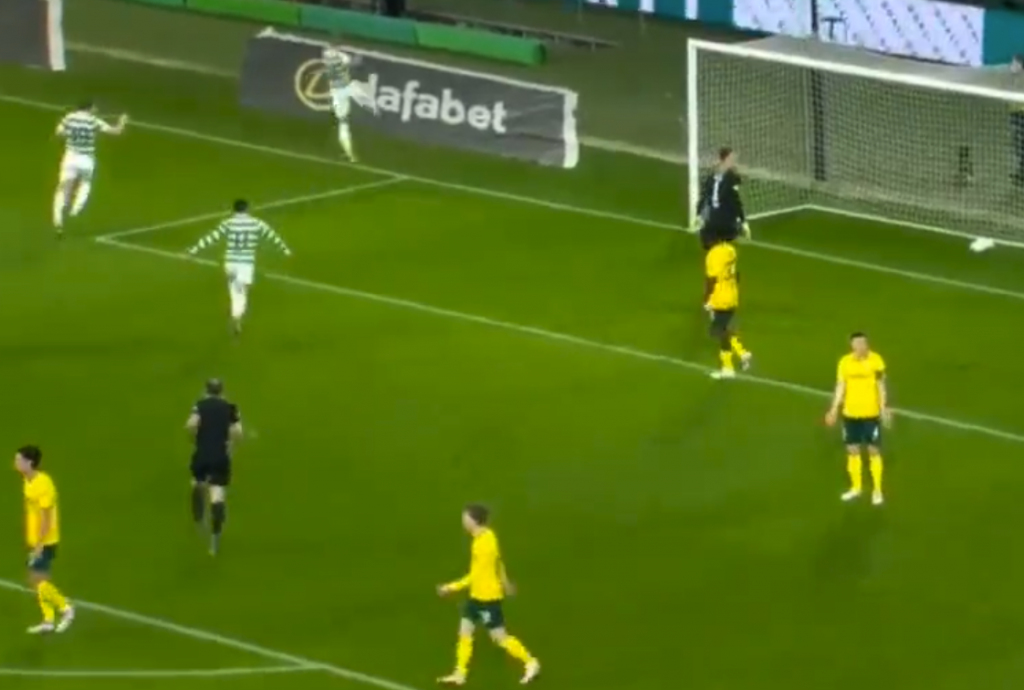 JUMPING FOR JOY…Daizen Maeda takes off as he salutes the Celtic fans after netting his debut goal.

James Forrest and Abada were lively, too, as they darted into areas to create consternation within the Hibs defensive ranks.

in the 25th minute, referee Willie Collum had no option but to award Celtic a penalty-kick when Doig handled a lob from Abada after some superb play between Callum McGregor and Greg Taylor.

Juranovic, with a 100 per cent record from the spot from his previous three spot-kicks, kept the sequence going with an impeccable drive deep into the keeper’s left-hand corner as Macey took off in the opposite direction.

In the 36th minute, Maeda set up Hatate 25 yards out and the impressive midfielder took a touch before firing in a blistering right-foot drive which was pushed away at full length by Macey. 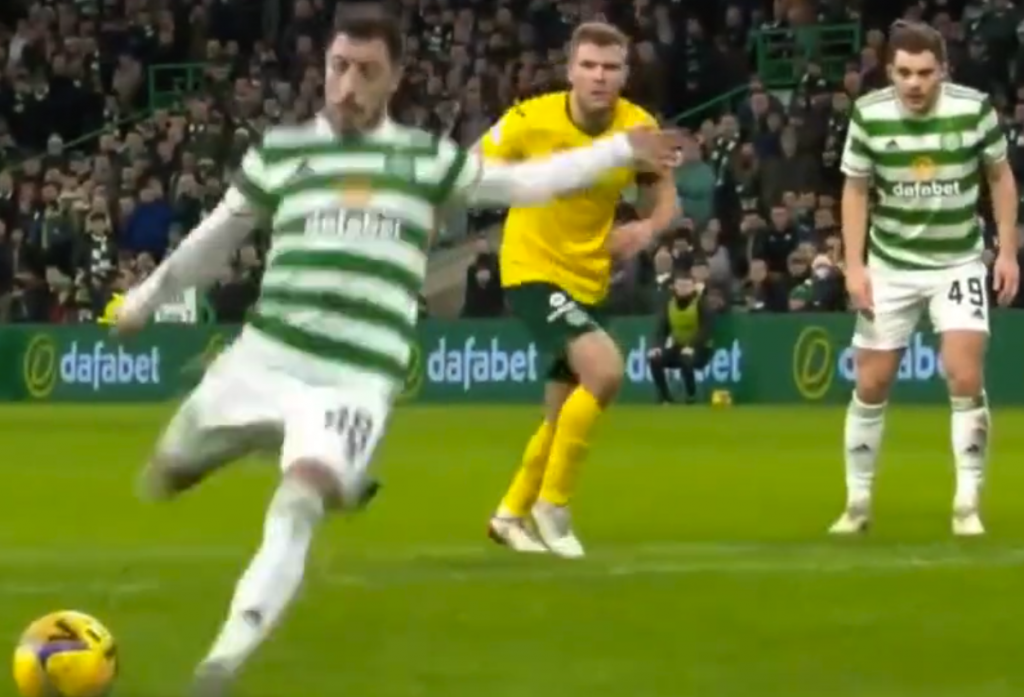 SPOT ON – NO MATTER WHICH WAY YOU LOOK AT IT…Josip Juranovic (top) prepares to strike his penalty-kick as James Forrest and Hibs’ Chris Cadden get a good view. The Croatian defender (below) races away after sending Matt Macey the wrong way.

Three minutes later, Abada and Hatate combined to provide an opportunity for Forrest, but the winger’s shot was deflected to safety.

At the other end, Carl Starfelt made a couple of good interceptions and Carter-Vickers was alert. Keeper Hart was a virtual spectator.

Hibs were being shredded and only wayward finishes from Rogic and Abada – both wildly over the bar – let them off the hook as the visitors were pushed back time and again.

The largely one-sided first 45 minutes ended with that man Hatate finding Abada with a ball inside to the winger on the edge of the box, but the little Israeli screwed the ball wide.

Within two minutes of the restart, it was Abada again threatening the Hibs goal with a strong run from the right and a low flashing drive which was held by Macey. Moments later, Hatate slashed one wide after being set up by Taylor.

In the 56th minute, Abada collided with a post after Starfelt had headed on a left-wing corner-kick from Juranovic. Thankfully, the lively raider responded to treatment and was able to continue.

Maeda was creating problems with his searing pace and he was held back by Jake Doyle-Hayes who earned himself a booking from the match official. 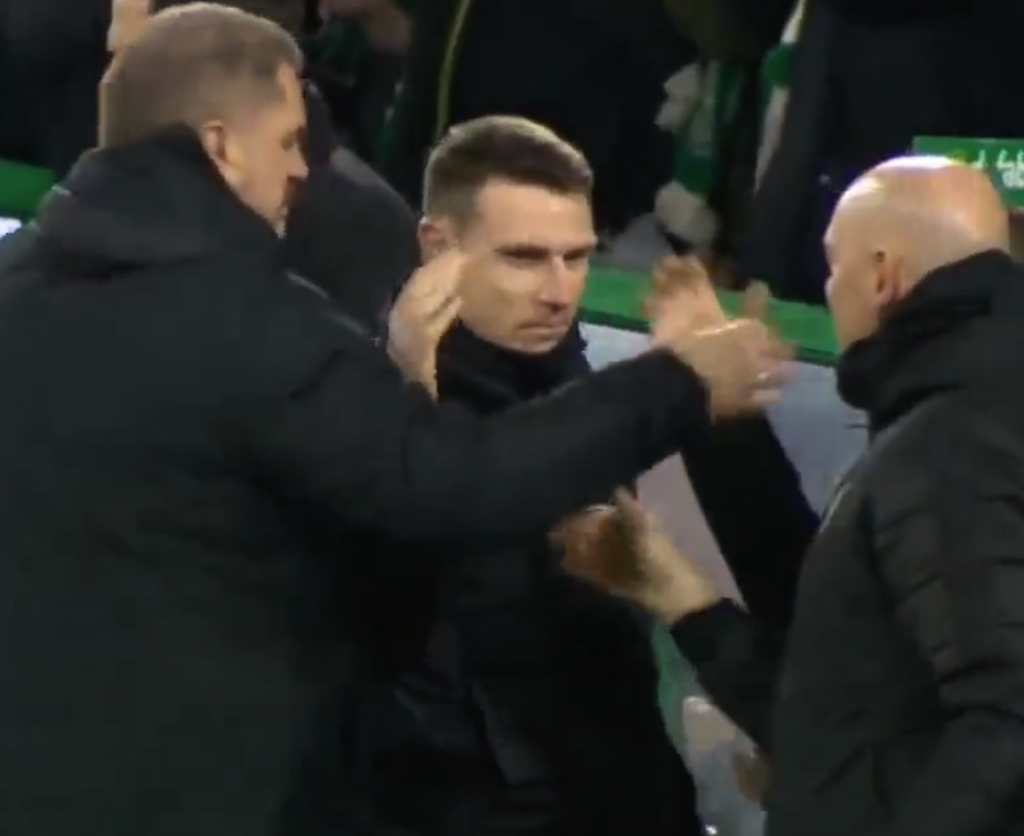 Only moments later, Hart was brought into action as he got done swiftly to hold a dangerous ball from Cadden and then it was Rogic’s turn to get a yellow card following a block on Joe Newell after a move had broken down on the edge of the box.

In the 65th minute Carter-Vickers diverted a header across goal by Starfelt past Macey, but the effort was immediately ruled out for a push by the Sweish defender. There were no complaints from the Hoops.

Postecoglou made three changes in the 74th minute to introduce Yosuke Ideguchi along with Giorgos Giakoumakis and Mikey Johnston as they replaced Maeda, Hatate and Abada.

Three minutes later Rocky Bushiri welcomed the Greek frontman to the action with a thumping challenge that brought an instant yellow card.

Filipe Jota was given a warm welcome from the fans when he came on in the 82nd minute from Forrest.

And the support also voted Hatate as their Man of the Match which no-one would argued with after a superb first impression. Daizen wasn’t far behind and we’ll see a lot more of Idguchi in the coming weeks.

Postecoglou will he satisfied with his team’s first game of 2022 with three points gained with a certain amount of style.

But, on this showing, you just know there is more to come from this Celtic team.