FABULOUS goals from the French double-act of Odsonne Edouard, with two, and Olivier Ntcham pushed Celtic towards the third stage of the Champions League qualifiers.

The Gallic aces showed their undoubted qualities as Brendan Rodgers’ side came back from the loss of a shock early goal to overcome their Norwegian opponents at Parkhead tonight.

Now the Hoops travel to take on Rosenborg in a week’s time with the prize a tie against Greek champions AEK Athens in the pursuit of a place in the glittering group stages.

And yet again it was an an evening of high drama in the east end of Glasgow during a thrilling European encounter.

In the sixth minute, Edouard threatened as he raced in from the left, but his shot lacked oomph and was easily scooped up by keeper Andre Hansen. 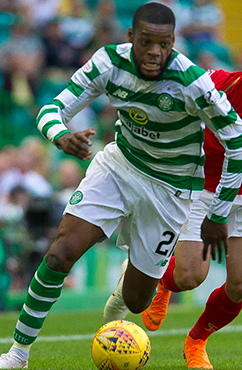 However, there was a real shock nine minutes later when the Norwegians took a sensational lead and, alas, it was a dreadful error from Jack Hendry that allowed them in to silence Parkhead.

The central defender was sloppy as he came forward and lost possession. That was all the Norwegians required to counter-attack at pace.

With the back lot exposed, the ball was worked forward to Niklas Bendtner on the edge of the box and he placed a neat pass in front of left-back Birger Meling who snapped a low drive wide of the helpless Craig Gordon’s frantically-clawing right hand.

Celtic tried immediately to get back into their stride, but they struggled to find their rhythm and looked slightly lopsided with James Forrest being asked to play a more central attacking role while abandoning his usual right-wing berth.

In the 27th minute, Edouard, menacing on the left, set up an opportunity for compatriot Ntcham 25 yards out, but his low drive flashed wide of Hansen’s right-hand post.

Moments later, the keeper dived smartly to his left to smother a crisp 18-yarder from Callum McGregor.

Just before the half-hour mark, Scott Brown was booked after a last-ditch tackle 20 yards out. The Hoops skipper then deflected the resultant free-kick wide for a corner-kick.

There were cries for a penalty-kick from the home support as Ntcham was sent flying after a crude challenge from behind, but Belgian match official Bart Vertenten, in charge of his first Champions League tie, wasn’t convinced and remarkably waved play on. 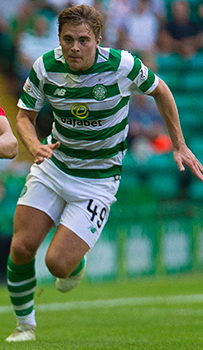 The experiment of playing Forrest through the middle clearly wasn’t bringing dividends and it was no surprise when he reverted back to his normal beat on the touchline.

Rosenberg were happy to filter back into defensive formations, but they were undone two minutes before the interval when £9million man Edouard displayed composure and class to fashion and claim the breakthrough goal.

Scott Sinclair executed impressive acceleration as he turned inside from the left to feed a pass across the face of the goal where the record recruit was lurking.

Cleverly, Edouard let the ball run on to his right foot, took a touch and rifled a low drive beyond the static Hansen from eight yards.

There was a massive sigh of relief amid the cheers to greet the effort that came at just the right time.

Inside a minute of the restart, Celtic leapt into the lead in the most spectacular way possible with a memorable piece of skill from Ntcham.

After a swift slick-passing movement, McGregor picked out the thoughtful playmaker 20 yards out on the edge of the box at the left-hand side.

The midfielder bewildered a Rosenborg defender with a delightful drag back to open up a glimpse of goal and the French ace curled an unstoppable effort high over Hansen into the top left-hand corner of his net.

Moments later, Celtic, at full throttle, almost netted a third when a lobbed attempt from McGregor was pushed onto the crossbar by the frantic keeper.

And the overworked Norwegian No.1 then produced an excellent stop to thwart Sinclair as the Hoops swarmed forward.

Brown was then hammered by an wayward challenge from substitute Alexander Soderlund, but the ref ignored calls for a red card and was content to flash a yellow at the culprit. Ntcham followed quickly after a tug on an opponent.

And the outstanding performer then drew a brilliant save from Hansen who tipped another fabulous delivery onto the woodwork and beyond for a corner-kick.

Rodgers waved his men forward as they searched for a third goal their play deserved with the visitors on the ropes and gallantly staging a rearguard action, but Edouard once again was the man who found the key to unlock the defence in the 75th minute. 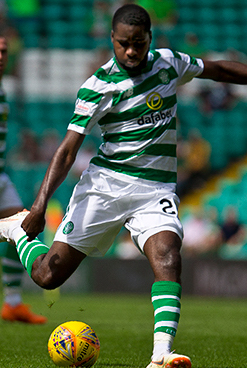 He elegantly raced onto a through pass that eliminated two defenders, waltzed into the penalty area, drew Hansen and nonchalantly lobbed the ball over his head into the inviting net. Parkhead erupted in joy.

Three minutes later, Tom Rogic, just on for Ntcham, picked out Sinclair smack in front of goal, but his touch let him down and the keeper claimed the ball.

Meling was next to go into the referee’s book after a clumsily challenge on Forrest as the winger prepared to dart past him on the flank.

Now all eyes are on Trondheim a week tonight. It’s going to be tough, that’s for sure, but with players such as Edouard  and Ntcham in the line-up and always prepared to sparkle some stardust there must be a very good chance of the Hoops advancing to the next stage.