Celtic Quick News on News Now
You are at:Home»Latest News»CELTIC CAN CLINCH FIVE IN A ROW AGAINST ABERDEEN
By CQN Magazine on 12th April 2016 Latest News
CELTIC have the opportunity of clinching their fifth successive Premiership League title against Aberdeen. 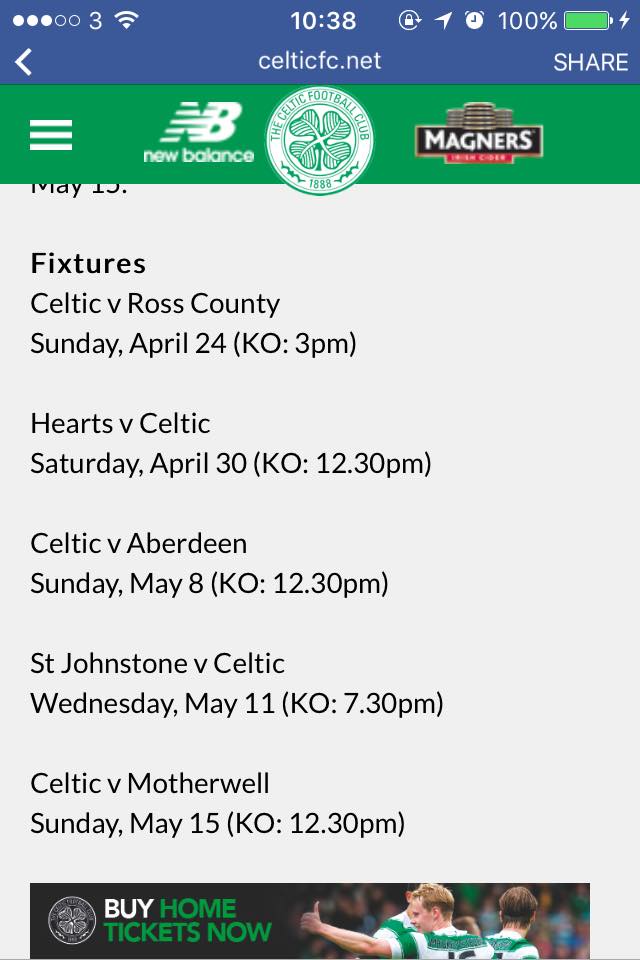 That’s the possibility after the post-split fixtures were announced by the SPFL this morning.
Ronny Deila’s champions are eight points clear with five games to go as they target a domestic double.
If both clubs win their next two matches, the Hoops will have the chance to seal the flag by beating the Dons at Celtic Park on Sunday, May 8. The match will be televised live by Sky Sports, kicking off at 12.30pm.
The earliest they could win it would be against Hearts at Tynecastle on Saturday, April 30. Sky Sports plan to show the encounter live with a 12.30pm start.
But that would require the Pittodrie side slipping up again when they visit St Johnstone in their first game after the split on Friday, April 22.
Celtic kick off the fixtures with a home game against Ross County on Sunday, April 24.
The Parkhead side travel to Perth to take on St Johnstone on Wednesday, May 11. That, too, is scheduled to be beamed live by the satellite channel with a 7.30pm start.
The Hoops bring down the curtain on their league campaign against Motherwell in Glasgow on Sunday May 15 with a 12.30pm kick-off. Sky Sports will show that live, too.
Hearts’ attempt to overtake the Dons in second place could be determined when the Edinburgh outfit travel to Pittodrie on the penultimate matchday on Thursday May 12.Relegation-threatened Dundee United, eight points adrift, travel to Kilmarnock – who currently occupy the relegation play-off spot in 11th – on the final day of bottom-six fixtures on Saturday May 14.
The final Dundee derby of the season will go ahead at Dens Park on Monday, May 2.
The team finishing bottom is relegated, with the side in 11th place going into a two-legged play-off final against the Championship outfit left standing after a quarter-final and semi-final.