The Greek hitman, scorer of 12 goals since the turn of the year including two hat-tricks, limped off during the first-half of last weekend’s 7-0 romp aagainst St Johnstone at Parkhead.

Ange Postecoglou allowed Giakoumakis time to overcome the hamstring problem, but had to admit defeat and leave the 27-year-old international forward from his squad to face Giovanni van Bronckhorst’s team. 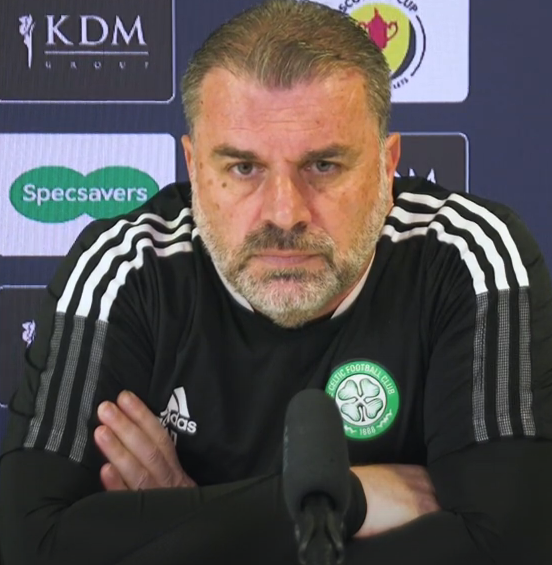 The Hoops boss said: “With Giakoumakis, the prognosis wasn’t anything too serious. It will probably keep him out this weekend, but we are pretty confident he will be available next weekend.

Postecoglou moved Daizen Maeda in from the left to lead the attack against the Perth outfit when Giakoumakis, scorer of the second goal, was forced off. He put on substitute Liel Abada and switched Filipe Jota to the left.

That is the likely front three against the Govan club although Kyogo Furuhashi came on for the last 16 minutes for his first appearance of 2022. It is highly unlikely the Japanese raider, who has claimed 16 strikes this season despite his lengthy lay-off, will be in from the start.

HAMPDEN HERO…two-goal Kyogo Furuhashi with the newly-won League Cup at Hampden in December.

Postecoglou, speaking to Celtic TV added: “I don’t think he is ready to play 90 or 120 minutes, but he IS ready to play. He was back in and got some match minutes last weekend and he has had two solid weeks of training with the group.

“We train pretty hard and he has matched those levels, so that means he is ready to play.

“Can he see out 90 or 120? Unlikely because he has been out for so long, but he is ready to play and that’s the important thing.”

Celtic are looking for their third successive victory over their Glasgow rivals after winning 3-0 at Parkhead in February and following that up with a 2-1 triumph at Ibrox earlier this month.