THE great Celtic transfer guessing game is being cranked up with the Hoops linked to two attacking stars.

Sunderland frontman Charlie Wyke is poised to reject offers from elsewhere to join up with the Ange Postecoglou revolution, according to the Northern Echo

Another report claims 30-year-old midfielder Aaron Mooy, a former St Mirren, Huddersfield and Brighton player now with Chinese side Shanghai Port, is on the Parkhead radar.

The Parkhead side have allegedly held initial talks with 28-year-old Wyke and his representatives and are now ready to firm up a formal offer to the Teesider, who is a free agent following the end of his deal at the Stadium of Light.

The Wearside outfit have offered an extension while Championship clubs Cardiff City, Nottingham Forest and Millwall are also chasing the marksman. 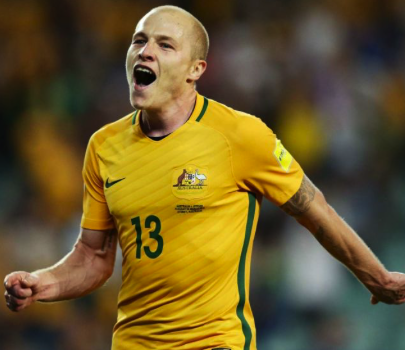 WIZARD OF OZ…Aaron Mooy in action for Australia.

Australian international Mooy is apparently in with the chance of a reunion with his former Socceroos boss Postecoglou.

A sporting director is expected to be appointed at Celtic, but the new manager may also look to use his own contacts and a link has emerged with his ex-player.

According to Australian outlet SBS, there is serious talk in Shanghai about an approach from the Glasgow giants who are resigned to losing Odsonne Edouard, Kristoffer Ajer and Ryan Christie in the summer while Leigh Griffiths is still wondering if his 12-month option will be activated.

Mooy may well be keen on a return to Europe due to tough restrictions in the Chinese Super League. Covid rules insist all players are confined to two ‘bubbles’ in the cities of Guangzhou and Suzhou and can only leave their hotel to train and play games.

The forward has a Scottish wife and his current club would be unlikely to demand a huge fee to let him leave.