Celtic Quick News on News Now
You are at:Home»Football Matters»CELTIC MUST ATTACK,’ VENNEGOOR OF HESSELINK
By CQN Magazine on 16th September 2015 Football Matters
JAN VENNEGOOR OF HESSELINK insists Celtic MUST attack Ajax in Amsterdam tomorrow.
The former Hoops striker would like to see Ronny Deila tell his team to take the game to a relatively-inexperienced Dutch outfit – even on their own soil.
Big Jan said: “Celtic need to grab them by the throat and dominate them. Ajax will have a lot of the ball, loads of positional play, passes and possession.

“Sometimes it can be a case of just booting the ball up the park and getting the result. It sounds really easy, but against teams who want to play it’s sometimes the best way.

“I was sitting in a bar with my old Celtic team-mates last week talking about it. Look at some of the games we played. We weren’t always the best players on the pitch. But sometimes you need to get your head down and get the result.

“Celtic might need to do that in Holland and against Fenerbahce.”

Vennegoor of Hesselink added: “Ajax are always a young team. They stick players in early. They teach them from eight years old. Everyone knows their positions and the formations.

“It means they can put them in the first team they won’t struggle. They are technically good players. Sometimes you need something else, though. That’s the big criticism in Holland.

“They have young players, but it’s difficult when you keep selling them. It’s the same for Celtic. 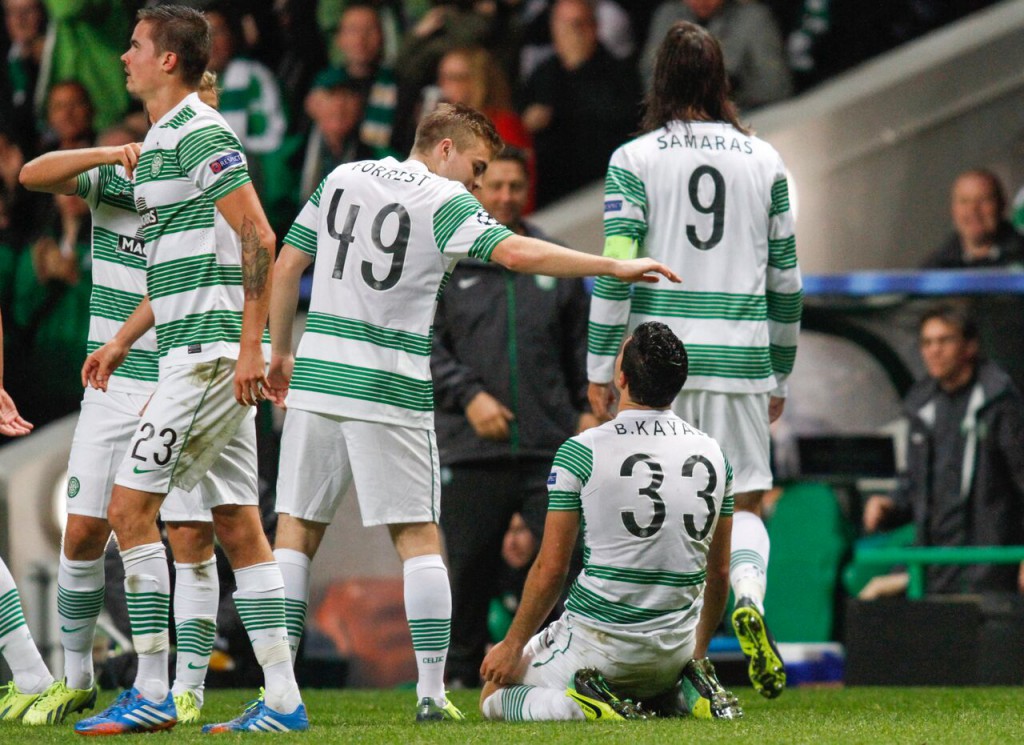 “These days young players in Holland want to get into the teams and then look to the Premier League in England or Serie A.

“It’s not like 10 years ago when they wanted to play for the big teams in Holland, like Ajax, PSV and Feyenoord. It’s like that for Celtic now.

“Ajax are cruising in the league, they have scored a lot of goals and haven’t conceded many, but they struggled in the qualifiers against Jablonec.

“They won 1-0 at home, but they had a lot of critics. Frank de Boer likes to play the Ajax way, with lots of passing and good football.

“But Jablonec had 10 men behind the ball and they never created anything.

“Leading 1-0 was a good enough result, but they really struggled over there. They went down to 10 men after 60 minutes, but managed to get through.”

The ex-Holland international said: “Playing in the Europa League is the reality for Ajax and Celtic right now. Celtic were already in the pot for the Europa League, but Ajax still had to qualify.

“But these are two teams who want to be in the Champions League. Hopefully, they can push on and get back there. With Fenerbahce in there, this is a fun group though and there should be some good games.

“I think the games will be very close. Celtic and Ajax played in the Champions League a few years ago and it was tight so it could be like that again.

“Fenerbahce away is going to be the really difficult game, but anything can happen in the other games.

“There is not too much between Ajax and Celtic.

“The young Ajax players will need to learn during these games so maybe that can be an advantage for Celtic.

“They already have experience of playing in Europe and that can help them impose themselves on Ajax.

“Celtic went close against Malmo. The late goal in Glasgow really killed them. It was the same for Ajax against Rapid Vienna.

“Everyone though they would go through when they went two goals up before half-time in the first leg in Austria.

“But they scored a couple of goals and all of a sudden everything changes. It cost them as they lost the return leg 3-2.

“It’s such small details which decide for these teams.”