The midfielder, who agreed to the Hoops switch on Friday along with his countrymen striker Daizen Maeda and versatile left-sided performer Yosuke Ideguchi has been delayed due to Cup commitments with his former club.

Hatate left Japan last night and is due in Scotland at some stage today.

The 24-year-old star has accepted there will be many challenges in a new country after accepting a four-and-a-half year contract to join the Ange Postecoglou revolution. 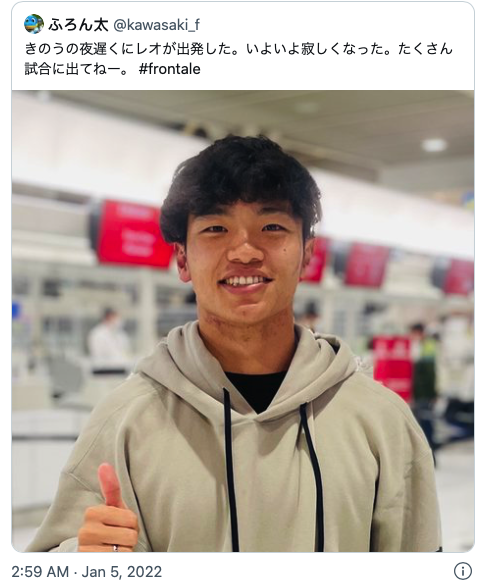 ON HIS WAY…Reo Hatate in a Japanese airport.

Hatate, speaking to the Scottish Sun, said: “I really enjoyed my days at Kawasaki Frontale, but I have I have decided to move to Celtic. It was a short time of two years, but I had a lot of experiences.

“I have come this far with the support of my family, staff and team-mates and I am so thankful and grateful.

“One of my dreams was to play abroad. I think I will struggle with the football, personal life, language, eating and many other aspects.

“However, I want to grow and absorb a lot of things as a person and a player.

“I give many thanks to the club for respecting my decision and to the supporters.

“I will continue to do my best in my own way.”

Kyogo Furuhashi was the frontrunner in the Hoops’ raid on the Far Eastern market when he joined in a £4.6million move from Vissel Kobe in late July. The pacy international has already fired in 16 goals, including a double in the Premier Sports League Cup Final triumph over Hibs at Hampden last month.

Maeda and Ideguchi have already met some of their new team-mates at Lennoxtown and they could be joined by Hatate tomorrow if there are no hitches.