Celtic Quick News on News Now
You are at:Home»Match Report»CLASSY EDOUARD LEADS THE WAY
By CQN Magazine on 14th July 2018 Match Report
CELTIC 4  STANDARD LIEGE 1
ODSONNE EDOUARD again showed a flash of the quality that enticed Brendan Rodgers to splash a record £9million when he scored a sublime goal as Celtic sauntered to a pre-season triumph over their Belgian rivals at Parkhead this afternoon.
The French ace, with the ability to breeze around the surface and then accelerate into action, got the opening goal as the Hoops fans watch the sparkling sunshine football provided by their favourites.
In the 14th minute, Edouard accepted a pass from Callum McGregor, instantly took control of the ball, sized up the situation in a heartbeat and lobbed an unstoppable effort from the edge of the box into the top corner. The keeper could only stand in admiration.
That cleared the way for the first of Brendan Rodgers’ two line-ups to open up a 3-0 lead before the all-change team made its appearance for the second-half. 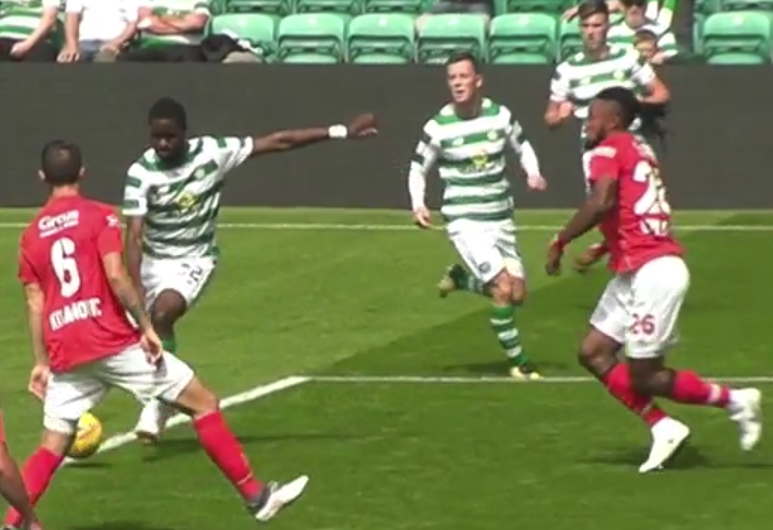 GOAL No 1…Odsonne Edouard prepares to flight the opener into the top corner.
The Hoops came close to taking the lead in the 11th minute following a breathtaking surge from the back by Kristoffer Ajer.
Bewildered Belgians furiously backtracked as he slid a pass in front of Edouard easing his way in from the right. He stroked a perfect ball towards the menacing Moussa Dembele, lurking on the 18-yard line.
The powerhouse frontman, looking lean and in the mood, zipped in a vicious left-foot drive that almost demolished the crossbar as his effort smashed off the woodwork and ricocheted back into play.
Three minutes later came Edouard’s exquisite finish and in the 19th minute Dembele came close to doubling the advantage with a low angled attempt that flashed wide of the keeper’s right-hand post.
But he had better fortune, though, in the 21st minute when he scored a second goal which emphasised his aggressive approach to the new campaign. 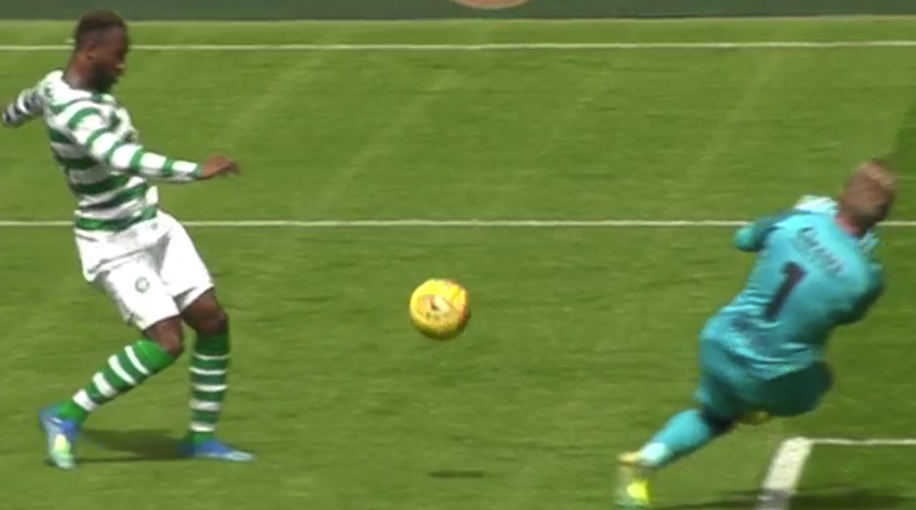 GOAL No 2…Moussa Dembele clips the ball over the keeper.
Dembele challenged outside the box and followed the ball into the penalty area to put pressure on another Standard defender. He brought the ball under control, lured Jean-Francois Gillet from his line and nonchalantly swept an effort into the far corner.
The Belgians, stung into action, had two quickfire shots on target, but Scott Bain got down well to hold the ball confidently on both occasions.
On the half-hour mark, McGregor sidestepped the overworked Belgian No.1 and unselfishly tried to set up Edouard in front of goal, but the ball was frantically booted for a corner-kick.
But he had no such inclination to pass up an opportunity in the 41st minute when he virtually passed the ball into the rigging for the third goal.
This time Olivier Ntcham was the provider with a well-paced pass in front of the classy midfielder and he slotted it wide of the stranded goalie, the ball bouncing in off the far post.
The visitors were having great difficulty in coming to terms with the slick passing of the Hoops on the new surface, the ball being whipped around with uncanny accuracy. 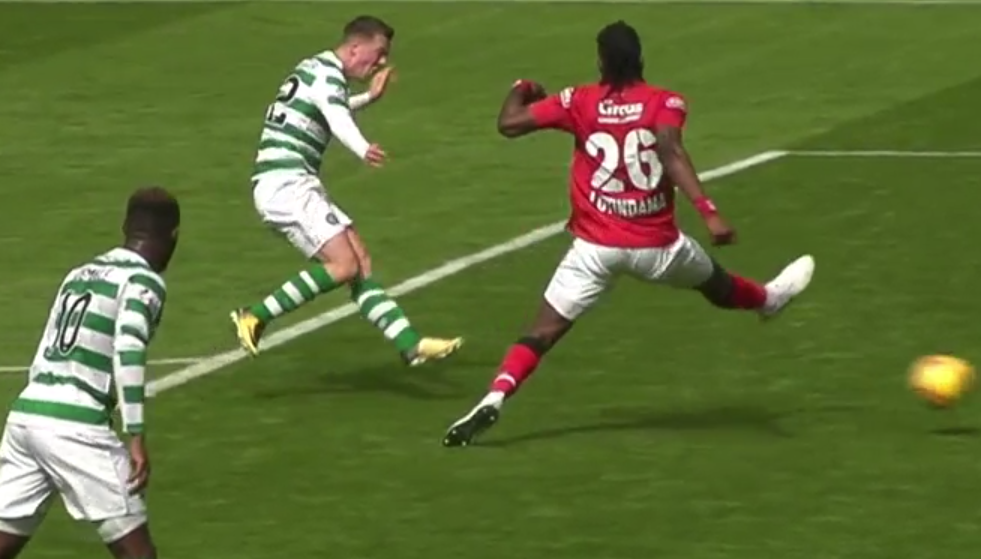 GOAL No 3…Callum McGregor slides in an unstoppable left-foot effort.
The interval duly arrived as the home fans sat back to see the likes of Scott Sinclair, who had taken over as skipper, Marvin Compper, Ryan Christie, Mikey Johnston and Ewan Henderson go into action with a tough act to follow.
The pace dropped off in the second-half as the new Celts tried to find a rhythm to settle into the flow of the encounter.
There was a scare in the 56th minute when a free-kick from the left – conceded by Anthony Ralston – found a Belgian completely unmarked at the far post. Conor Hazard elected to remain on the line and the Standard raider wastefully headed over the bar.
Goal No.4 wasn’t far away, though, and it duly arrived in the 62nd minute when, following a miss from Christie, Sinclair slid a pass in front of Johnston and the enterprising winger lofted the ball over the outrushing keeper for a fine effort. 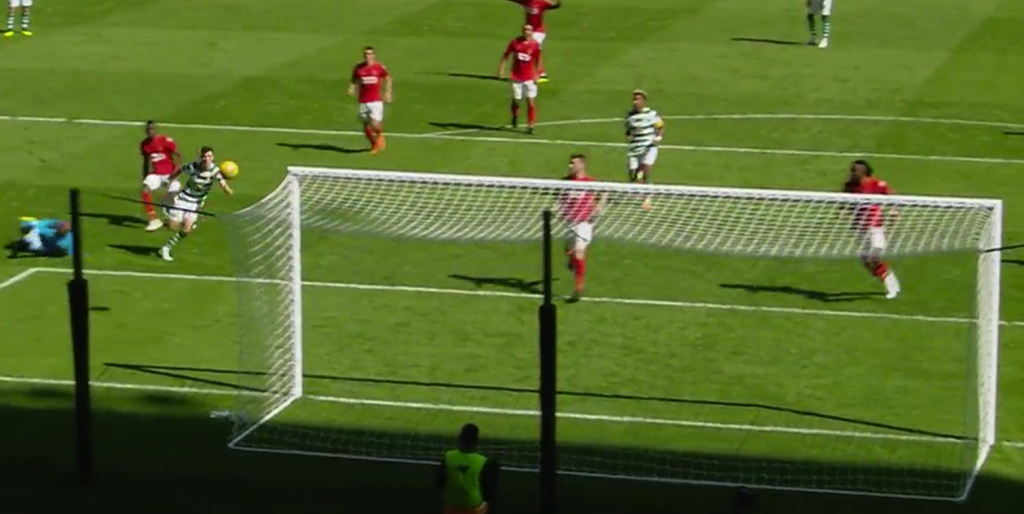 GOAL No 4…Mickey Johnston clips the ball over the keeper with Scott Sinclair getting a close-up view.
Sinclair knocked a close-range flick into the net in the 70th minute, but was flagged offside.
Two minutes later, the visitors scored when Calvin Miller was beaten on the left and Paul-Jose M’Poku got in front of Stephen Welsh to wallop a close-range shot into the roof of the net with Hazard motionless.
Only moments later, Welsh set up Johnston, but the winger’s low drive was just too wide.
The game was then held up for a couple of minutes when the sprinklers suddenly made an appearance and the players took advantage by heading for the touchline for an impromptu water break.
There was another delay when Welsh and Eboue Kouassi went for the same high ball and there was a clash of heads with the Ivorian coming off worst.
Thankfully, he returned to the action as Rodgers’ outfit coasted to a win their play deserved.
Now all eyes are on Parkhead on Wednesday as the Hoops go through the formality of dismissing Alashkert and booking their place in the nest stage of the Champions League.
FIRST-HALF TEAM: Bain; Hendry, Ajer, Simunovic, Tierney; Brown, Ntcham; Forrest, McGregor; Edouard, Dembele.
SECOND-HALF TEAM: Hazard; Ralston, Welsh, Compper, Miller; Eboue, Allan; Johnston, Henderson, Sinclair; Christie. Subs: Benyu, Church, McInroy
Click Here for Comments >
Share. Twitter Facebook Google+ Pinterest LinkedIn Tumblr Email
Previous ArticleCONFIRMED: RODGERS NAMES TWO TEAMS!
Next Article ‘NO HIDING PLACE FOR SLACKERS,’ RODGERS