CELTIC boss Brendan Rodgers has admitted he has no idea when Kris Commons will be fit.

The Irishman insists the injured 32-year-old midfielder must attain full fitness to get into his squad.

Commons has one year left on his deal and would like to stay for even longer because of of his affection for the Hoops and the club’s fans while his family are settled in Glasgow. 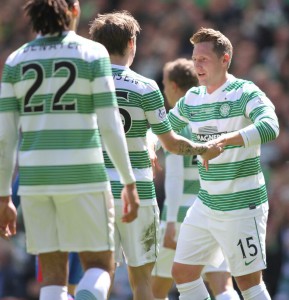 No-one on the Parkhead playing staff has scored or set up more goals then the former Scotland international, but Rodgers said: “Kris Common trained separately to the group. He’s a long way off in terms of intensity.

“He has been working behind the scenes on the injury, but, in terms of football fitness, he won’t be available for a while.”

Rodgers enjoyed his first home game as Celtic manager with the five-in-a-row champions beating Bundesliga giants Wolfsburg 2-1 on Saturday, but revealed he can’t wait for the first time Parkhead, now with a safe standing section, is full to the rafters.

He added: “There is no doubt the Celtic supporters have always been the 12th man.

“It is a wonderful stadium and, when it is bouncing and rocking here, there are not many to touch it.

“It was interesting to see the standing area and the boys over there were non-stop. They were absolutely brilliant.

“The players respond to that. As a supporter, I hope they can see we are looking to progress and evolve here as a team, but we need them and we will need them for every single game of the season.

“If we can get them right behind the team, it is going to be a tough place for opponents to get a result, for sure.”

Get your copy of Once Upon a Time in the Kingdom in Govania – because it is good to laugh at Rangers (both the dead one and the new one). Only at www.cqnbookstore.com – you will love it, guaranteed!