CELTIC went into tonight’s encounter safe in the knowledge they hadn’t lost against Dundee at Dens Park in 30 games.

It didn’t take them too long to realise that run was never in danger on this occasion with the Hoops cruising to a four-goal advantage by the interval.

Tom Rogic, Scott Sinclair, with a penalty-kick, James Forrest and Odsonne Edouard were all on the scoresheet in the opening period and Ryan Christie completed the landslide with an exquisite goal early in the second-half.

The only surprise was that it took fully 20 minutes for the rout to kick off on Tayside. Twenty-seven minutes later, Jack Hamilton had been beaten a further three times and the Tayside outfit were featuring in their own personal horror story on Holloween as they were ripped apart by a clockwork Celtic side.

Rogic, making his 150th appearance for the team, was as irresistible as he was against Hearts at Murrayfiield on Sunday. He was drifting past defenders with that easy, loping stride and his opening goal was a thing of beauty.

Callum McGregor, who was pinging the ball all over the place with breathtaking accuracy in his anchorman role in midfield, was involved alongside James Forrest to present the chance to the Aussie ace.

Rogic ambled onto the pass, took a couple of touches, amazingly the Dens rearguard backed off him and he accepted the invite to have a go at goal from outside the box.

His left foot swooshed the ball high over Hamilton’s despairing, clawing fingers into the keeper’s top left-hand corner of the net.

It was nonchalance combined with menace and it was the perfect way for the champions to claim the breakthrough effort against opponents who must have been fearing the worst. 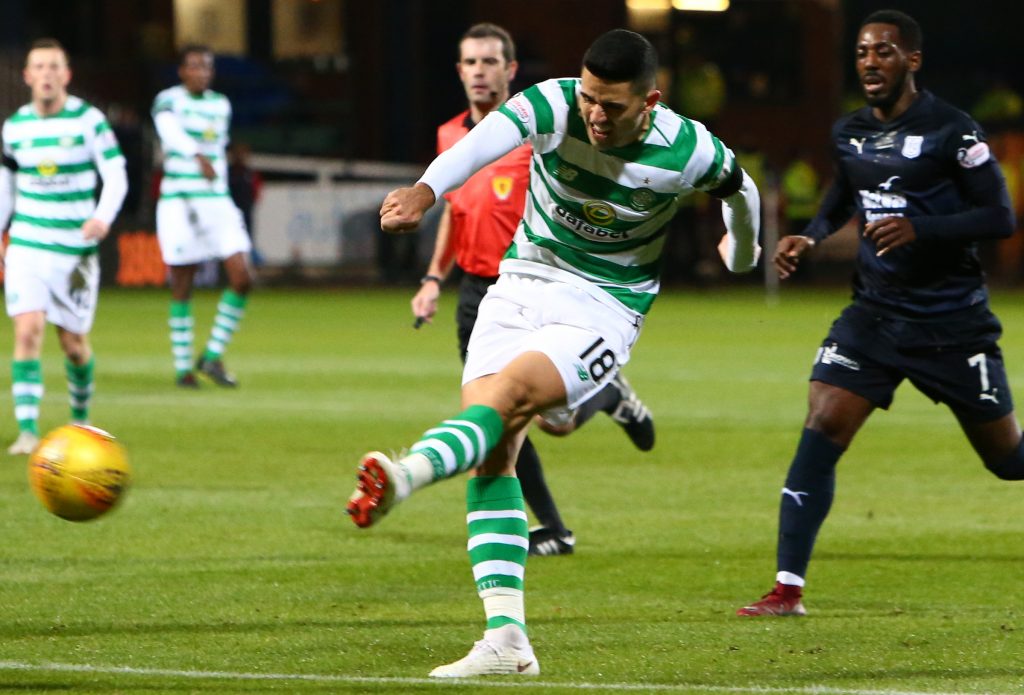 The green-and-white waves continued to pound away at the beleaguered Premiership strugglers and it was always going to be a question of how many.

Twelve minutes later, Hamilton was fishing the ball from the back of his rigging for a second time. A delightful flick inside from Rogic allowed Mikael Lustig the opportunity to storm through.

A panicking Ryan Inniss frantically tried to intervene and only succeeded in sending the Swede toppling to the turf and referee Alan Muir pointing to the spot before flashing the inevitable yellow card.

Rejuvenated Sinclair strode forward with confidence and slid the ball to Hamilton’s left as the keeper took off for the right.

GOAL No.2…Scott Sinclair sweeps in a penalty-kick with unerring accuracy.

In the 38th minute, number three flashed into the Dens net courtesy of Forrest at the end of a marvellous sweeping move from midfield and down the left. McGregor and Kieran Tierney combined with the left-back cutting the ball into the tracks of Forrest.

The winger, so willing to work all night, lunged forward and sent the ball spiralling away from the sprawling Hamilton for another brilliant effort. 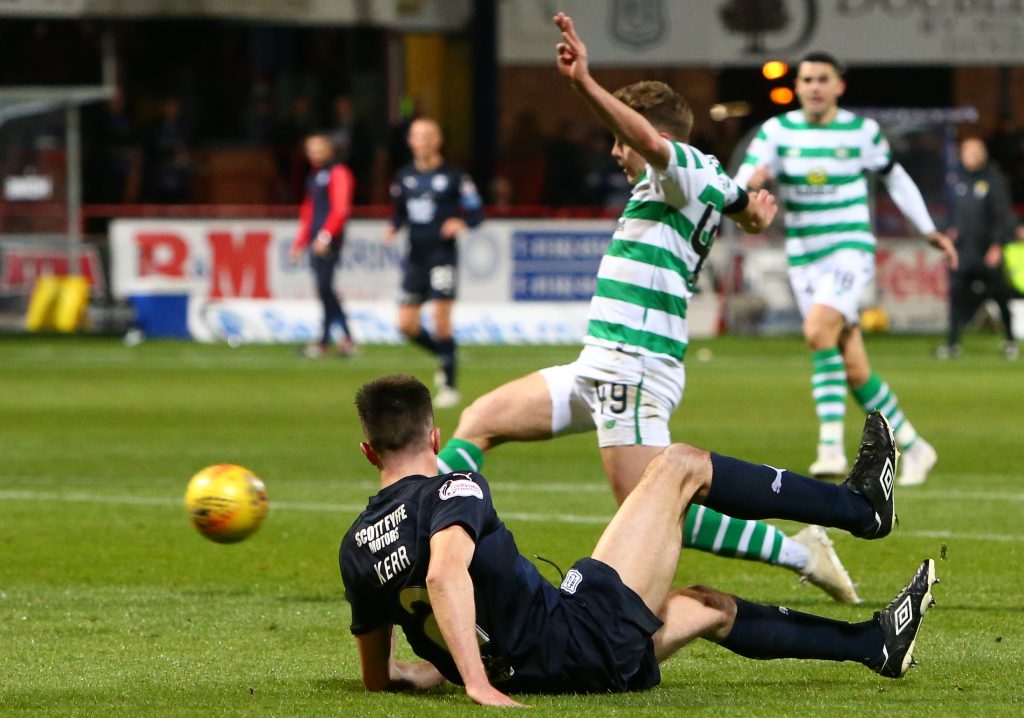 GOAL No.3…James Forrest makes no mistake with a right-foot lunge.

And two minutes into first-half stoppage time, Celtic brought down the curtain on a satisfying opening period with a fourth strike.

Once again, there was a lightning move that shuttled the ball with pace and precision with Forrest, Sinclair and Tierney all involved in the build-up before Odsonne Edouard was left with the simple task of turning No.4 wide of the exasperated Hamilton. 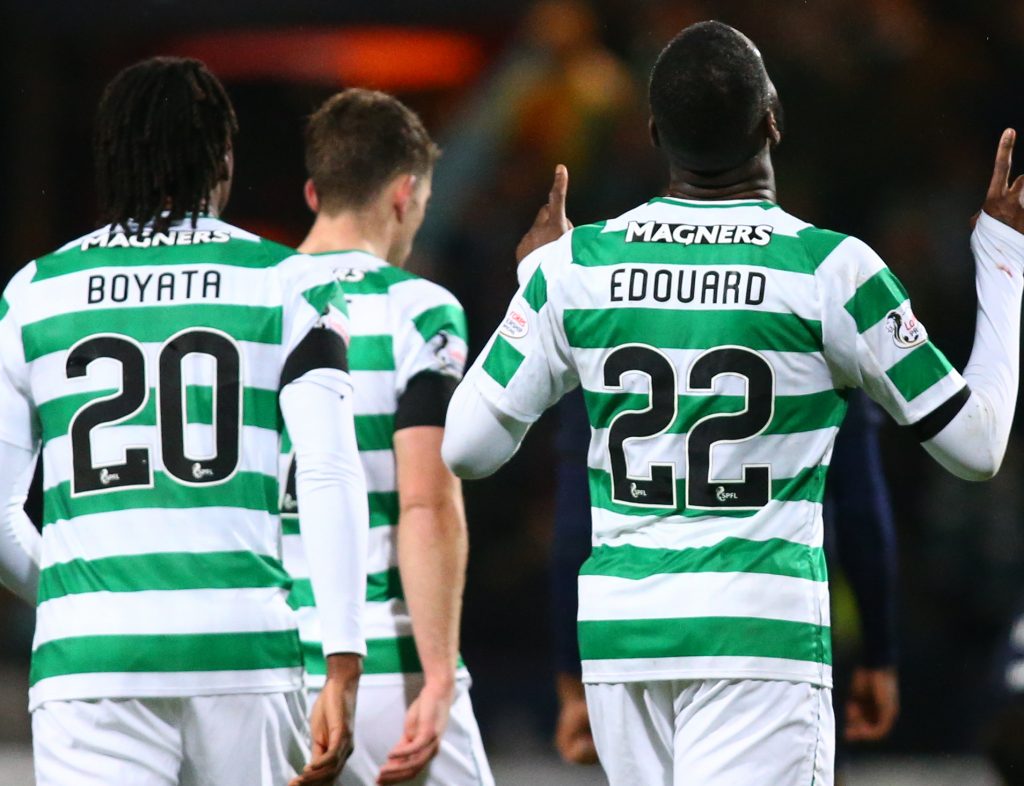 GOAL No.4…Odsonne Edouard turns away in salute after a clever effort.

There were only three minutes gone of the restart when Edouard split the Dundee back lot with a neat through ball and Christie raced onto to it to whip an effort with the outside of his left foot low into the net. Stunning!

Brendan Rodgers introduced Aussie kid Daniel Arzani and Lewis Morgan for Rogic and Edouard in the 57th minute which made a lot of sense with the points in the bag and a massive game against Hearts coming up on Saturday.

Unfortunately, the Aussie kid was stretchered off in the 79th minute when it looked as though he had twisted a knee in a sharp turn.

However, he was spotted walking near the touchline later on, so, hopefully, the injury will not be as bad as was first feared.

After all, this was a night where the script was followed from first to last.

And Celtic are now just four points adrift of Hearts who were held to a goalless draw by Hibs at Tynecastle.

There’s every chance that gap will be cut to a solitary one after the action at Parkhead on Saturday.