BRENDAN RODGERS celebrated his century of Celtic victories with a resounding 5-0 triumph over Dundee at Dens Park tonight.

The champions moved to within four points of Premiership pacesetters Hearts who were held to a goalless draw by Hibs at Tynecastle.

And the Edinburgh side arrive at Parkhead on Saturday for a game to which Rodgers has admitted he is looking forward.

A replay of the Sunday display against Craig Levein’s side – which ended in a landslide 3-0 success for the Betfred League Cup holders – would see the Hoops edge to just one point of returning to the pinnacle as they search for their eighth successive title.

Rodgers watched goals from Tom Rogic, Scott Sinclair (penalty), James Forrest and Odsonne Edoaurd give his side a 4-0 half-time lead on Tayside and Ryan Christie added to the tally with a superb effort shortly after the interval.

There were other opportunities – most notably a dreadful miss from Kieran Tierney – as the vicitors settlked for five.

OOPS…Kieran Tierney hits one past the post from four yards.

Daniel Arzani’s debut as a second-half substitute was cut short when he was stretchered off near the end and Dedryck Boyata was also replaced with 10 minutes to go.

The Celtic boss said: “It was a perfect performance, apart from a couple of injuries.

“I thought the technical level was outstanding, there were very good well-worked goals and a huge credit to the boys’ fitness and how they pressed the game, their willingness to run right the way through to the end.

“It doesn’t matter whether it’s a semi-final in front of 60,000 or a game like tonight, they were willing to work and their hunger and appetite was very clear.

“Five good goals, the possibility of one or two more, so our creativity was very good, as well.” 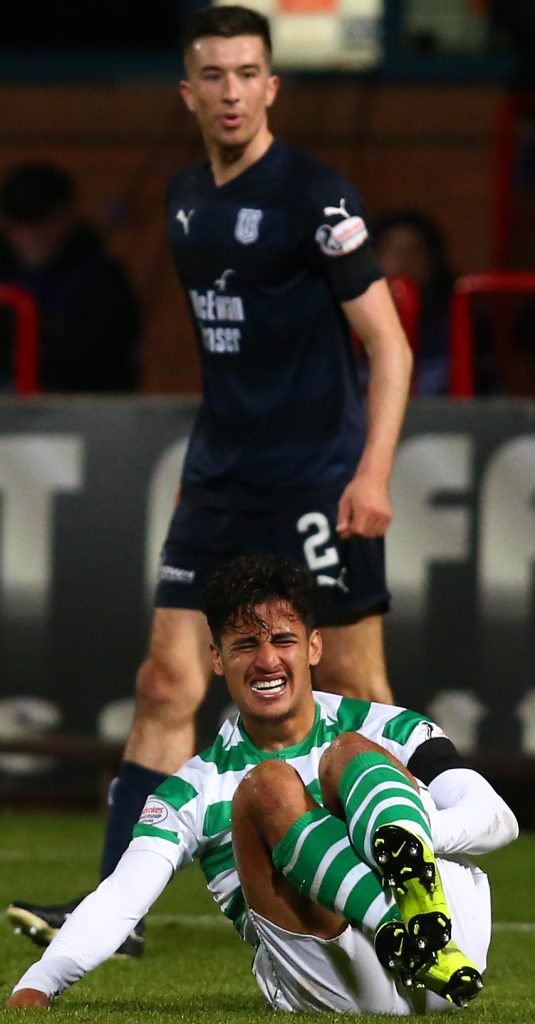 He said: “Daniel looked as though he twisted his knee, so that will be assessed.

“However, I noticed him clapping the fans on his way off on the stretcher!

“Dedryck just felt a little bit of cramp in his calf, so we took him off as a precaution.”

Rodgers turned his attention to the weekend visit of Hearts after watching his team score 18 goals in their past four domestic games.

He added: “We just have to keep chipping away. We needed to win tonight and we won very well. It takes us into Saturday’s game and we have got to keep pushing and play with that intensity.

“So, we’re looking forward to it and it should be a really good game.”