FORMER Celtic defender Charlie Mulgrew admitted Celtic “played some right good stuff” as they romped to an impressive 3-0 triumph at Tannadice at the weekend.

The ex-Hoops star was part of the Dundee United side that was swept away by a performance from Ange Postecoglou’s line-up that dominated from start to finish.

Joe Hart was called upon to make one save in a lop-sided 90 minutes-plus and the 34-year-old 75 times-capped England international keeper underlined his powers of concentration when he dived superbly to his left to push away a rasping drive with his team leading 2-0 at that stage. 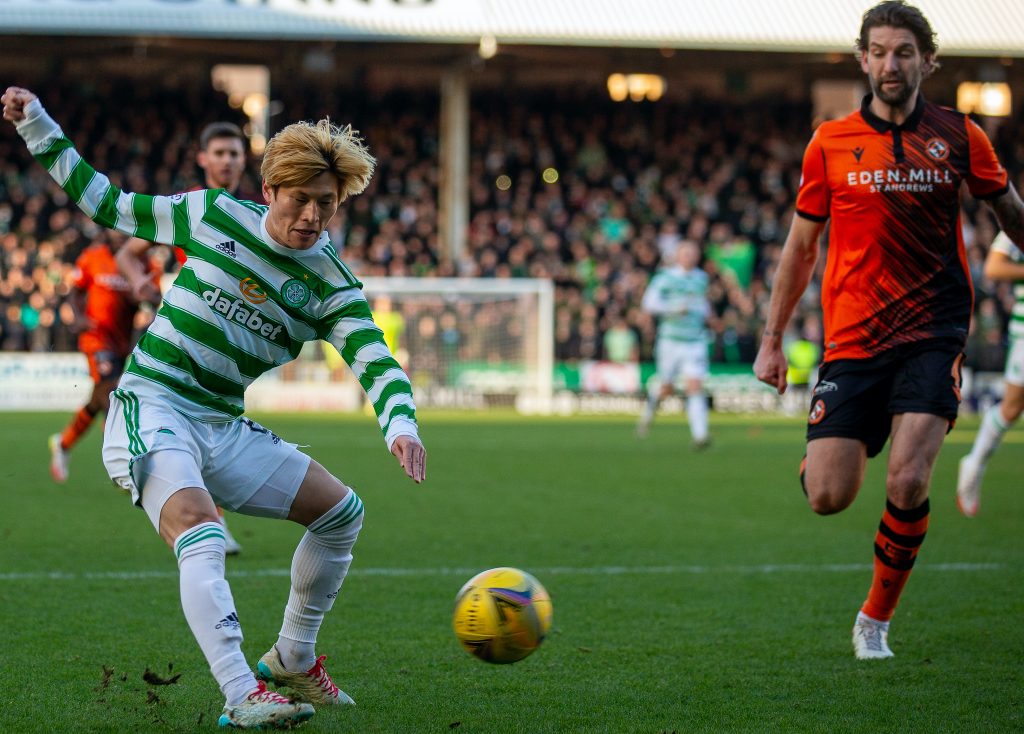 WATCHING BRIEF…Charlie Mulgrew looks on as Kyogo Furuhashi fires in a cross.

But it was in the middle of the park and up front where the Parkhead men caught the eye and goals from Tom Rogic, a magnificent solo effort that saw him glide past three challenges before curling an unstoppable effort beyond the stranded Benjamin Siegrist, and David Turnbull, with a spontaneous piece of wizardry, had the visiting team coasting at the interval.

Remarkably, it took until nine minutes from time before they completed the scoring when Liam Scales, who came on for his Premiership debut just six minutes earlier, slotted away a left-foot drive following brilliant work from Nir Bitton and Liel Abada.

United attempted to adopt the same tactics that earned the Tayside outfit a point in a 1-1 draw in Glasgow in September, but they had no answer to rampant opposition on this occasion.

“We came up against a class side, but we’ve got to look at ourselves and it’s about what we do.”

SINKING FEELING…Charlie Mulgrew is too late to prevent David Turnbull netting No.2.

The versatile Scotland international defender, speaking to the Glasgow Times, added: “We went into the game and didn’t expect it to be that one-sided. But that can happen against Celtic. They are a good team.

“They took positions all the time. When they had the ball one pops out of position and another pops in. It’s not easy to deal with.

“Maybe if you get them on and off day then you can get close to them. But, we didn’t this time and we’re gutted about that.

“They started well from kick-off and got into good positions. There wasn’t a disappointment in their team. To an extent, you’re only as good as a team will let you be – and Celtic played well.

“You need to try and keep Celtic out as long as you can and then hopefully you can get a goal. Maybe get them on the break or keep it at 1-0 and get a goal. But we never did that.

“Through their great play, and our not so great play, it didn’t happen for us. Credit where it’s due to Celtic, they won the game, but we need to pick ourselves up.”