Celtic Quick News on News Now
You are at:Home»Latest News»THE THREE AMIGOS AND ME – DAVIE HAY TELLS ALL
By CQN Magazine on 16th November 2020 Latest News

Today, in another CQN EXCLUSIVE, the Hoops icon lifts the lid on the story behind the remarkable transfers as it appeared in his autobiography ‘The Quiet Assassin’ which was co-authored by Alex Gordon and published in 2009. 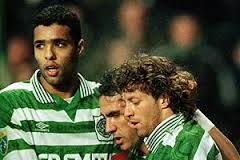 He had refused to return from Portugal for pre-season training and, reluctantly, he was sold to Spanish outfit Celta Vigo for £3.5million. I know the club did go out of their way to try to entice this exciting talent back to the east end of Glasgow, but he wasn’t interested. It was around this time he revealed he had a parrot at home called Fergus. I wonder who that was named after! Cadete did return to Glasgow a few years later for a short spell with Partick Thistle. He was a mere shadow of the striker who had terrorised defences in a brief but memorable stint with Celtic.

By the way, there was another Dutch player who had caught my eye while I was tracking big Pierre. He was a no-nonsense and uncompromising centre-half who was with a team called Willem 11. He was tall, athletic, virtually unbeatable in the air and extremely fast on the deck. He could use the ball, too. I put his name forward because I knew the Dutch side would accept £800,000 for him.