IF the aim of any author is to inform and entertain, then Stephen O’Donnell does a splendid job on both counts in his exceptional new book, ‘Fergus McCann v David Murray’.

It is the absorbing story of an intriguing bitter power struggle between two single-minded individuals on both sides of the Great Divide. McCann, of course, arrived in the midst of turmoil at Parkhead, a club on the abyss of a spectaculat financial fail.

In 1988, the team, led by the legendary Billy McNeill, had ushered in the club’s centernary year with an extraordinary league and Cup double. It was a fairy-tale that swiftly became a nightmare after a succession of dreadful boardroom decisions that eventually opened the door to McCann, a Celtic supporter who refused to take no for an answer. It would be another decade before the championship flag flew over Parkhead, but, with McCann at the helm, the journey back to domestic domination is fascinating and compelling one.

I believe Stephen O’Donnell nails it. The author’s research into this very readable offering is praiseworthy. He has forensically dissected the wheeling and dealing that became more important than events out on the football field on match day. 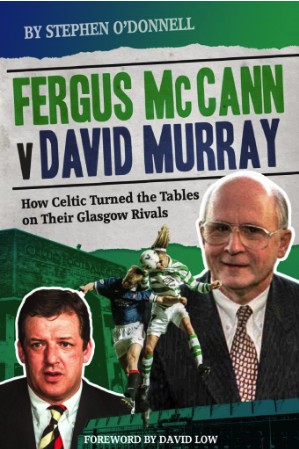 David Murray ruled the roost when McCann arrived in the early nineties. In his bludgeoning pursuit of glory, the Ibrox supremo was never slow to run up debts that would eventually come back to bite the club. At that stage, though, money appeared no object to a character who was utterly desperate to be in the spotlight when Rangers eclipsed Celtic’s feat of nine successive crowns during the halcyon days of Jock Stein between 1966 and 74. He was determined, too, to be afforded the red carpet treatment when they overtook the achievement. McCann had something to say about that particular dream.

Europe, too, was in his sights. Murray, a steel magnate and self-made millionaire, was hellbent in emulating Celtic’s 1967 achievement in Lisbon.

McCann arrived on the scene with what looked like the timing of a stray Davy Crockett supporter ten minutes after the Mexicans had ransacked The Alamo. Much work lay ahead of the man who shunned the limelight. Whereas Murray embraced showbiz, McCann would have taken it as a compliment to be termed a beancounter.

Murray would roll out Sean Connery, old 007 himself, at every opportunity – and make sure the media photographers were around to capture the images for posterity. On the other side of the city, McCann was more than content to examine spread sheets. He arrived with a five-year plan and his focus never wavered.

O’Donnell takes us skilfully through these years as this Galahad in a bunnet rode to the rescue of one of sport’s most famous sporting institutions which had found itself on its knees.

Much is made of the seemingly-pro Rangers press at the time. Or anti-Celtic, if you prefer.

I was sports editor of the Sunday Mail and fortunate enough to be in charge of the sports department of Scotland’s biggest-selling newspaper, read most weekends by three million people.

Yes, there were pathetic reporters from other media outlets who most certainly fawned over the Ibrox ruler and were more than delighted to dine at Murray’s table.

I am delighted to go on record to stress I was not one of them. Nor any of the Sunday Mail staff. Naturally, it is important to have an insider within two of the country’s biggest clubs in an effort to bring your readers exclusives on each occasion they shelled out their hard-earned cash for your journal.

I was given excellent information from within the corridors of power at Ibrox as well as Celtic Park. It was purely business. There were no clandestine meetings, no succulent lamb, no fine wines from the owner’s vineyards.

However, it is true to say you could see Murray’s enormous influence on some of the media outlets at the time. There were those who delighted in being spoonfed so-called ‘exclusives’ that the more discerning in the profession would dismiss as nonsense. A stadium with a state-of-the-art swivel pitch, retractable roof, hotels, casinsos. Yes, it all saw the light of day in some journals by sycophants who were only too happy to rush into print. Murray, who failed miserably at joining Rupert Murdoch and Robert Maxwell in his futile bid to become a media baron, loved the power, he thrived on being the puppetmaster.

Fergus McCann, on the other hand, was evasive, withdrawn and kept reporters at arm’s length. I was invited to Celtic Park with a few other hacks when Celtic’s new man in the hot seat was launching his ambitious share issue. I recall Dominic Keane did most of the talking that day.

McCann arrived as an enigma and left as a mystery. But he delivered on his promises.

I found this an extremely readable, informative and authoritative account from Stephen O’Donnell who appears to have gone about a monumental and difficult task with some relish.

I would not hesitate to recommend it to anyone who is interested in delving into a vital part of Celtic’s history.

* Fergus McCann v David Murray, Pitch publishing, £19.99. https://www.pitchpublishing.co.uk/fergus-mccann-versus-david-murray. If you prefer a personalised book signed by Stephen O’Donnell, he can be contacted on Twitter @stephenodauthor.