CELTIC midfielder Callum McGregor played his part in Scotland stopping the rot with a 2-0 win over Albania at Hampden last night.

The Scots went into the opening Euro Nations League encounter on the back of three successive defeats in friendlies against Peru, Mexico and Belgium where they had conceded seven goals and scored none.

But the Hoops playmaker, who had an outstanding 79 minutes before being replaced by Manchester United’s Scott McTominay, is convinced the victory will prove to be a turning point.

Alex McLeish’s side could not force the breakthrough goal in the opening 45 minutes before Hearts’ comeback striker Steven Naismith got the opener with a header that went in via Albanian defender Berat Xhimshiti at the start of the second-half.

McGregor said: “We were still positive at half-time. We were having success in getting up the pitch and creating a few chances, so it was all about keeping believing in the game plan and that we would eventually get the goals.

“Fortunately for us, we scored early on after the break and then got another to put the game to bed. It was good to win our first competitive game.

“We were after a win and we were able to take some positives from Friday night’s defeat from the Belgians, which helped us take all three points.

“This game was always the most important one because it was a competitive tie. If we hadn’t won on this occasion, then the negativity would have started to grow and grow. 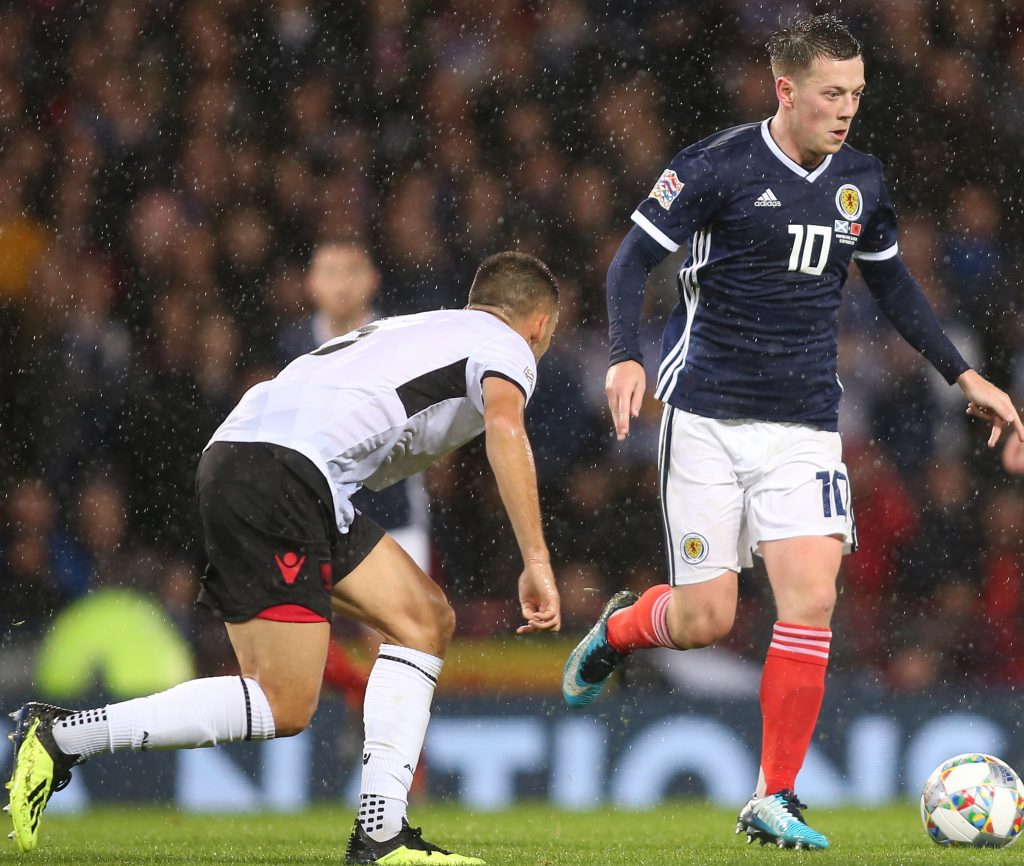 ON THE BALL…Callum McGregor poses a threat from midfield. Pic: Geo.

‘As it is, we got the win and it puts us level on points with Albania, with a game in hand – and we’ll go again next month.

“We’d lost three games in a row, but you saw the quality of the opposition we were up against – all three (Peru, Mexico and Belgium) were at the World Cup finals this summer.

“You want to test yourself and you understand what level we’re at and what we’re trying to build.

“But we delivered when it mattered and now we’ve got off to the good start which was what we wanted to achieve.”

McGregor also backed his nation to go from strength to strength under McLeish in his second spell in charge of the international team.

He added: “We’re learning all the time, the manager is trying to get his points across and you can see us getting there with every game we play.

“This win will be massive in terms of the group’s confidence and that will help going forward.

“We needed the victory after the Belgium game because you then trust what you’ve been doing and it gives you momentum. It’s also important that we got the fans behind us and that they start to believe in us as well.

“We want to get everyone onside as a nation again.”