CELTIC appear to be making life hard for themselves this season with a series of false starts.

On the Premiership front, they have lost the first goal in four out of eight games, including the last three against Kilmarnock, Hibs and Livingston.

The slow commencements have cost the champions five crucial points in Edinburgh and Lothian. At Easter Road, Kristoffer Ajer’s own goal handed the home side the advantage before Ryan Christie headed in a glorious equaliser in the 1-1 stalemate.

On Sunday, it got worse when 10-man Hoops – following the 25th-minute red card for Christie – allowed Scott Robinson a free shot at Fraser Forster which he took with some delight to thrash the ball high into the net. Lyndon Dykes claimed a second to condemn the champions to their first domestic defeat of the campaign.

Motherwell’s Liam Donnelly was given the opportunity to thump a low drive past Scott Bain in the second league game of the season, but, thankfully, the Hoops were able to come back and score five in a 5-2 triumph.

And it was the same story after Eamonn Brophy had given the Rugby Park outfit the initiative in Glasgow last month before Neil Lennon’s men responded with a three-goal answer.

Frustratingly, it’s been a similar tale in Europe where FK Sarajevo, Cluj (twice) and Rennes have all been in front to put the pressure on. 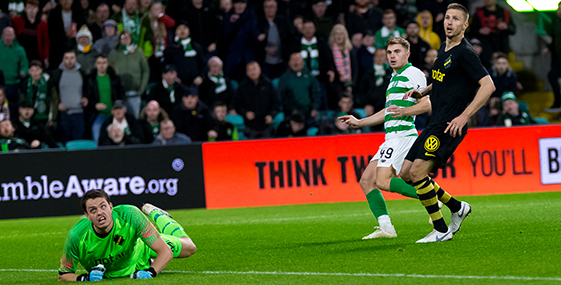 It’s something Neil Lennon will have to eradicate from his players’ game in the forthcoming outings, starting with Ross County at Parkhead a week tomorrow when the Premiership resumes after the international break.

There is also the Europa League Group E encounter against Serie A outfit Lazio coming up in Glasgow on Thursday, October 24 to copy into his plans.

Celtic are top of the section with four points from their 1-1 draw in France and a 2-0 home win over their Romanian Champions League conquerors.

With four games remaining, James Forrest acknowledged there is still a long way to go, but the Scotland international winger, speaking to the Celtic View, said: “Obviously, the focus will turn to Lazio now, but we haven’t been looking two or three games ahead.

“There are four really good teams in the group, so we know it’s going to be tough and I think it’ll go down to the last game.

“The manager highlighted the importance of starting well in games. That can affect everyone, so it was great that we started on the front foot against Cluj this time. That meant the crowd got behind us right away and that gave us confidence.

“Every team that goes away from home looks to quieten the home crowd with an early goal, so, as a home team, you need to be at it from the kick-off. You can’t afford to ease yourself into the game.

“We started on the front foot and the fans could see that we were hungry from kick-off. That’s what we want and that’s what the fan like to see.”