Celtic Quick News on News Now
You are at:Home»Football Matters»GMS GUNNING FOR ACTION REPLAY
By CQN Magazine on 10th March 2016 Football Matters
GARY MACKAY-STEVEN is looking for an action replay when Celtic meet Partick Thistle at Firhill on Saturday.
The winger, just signed from Dundee United in January last year, made his Hoops debut against the Jags in Maryhill – and netted in just THIRTY-EIGHT SECONDS! 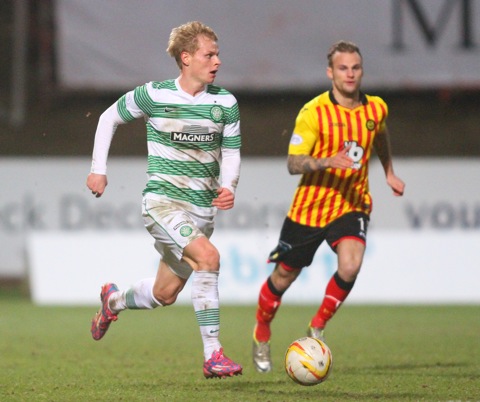 Mackay-Steven, who celebrated a 3-0 win on his first appearance, is aiming for a repeat in the lunchtime Glasgow derby.
He said: “It doesn’t seem that long ago that I made my debut. The year has flown in, but I’ve certainly got good memories of playing there and, hopefully, I can go back and do the same again.

“It was amazing to score. Everything happened so quickly, but there was no better feeling than scoring on my debut and I still get that same feeling now scoring for the club, so I’ll be looking to do that again.

“I feel the team is creating a lot of chances and I feel like I’m doing that, too, by getting into good positions, so I’m confident in front of goal and if a chance comes my way I’ll be looking to take it.

“Thistle are playing really well. They’re a good football team and they like to get the ball down and pass it. It’s always a tough game against them.

“However, I think it’s quite entertaining and, hopefully, now that we have managed to put a few clean sheets together, we will limit their chances.”
* Mackay-Steven was talking to the Celtic View, on sale now.