CELTIC great John ‘Yogi’ Hughes has fired a message to Leigh Griffiths: “Well done in reaching 117 goals for the club – now go on and beat my record.”

The 30-year-old hitman thumped in a memorable effort only six minutes after coming on as a 70th-minute substitute in the 3-3 draw with Aberdeen at Pittodrie on Sunday.

Griffiths can go one better than Hoops fifties’ hero Bobby Collins if he scores one against Lille in the Europa League Group H game in France tonight. A solitary strike will take the prolific Scotland international into Celtic’s list of 20 top marksmen in their history.

Hughes, a fans’ favourite in the sixties as he helped blast Jock Stein’s team into the history books, is the seventh-highest marksman in the haul of fame with 189 goals.

Big Yogi, speaking to Celtic book author Alex Gordon for another CQN EXCLUSIVE, said: “Leigh has a fair bit to go to catch up – 72 goals, in fact – but I would urge him to go for it.

“A couple of good seasons could see him get close and I would hope that will be the case. 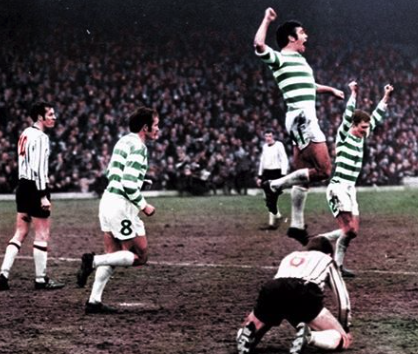 ROARING SUCCESS…John Hughes celebrates a goal against Dunfermline in 1970. Harry Hood and Davie Hay join in.

“I’ve always insisted records are there to be broken. I don’t know if Griff sets himself targets, but that is one he may want to focus on.

“Okay, the last couple of seasons have not been his most memorable during his days at Parkhead and I won’t go over old ground that has already been well covered.

“I have to say I have always liked Griff. He is such a lovely striker of the ball and he comes alive around about the box.

“His goal against the Dons last weekend simply illustrated all that is good about his finishing skills. He hadn’t long joined the action, but you could see he was eager to get involved immediately.

“He was in the right place in the penalty box to receive Tom Rogic’s pass and his effort into the top corner was simply unstoppable. Joe Lewis isn’t a bad keeper, but he hadn’t an earthly as soon as the ball left Griff’s boot. It was a goal all the way.

“I would like to think there are a lot more to come from the player. A fit Griffiths up alongside Odsonne Edouard makes Celtic a potent attacking force.

“They proved that last season. Listen, no defence likes to face up to players who do good work inside the box.

“Your opponents will try to keep you away from the danger zone, block you off, try to cut out your supply and so on. However, if the forwards are constantly switching positions and continually on the move it gives them real problems.

“Did you ever see Henrik Larsson stayed in the one position and wait for someone to drop the ball at his feet? No, me neither.

“Griff is like a shark the way he darts around the box and he can finish when he sees the opportunity.

“I think he has arrived at the right time in the season – remember, we have only played 11 league games – and I hope he is ready to go on a scoring streak.

“And if he beats my record I can assure you of one thing – I’ll be first in the queue to congratulate him.

TOMORROW: Big Yogi has another explosive EXCLUSIVE for CQN readers.