CELTIC’S surge towards an eighth successive title stalled again in a blankety blank performance against Hibs at Easter Road this afternoon.

In the fading moments, the champions were denied twice by breathtaking saves from keeper Ofir Marciano as he kept out Odsonne Edouard and Jozo Simunovic and now it’s all eyes on Kilmarnock at Parkhead on Saturday.

Unfortunately, even a win against the Ayrshire outfit will not ensure a championship-winning party and the wait could go on to Pittodrie or even Ibrox in the following weeks.

The Hoops have now shed five points at this venue without scoring a goal this season and they will again look at this as a chance spurned.

It was not the side’s best performance of the campaign by a long distance and James Forrest and Callum McGregor will have more enjoyable and profitable afternoons.

The same can be said for Olivier Ntcham who has not impressed in his three comeback games this year and it was a mystery he lasted until the 62nd minute before he got the hook with Tom Rogic taking his place.

Neil Lennon also threw on Scott Sinclair and Timothy Weah for Jonny Hayes and Forrest in the second-half in an attempt to get the three points required to set up a title showpiece in Paradise on Saturday.

Alas, the cards were not falling on this occasion and the wait goes on. 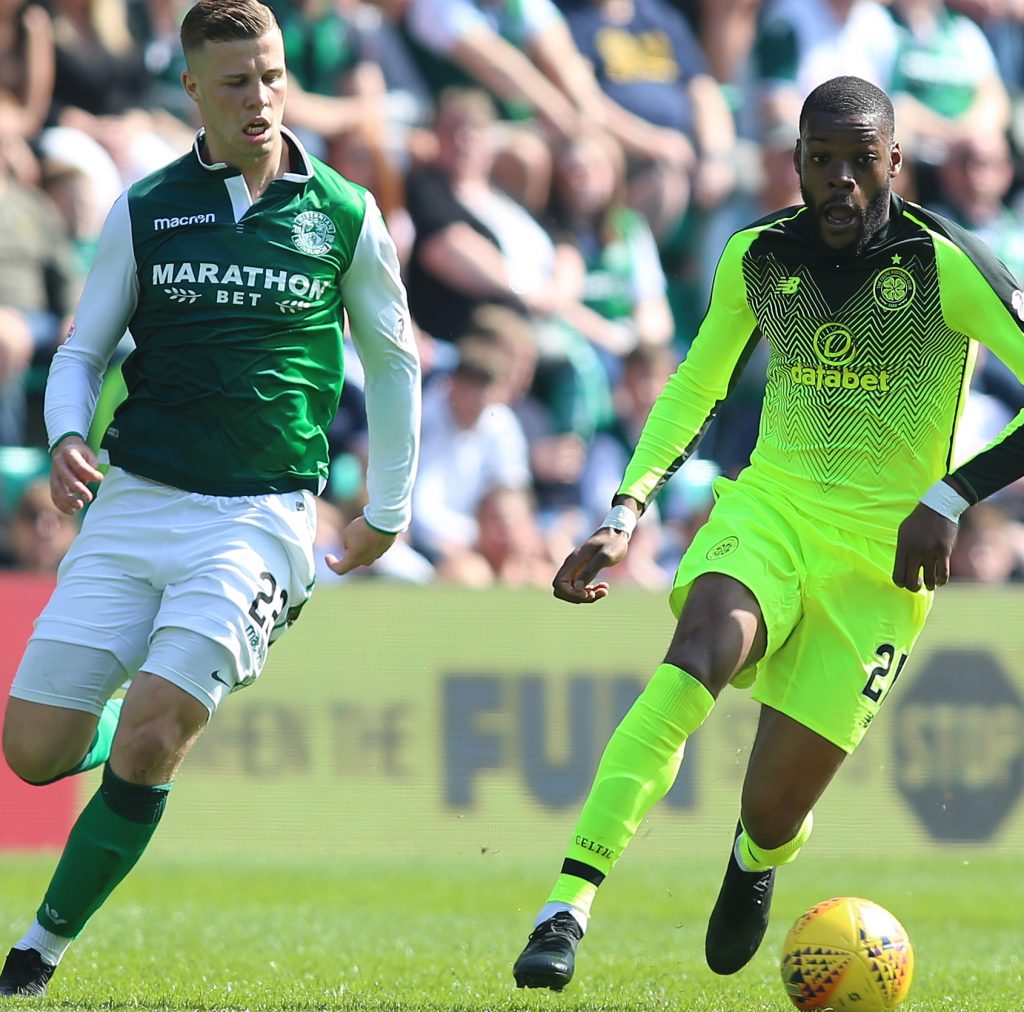 ON THE RUN…Olivier Ntcham gets away from Florian Kamberi.

The home side started in whirlwind fashion to such an extent it took Celtic 26 minutes to get a shot on target.

Paul Heckingbottom’s men looked determined to get revenge for the Scottish Cup quarter-final defeat last month as they launched themselves at the Hoops rearguard right from the off.

In the second minute, Daryl Horgan stormed forward from midfield to unleash a low sizzler from 25 yards which was blocked by Scott Bain who then dived on the rebound before the Edinburgh side could take advantage.

Within a minute, the same player eased away from Emilio Izaguirre, who seemed to be unaware of the danger, before firing over a right-wing cross that swept across the box without a taker. 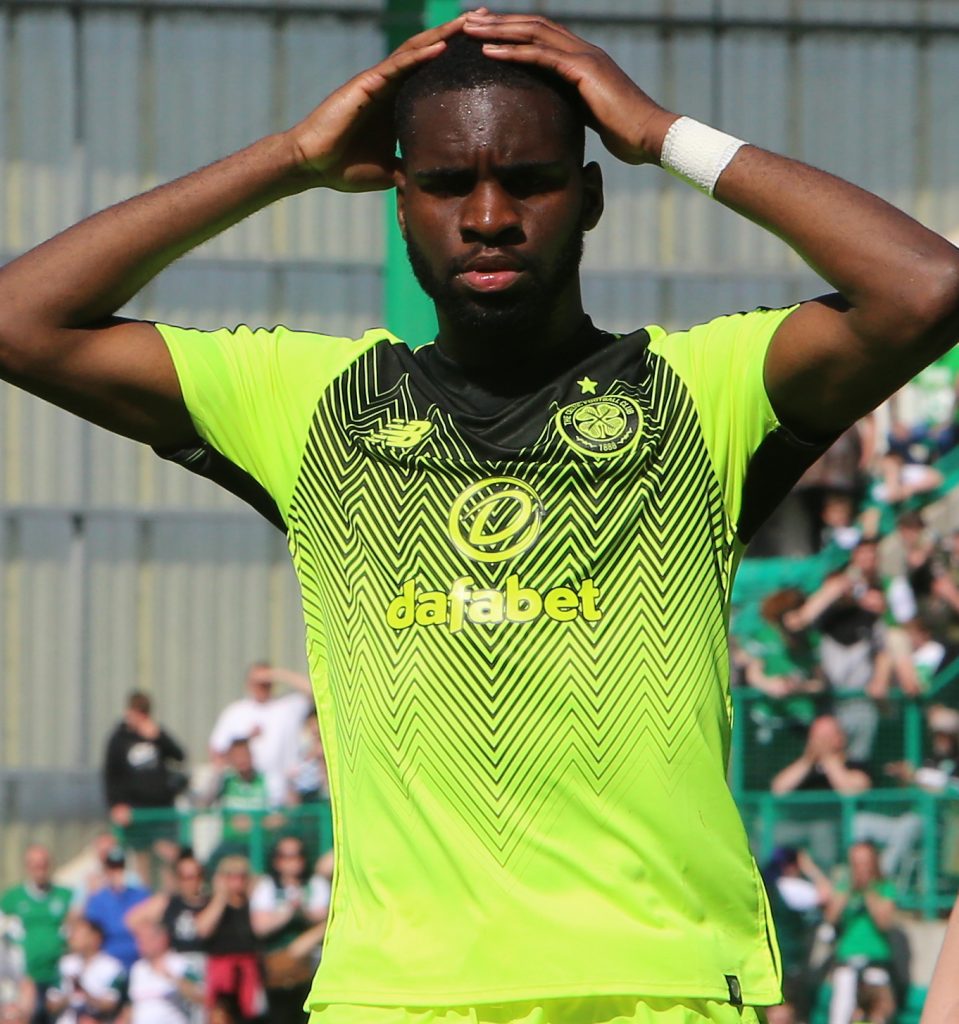 OH, NO…Odsonne Edouard looks frustrated after another save from Ofir Marciano.

In the sixth minute, Ntcham, who looked way off the pace while his range of passing was more than just a little awry, presented possession to Hibs and Stephane Omeonga tried to capitalise as he thrust into a good shooting position just outside the box.

The on-loan Genoa player thumped in a vicious low drive which brought a superb diving save from Bain as he got down at his right-hand post to divert the danger.

It took the champions until the 10th minute before they put anything together when Mikael Lustig set up Forrest to cross first-time from the right.

Edouard took the ball on his chest, but screwed his right-foot effort wide of the left-hand post.

Moves were breaking down too often at Ntcham as he toiled to make an impact, but, remarkably, he had the Hoops’ best opportunity to break the deadlock in the 26th minute.

Hayes swung over a left-wing cross that cleared the box, but found Lustig on the right. The Swede cut it back for the Frenchman on the edge of the box and his first-time right-foot drive was arrowing into the roof of the net until keeper Marciano took off on an athletic leap to his right to touch the ball over the bar. 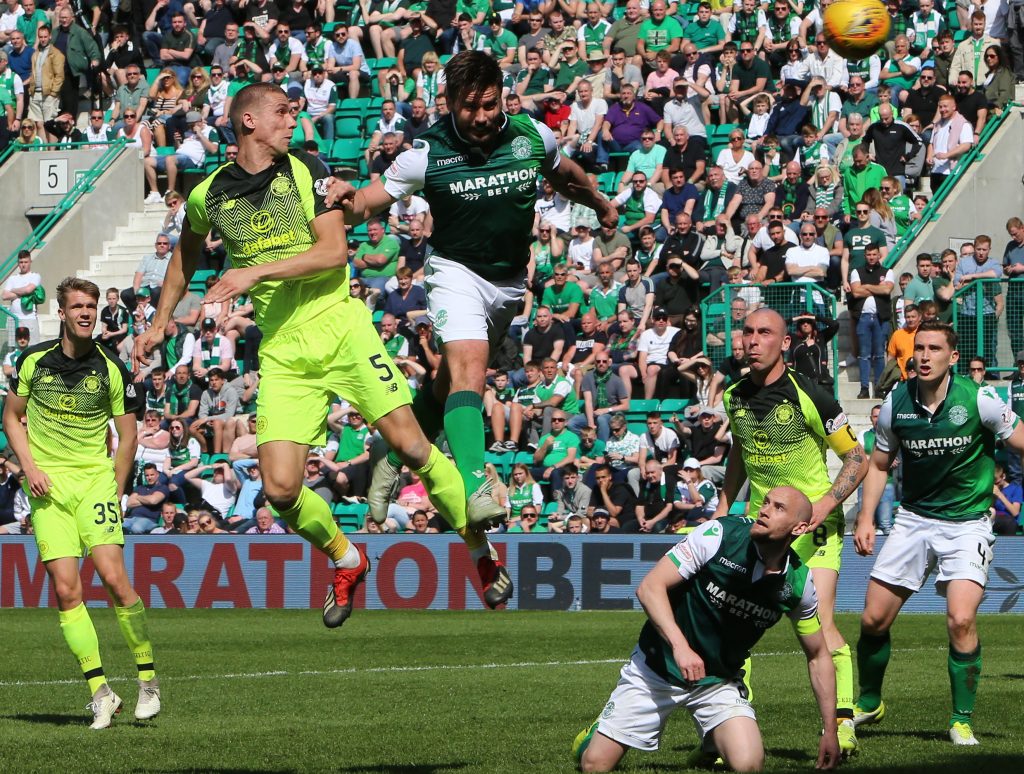 HEADS YOU LOSE…Jozo Simunovic gets up to thump in a late effort that was saved by Ofir Marciano.

Celtic were now taking over after removing the sting out of Hibs’ earlier fury, but the passing remained fairly sloppy and good moves continually hit a brick wall with a wayward final ball.

Scott Brown rarely ventured anywhere without his shadow Omeonga who had been clearly delegated to keep the Celtic skipper company for the entire game.

However, it did not stop the champions’ onfield leader from putting in a Man of the Match performance although some of his colleagues just did not respond on this occasion.

On the hour mark, Hayes had a shot blocked by Lewis Stevenson and the ball broke to Ntcham, but his return matched his performance and was well wide of the target.

Two minutes later, he was taken off to be replaced by Rogic who brought a bit of life to the midfield.

Three minutes later, Marciano denied Edouard with a blinding save from a 20-yard free-kick that was raging into the corner of the net until he pushed the ball for a corner-kick.

Sinclair was then thrown on for the hard-working Hayes who just could not provide a decisive while his deadball efforts rarely created menace.

Five minutes from the end, Weah came on for the toiling Forrest and the American came so close to setting up the decisive goal in stoppage time when he prodded the ball in front of the unmarked Edouard, 12 yards out.

The Frenchman hit a vicious effort at goal, but Marciano threw up a hand to divert the angled shot to safety. 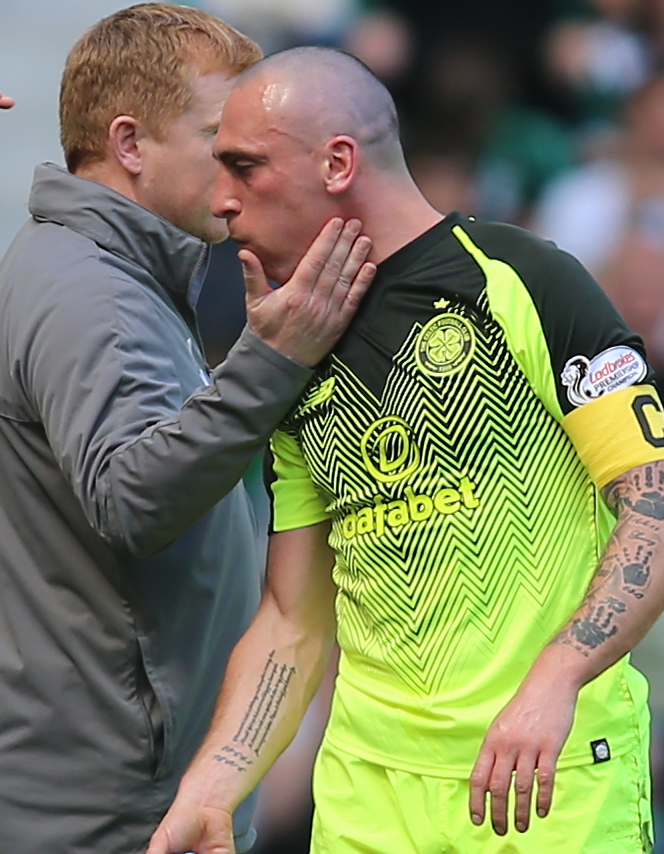 CONSOLATION…Scott Brown and manager Neil Lennon at the end of the goalless encounter.

Moments later, the keeper performed miracles again when he dived to his right to punch away a header from Jozo Simunovic from a right-wing McGregor corner-kick.

There had been an earlier scare for Celtic in the 86th minute when the defence failed to clear a left-wing cross and Oli Shaw was given the opportunity to stab the ball goalwards from six yards.

The alert Bain managed to block the effort and dive on the rebound to prevent any damage.

So, the champagne will remain on ice, but all good things are worth waiting for, as we all know.