CELTIC’S Premiership pain continues in the capital as they threw away two points against fired-up Hibs at Easter Road this afternoon.

They have now won a miserly twice on nine league visits and they will be kicking themselves over this latest setback.

Things got a bit frantic in the fading moments as Neil Lennon’s men stormed forward and if it had been a game of rugby instead of football they would have won by the length of Princes Street.

Ryan Christie, Jonny Hayes, Scott Brown and Vakoun Issouf Bayo all blasted over the crossbar when a little bit of compose at the crucial moment would have produced a greater reward.

Lennon will point with a strong degree of validity of the champions being robbed of a certain penalty-kick in the 64th minute when Ryan Christie was scythed down by Lewis Stevenson when he attempted to get a cross over from the right-side goal-line.

Referee Kevin Clancy waved play on and he will not want to see the TV pictures that prove the Hibs man made contact with the Celt’s ankle to send him toppling to the turf. 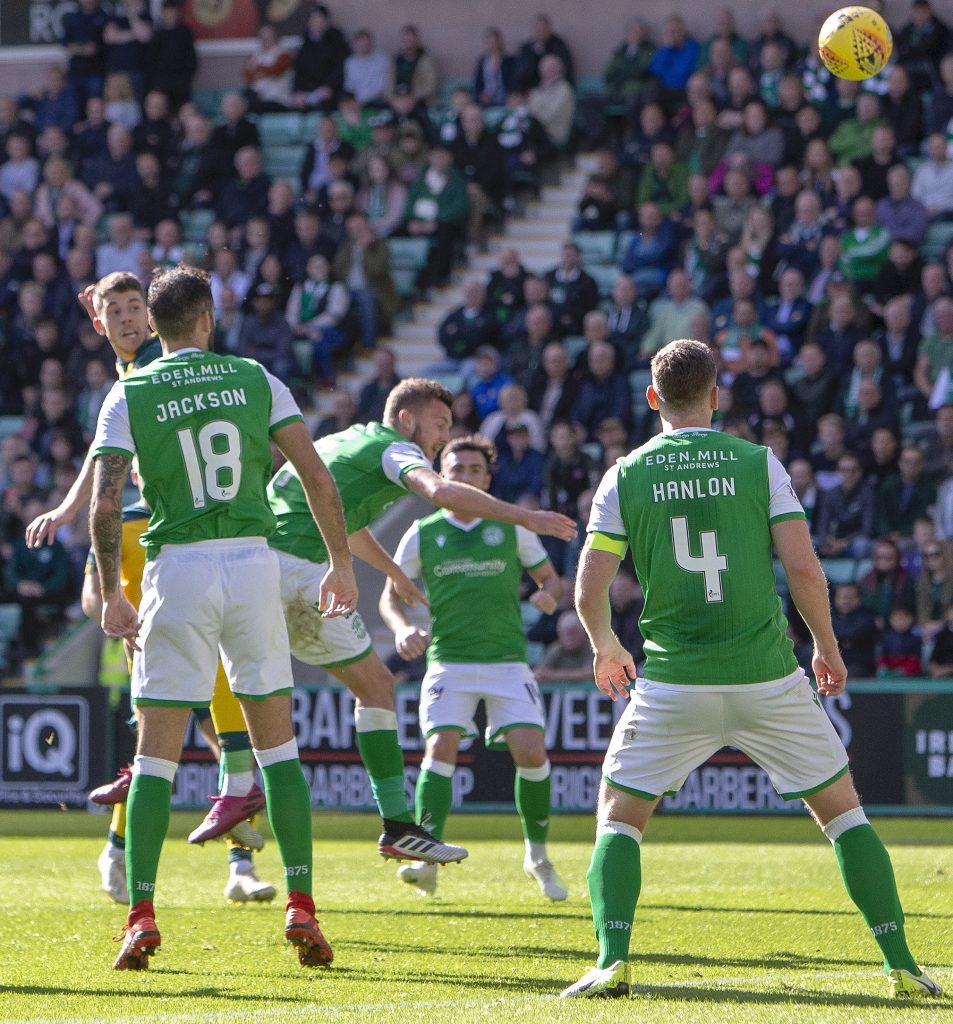 RISE AND SHINE…Ryan Christie outjumps a posse of Hibs defenders to thump in Celtic’s equaliser. 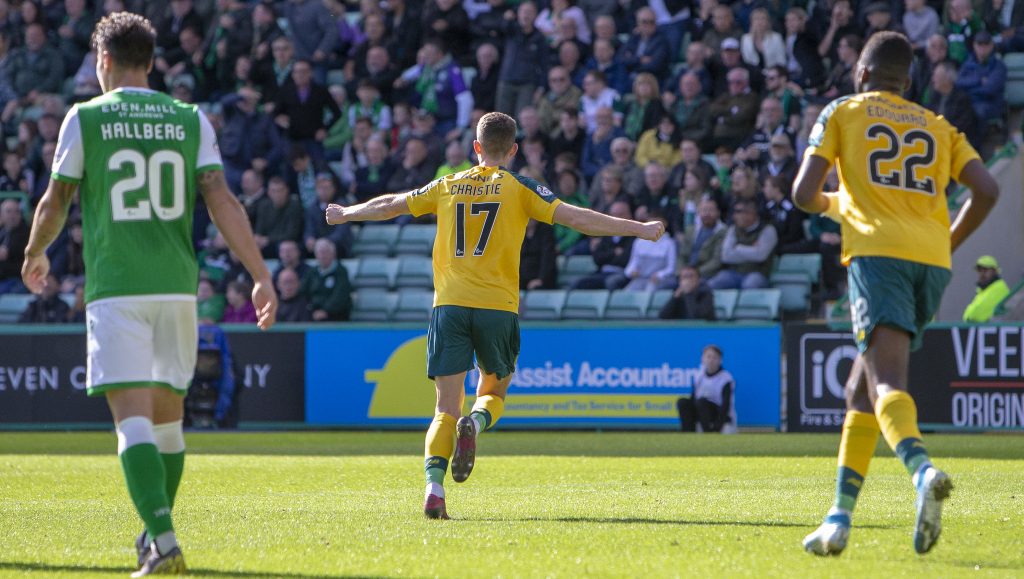 RUNAWAY SUCCESS…Christie takes a bow in front of the fans with Odsonne Edouard about to join in.

It was a clear spot-kick, but the match official wasn’t interested. It was a calamity from Clancy and he repeated the feat later on when a rash tackle by Daryl Horgan on Mortiz Bauer sent the Austrian flying inside the box. Penalty-kick? Once more the screen test proved conclusively it was a stick-on, but the whistler turned another blind eye and the visitors can feel more than a little aggrieved.

Maybe it was written in the stars that Celtic would stumble at their bogey ground. Naturally, Lennon came looking for a win and he underlined his feelings as he threw on three substitutes to keep the pressure on a side who belied their lowly position in the league before this game. They threw themselves into tackles right from the off and won an alarming amount of 50/50 challenges.

Astonishingly, Lennon’s men gifted the opposition the lead for the SEVENTH time this season with Hibs following on from Kilmarnock last week, Motherwell in the second league game and Cluj (twice), FK Sarajevo and Rennes in European competition.

Kristoffer Ajer was the culprit with a dreadful own goal in the seventh minute and the Norwegian has to hold his hands up and accept responsibility.

He was slow to react when ex-Celt Scott Allan threaded a pass through to Christian Doidge on the right. There was no immediate danger and the forward tried to clip the ball across the face of goal. 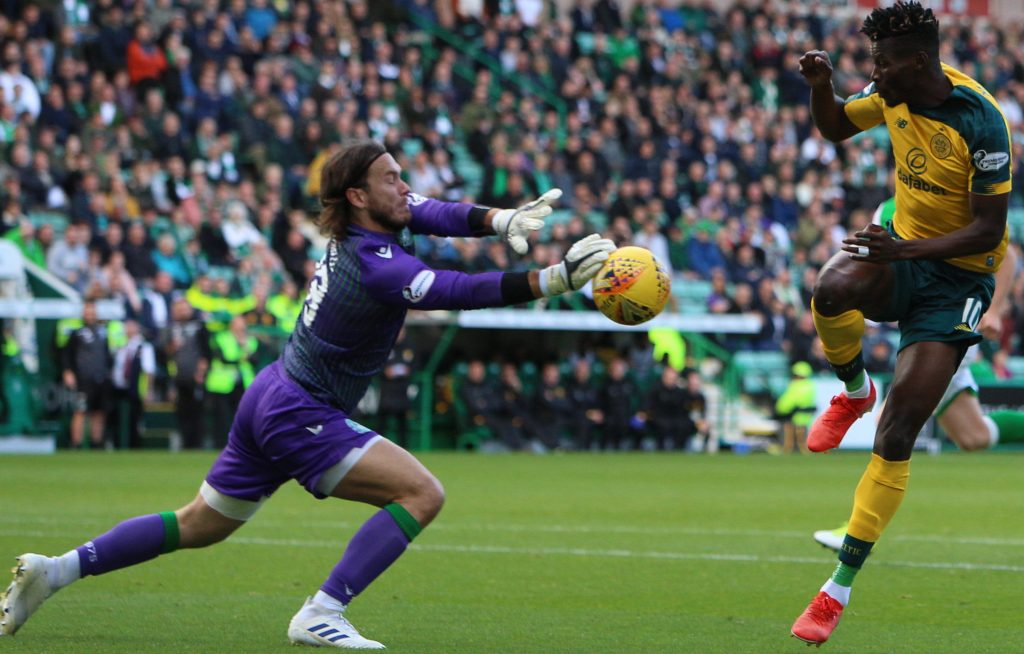 YOU NEED HANDS…Chris Maxwell races from his goal to clear the ball from Celtic substitute Vakoun Issouf Bayo.

Remarkably, the Norwegian took his eye off the action for a split-second and wasn’t concentrating as the ball took a touch off his right leg and ricocheted past the scrambling Fraser Forster at his neat post. It was harsh punishment for Ajer, but he is going to have to learn fast in a back-four position where errors are normally so costly.

So, very quickly the Hoops were asked to respond again and, despite some aggressive closing-down play from their opponents, they did that.

In the 10th minute, there was some clever interchanging between Christie and Olivier Ntcham to set Odsonne Edouard striding in from the right at an angle, but keeper Chris Maxwell managed to block his shot at his left-hand post.

And nine minutes later, the home custodian was in action at his opposite corner as he beat away a drive from James Forrest, who looked lively on the left.

In the 23rd minute, Hibs boss Paul Heckingbottom was fuming when referee Clancy pulled play back after Forrest had been tripped by Tom James. The ref had allowed the game to continue, but fourth official Nick Walsh, with a better view, alerted him to the fact there had been a foul.

A minute later, the home gaffer blew a fuse when Celtic equalised. It was a superb manoeuvre done at speed as Ntcham released the rampaging Bauer on the right. The full-back pitched over an inviting cross and Christie rose supremely from 10 yards, outjumping friend and foe, to send a header swirling high past the the acrobatic Maxwell at his right-hand corner of the net. 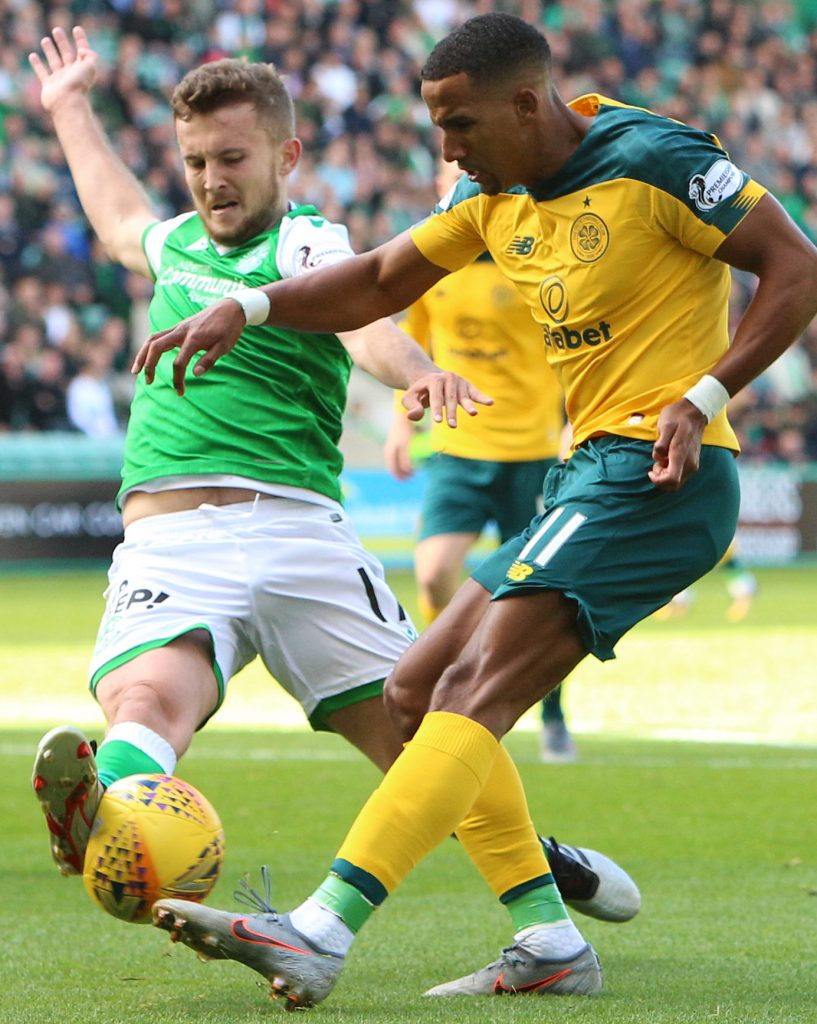 BY THE LEFT…substitute Scott Sinclair fires over a cross in the fading moments.

Heckingbottom reacted furiously as he booted a plastic bottle of water and it struck the assistant official. It was unfortunate, but ref Clancy reacted swiftly by producing the red card and sending the hot-headed coach to the stand.

Celtic began lively in the second-half and a ferocious Forrest volley was diverted for a corner-kick, but, following a 10-minute hiatus where Celtic lost their rhythm, Lennon replaced Ntcham with Jonny Hayes on the hour mark and put Forrest to the right and Christie into his best role behind the frontman.

Four minutes later, the champions were denied a stonewall penalty-kick when Christie was sent crashing by Stevenson and they continued to pile forward looking for that elusive second goal.

In the 66th minute, towering centre-half Jullien contrived to miss with a six-yard header after being picked out by a delicious left-wing free-kick by Christie. The Frenchman’s direction was wayward and Hibs breathed a sigh of relief as his effort flew far too high.

Six minutes later, Edouard, with little gong right on this occasion, was withdrawn and the more direct Vakoun Issouf Bayo came on to add a bit more direct power.  Near the end, the Ivorian twisted and turned to make space inside the box and, after doing the hard work so well, he took a rush of blood to the head a walloped the ball into the crowd.

Scott Sinclair was introduced for Forrest in the 84th minute to bring fresh impetus to the attack on the left and he produced a couple of moments of danger, but a packed defence repelled the threats.

The required strike did not arrive and the proud 100 per cent Premiershp record fell at the seventh hurdle.

Talking off falling, Hoops reject Allan seemed to spend more time on the ground than on his feet in this encounter. He managed to get former team-nate Brown booked when the skipper merely touched him and the Hibs player took another four strides before toppling to the turf. Clancy bought it and produced a yellow card.

Allan spent the entire game looking as though he would roll over if an undernourished moth landed on his shoulder. He didn’t learn that stuff at Celtic, that’s for sure.

Clancy will have better games, hopefully, and he booked another four Celtic players – Ntcham, Ajer, McGregor and Bauer – and three from the home side – Josh Vela, Stevenson and Allan.

It was feisty and fiery throughout, but it was yet another encounter in the capital where Celtic lacked that little finesse to unlock the back door and get their deserved rewards.