Celtic Quick News on News Now
You are at:Home»Latest News»‘I HAVE TO TAKE MY HAT OFF TO ANGE,’ BROONY HAILS HOOPS BOSS
By CQN Magazine on 7th May 2022 Latest News

SCOTT BROWN admits he is “delighted” Celtic are on the brink of winning the title after last season’s catastrophic campaign.

Ange Postecoglou’s side go into the High Noon encounter with Hearts at Parkhead today in the knowledge a win will propel them nine points ahead with only two games to play.

Even an odd-goal victory over the Edinburgh outfit would give the Hoops a superior goal difference of TWENTY over Giovanni van Bronckhorst’s club who face Dundee United in Glasgow tomorrow afternoon.

If the Govan side fail to win, the championship will be heading back to the east end of the city for the tenth time in 11 years. 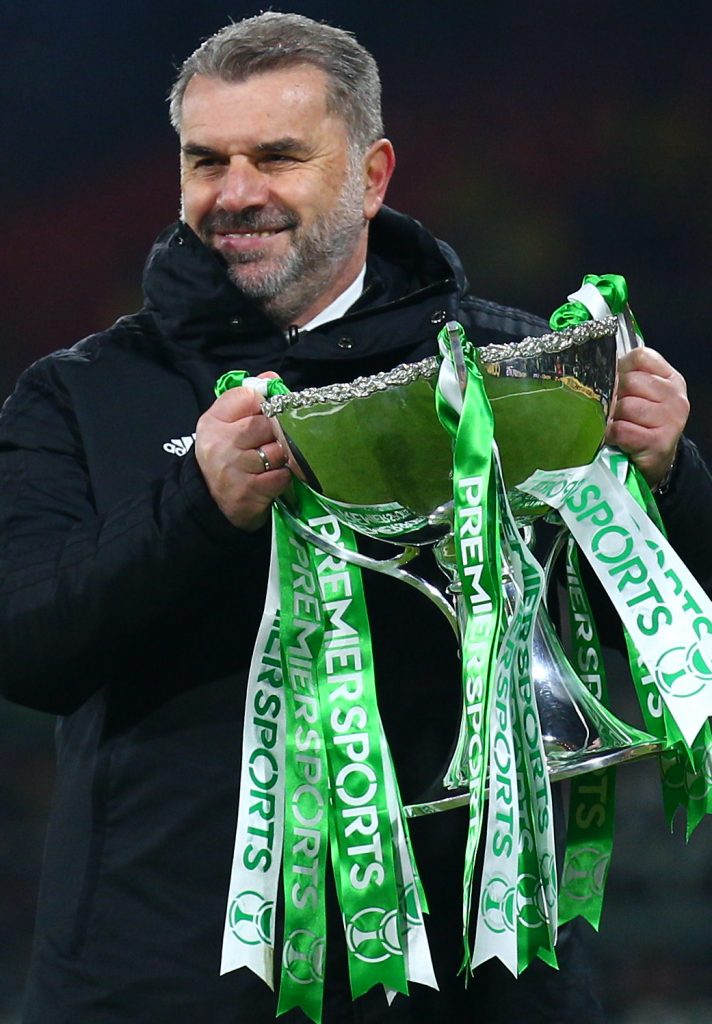 PRIZE GUY POSTECOGLOU…the Celtic manager proudly holds his first piece of silverware, the Premier Sports League Cup which was was won with a 2-1 victory over Hibs at Hampden in December.

Even if the nearest challengers pick up all three points, it would still take a collapse of cataclysmic proportions for Ange’s men not to lift the crown with a match at Tannadice on Wednesday before the curtain comes down on an extraordinary campaign in Paradise with the visit of Motherwell a week today.

Thirty-six-year-old Brown, who left the Hoops for an ill-fated nine-month spell at Aberdeen, has just announced his retirement from playing, as CQN reported earlier today.

The club icon, winner of TEN championships during his glittering 14-year career at Parkhead, admitted: “Obviously, I will cherish some amazing moments from my time and none better than winning so many trophies during my years at Celtic.

“So, I’m delighted that the club is now about to celebrate winning the title back.

“It was always an honour for me going out there as captain, knowing the lads were listening to you in that huddle, with 50,000 fans behind us wanting us to do our best.” 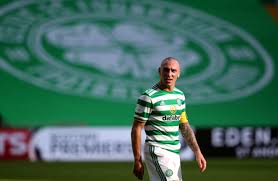 PARADISE…Scott Brown patrols his midfield beat during his 14 years as a Celtic player.

“So, I’ll just have to take that one on the chin. But you learn lessons from the tough times, too, and I think everyone at the club took those lessons on board.

“I know how it feels to lift that trophy and how much hard work is required to win it. So I have to take my hat off to Ange Postecoglou for the job he has done in such a short space of time.”

Brown added: “I hope the manager and the players savour every moment.

“They’ve responded by really kicking on this season and it’s been fantastic just to watch the way they’ve gone about it.

“The inverted full-backs, the high press, the energy levels – that’s the way I will want my teams to play the game when I’m a manager somewhere down the line.”

Brown has already been linked with hometown club Raith Rovers who are looking for a successor to John McGlynn who has just left to take over Falkirk.