CELTIC’S marathon man Callum McGregor can’t wait to clock up his FORTY-THIRD game of the season when the holders take on Partick Thistle in the Scottish Cup at Firhill a week tonight.

The midfielder has made more appearances than any other footballer in the world and, including six outings with the Scotland international side, has already clocked up a remarkable total of 3,714 minutes in this campaign.

However, the 26-year-old anchorman responded to comments he must be feeling the strain after three-and-a-half-years of almost non-stop action that has seen the Parkhead side claim 10 successive domestic honours.

McGregor, speaking to the Daily Record, insisted: “No, I haven’t felt jaded.

“People ask me that question, but I actually feel as fit as I’ve ever felt. I’m in a good place both physically and mentally. It can be over-played a little bit.

“I feel fortunate in the position I play because my high intensity isn’t too high.

“I flip in and out of different positions, but I tend to play in a role where my game is all about moving the ball. I don’t do as much running as the forward players, wingers or full-backs.

“For them, it’s high intensity for probably 900 metres a game and then do it again three days later, so I’m maybe fortunate my game isn’t built around that. 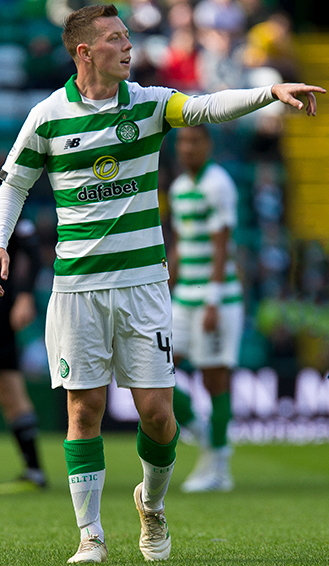 “I have got a lot of experience now, but I’m also still at a good age where I can play all the games. I love playing football, so as long as I’m fit I’ll be available. It’s then up to the manager whether he plays you or takes you out of the team for a rest.”

McGregor added: “When I didn’t play against Cluj, I felt the benefit in the next game against Hibs. I felt I had a wee bounce in my step again having had that four days off. It probably saw me through December.

“If you want to be a top player and be considered in that bracket and get as close to those guys as possible then you have to be available every week.

“It’s also about you living your life properly away from the club.”

McGregor and Scott Brown have become the rock in the champions’ line-up and are first picks in Neil Lennon’s team.

The Hoops duo, along with their team-mates, have trained well at the team’s warm-weather HQ in Dubai for the past week and are raring to go for the second part of the campaign.

There’s a quadruple treble to be won and McGregor has set his sights on make even more history at his boyhood favourites.