Celtic Quick News on News Now
You are at:Home»Latest News»‘IF WE RELAX EVEN A LITTLE BIT IT CAN KICK US IN THE FACE,’ BENKOVIC
By CQN Magazine on 10th November 2018 Latest News

FILIP BENKOVIC has warned Celtic they could be “kicked in the face” if they drop from the standards that saw them overcome RB Leipzig 2-1 in the dramatic Europa League Group B encounter at Parkhead on Thursday night.

The on-loan Croatian defender has also urged his team-mates to continue to display the same verve and fire when they take on Livingston in West Lothian in the High Noon shoot-out tomorrow.

Depending on what happens this afternoon in the Hearts v Kilmarnock meeting at Rugby Park, the champions could go back to the top of the Premiership this weekend.

Benkovic, who is expected to sit out the match against Gary Holt’s outfit because of the artificial pitch, has played his part in the Hoops’ recent surge that has seen them score TWENTY-THREE goals and concede only two in their past five domestic games.

He said: “We must forget about the surface and go for the win. I want to play on Sunday because it’s very important for young players to play, but it will be the coach’s decision.

“I had a problem before I played on Kilmarnock’s pitch, so we’ll see what happens – we’ll speak about this at training. We all work hard every day and we all support whoever is chosen to play.

“But it’s not really important where we play. If we played them in the street behind the stadium we MUST play in the same way we did against Leipzig because if we relax even a little bit it can kick us in the face.

“So, we must play really aggressively and believe that we can win. In football you have good times and bad times and our recent performances have been very good. We have played really well and we hope that we can keep that going this weekend.” 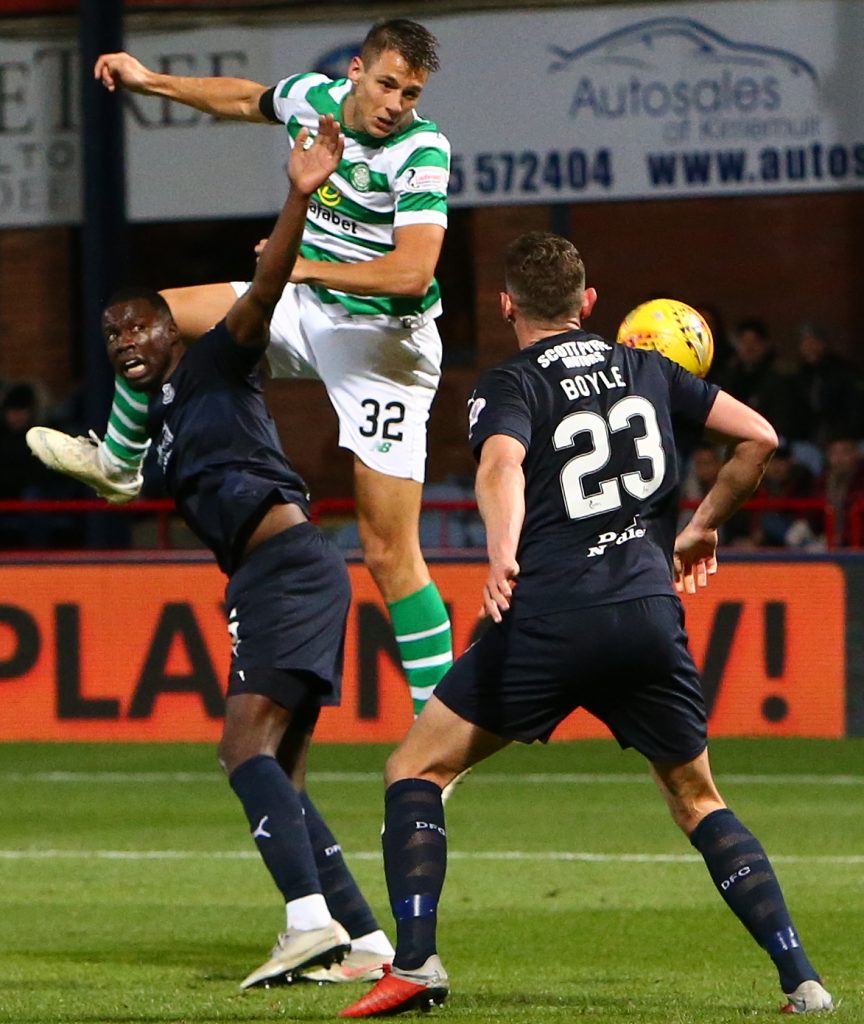 UP AND AT ‘EM…Filip Benkovic rises and shines in the recent 5-0 win at Dundee. Pic: Geo.

Brendan Rodgers faces the threat of the impressive central defender being recalled by parent club Leicester City in January. They paid £13million for the 21-year-old ball-playing stopper in the summer in the expectation of Harry Maguire moving on with Manchester United the likely destination for the England World Cup centre-back.

The deal didn’t materialise and the Hoops gaffer snapped up Benkovic on an initial season-long transfer, but he could be on his way back to the King Power Stadium if Maguire is sold in the January window.

It is a frustrating situation for the Irishman, especially with the cultured back-four operator settling in to a solid partnership with Dedryck Boyata.

The former Dinamo Zagreb star said: “It is down to the coach who plays. We all train hard and everyone wants to play. But I do think that Dedryck and I understand each other very well on the pitch. That can get better if we play some more together, but it is the coach who picks the team.

“Since I have come to this club what I see is that every player gives everything not just on the pitch, but on the training ground, too. And so everyone wants to play.

“I feel like I have already learned a lot from Dedryck and he is a very important player for the team because he has so much experience. I just have to keep working hard and give everything to be in the team. For now, everything is going very well.

“While I am here I will give everything because these supporters deserve that at the very least.”