ODSONNE EDOUARD has promised Celtic fans he will do his best to fill in for his compatriot Moussa Dembele.

Brendan Rodgers’ side will again be without the French powerhouse for the Champions League third round qualifiers against AEK Athens.

Dembele has been sidelined since limping off with a hamstring injury after netting two against Alashkert in the 3-0 second leg win in Glasgow last month.

He missed the games against Rosenborg and he will be forced to sit out tomorrow’s encounter against the Greek title-winners and the return at the Olympic Stadium a week tonight.

But £9million man Edouard, the club’s record signing from Paris Saint-Germain in the summer, has vowed to step up and fire the Hoops towards a play-off place against Sweden’s Malmo or Vidi, of Hungary. 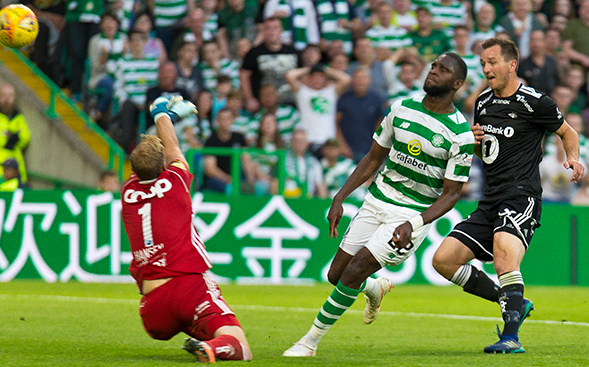 FIRST CLASS…Odsonne Edouard lobs in his second and Celtic’s crucial third goal in the 3-1 triumph over Rosenborg at Parkhead last month.

He said: “AEK Athens is a difficult tie for us. Obviously, they are a very good side and it will help us that we have now played out first Premiership game against Livingston.

“I think we’re improving every time we play. Our rhythm is better with each performance.

“Of course, it’s a pity Moussa is out injured and will miss the ties against Athens. I just want to keep doing what I am doing and I don’t feel pressure of additional responsibility.

“Hopefully, I can play well and the goals will keep coming.”

Edouard scored Celtic’s first competitive goal of the campaign in the 3-0 first leg win in Armenia and he grabbed a double in the 3-1 triumph over Rosenborg in Glasgow a fortnight ago.

Those goals were good enough to push Rodgers’ men into the ties against AEK Athens after last week’s goalless draw in Trondheim.

And the 20-year-old attacker got off the mark in the league, too, with the second goal in the 3-1 victory over Premiership newcomers Livi at the weekend.