BRENDAN RODGERS will not be rushed into making a decision on French striker Odsonne Edouard, who is on loan from Paris Saint Germain until the end of the season.

The Celtic boss admitted he has been impressed by the youngster’s progress during the first half of the campaign.

Rodgers has first option on a permanent deal, but will use the next few months to decide if the 19-year-old frontman is worth an investment of around the £7million mark.

The Hoops gaffer said: “I will assess it at the end of the season. He has grown each week he has been with us.

“It’s for both sides, as well. He might love it with us, he might not. I know he is really enjoying it, but there is no rush to commit on either side now.

“It’s just a case of seeing how it goes in the second half of the season and we’ll review it then.”

Edouard has scored four goals and is competition for Moussa Dembele and Leigh Griffiths.

Rodgers said: “He is getting better and better each week. The boy has big talent and is a real worker. He’s the type of performer I like. 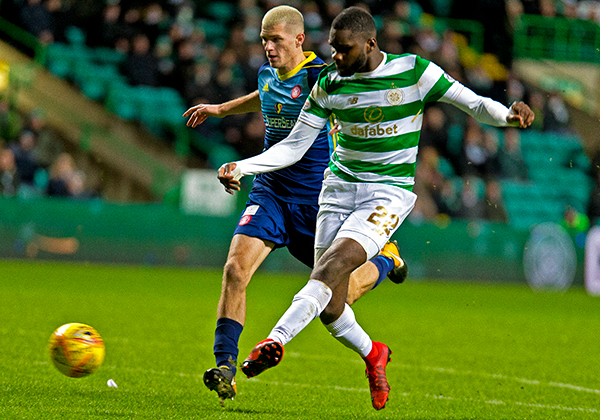 “His English is getting better through lessons and he’s still only very young at 19, so he has a lot of potential.

“I don’t have any qualms if I have to put him into a game.”

Rodgers believes having the third striker has been beneficial and added: “It’s not easy to make it work, but you can as long as you give clarity to the players in terms of where they are at.

“They can only play so many games.

“We had a situation last year where we only had two strikers.

“It’s a tough balancing act. I don’t think you can bring a third striker who is an experienced player.

“You are looking for a young talent with big potential who knows where he sits in the hierarchy, but is always ready.

“By virtue of that, it has kept Moussa and Leigh fitter than they were last year.”