CELTIC maintained their 100 per cent record against Aberdeen in Cup confrontations at Hampden over the past three seasons with their thrilling 3-0 victory yesterday.

The Dons made positives noises before the Scottish Cup semi-final with both teams battling for a place in the Final against Hearts at the national stadium on May 25.

However, the talking had to stop at the kick-off and that’s when the trophy holders were the big noises with a solid victory, goals coming from James Forrest, Odsonne Edouard and Tom Rogic. The crestfallen Pittodrie outfit finished the tie with nine men following the dismissals of Dom Ball and Lewis Ferguson while manager Derek McInnes and his assistant Tony Docherty were both banished to the stand.

It didn’t go according to plan, either, in season 2016/17 when the men from the north east travelled to Glasgow’s south side for two silverware showdowns.

In the League Cup Final, the Hoops triumphed by three clear goals with two of yesterday’s goalscorers on the mark – Rogic and Forrest – with Moussa Dembele rolling in the third from the penalty spot.

And Rogic did it again with the dramatic late Scottish Cup winner in the 2-1 triumph in May 2017. Jonny Hayes, now a Hoops team-mate, gave the Dons an early lead, but Stuart Armstrong provided a quickfire equaliser before the Wizard of Oz had the Final say.

And in December last year, Ryan Christie took the scoring spotlight with a brilliant volley for the League Cup clincher.

The Dons had that old familiar sinking feeling again at Hampden on this most recent occasion when they came up against a Celtic team in a rampant and ruthless mood.

CQN‘s ace lensmen were there to capture the action. Here is the pick of the pics. 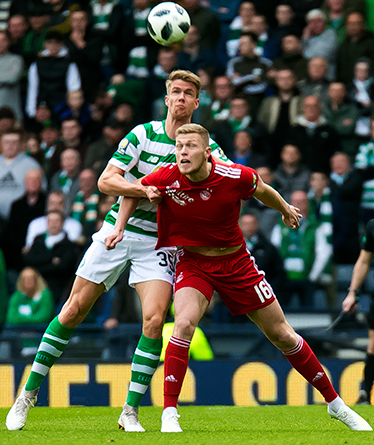 EYES ON THE BALL…Kristoffer Ajer tussles with Sam Cosgrove. 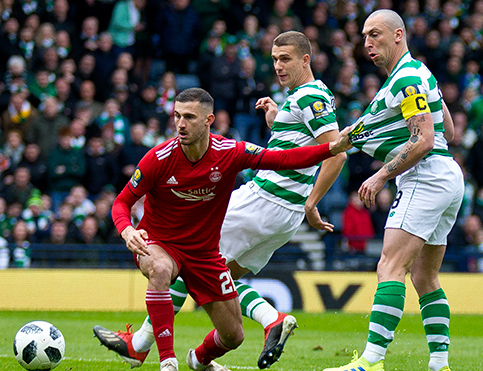 GETTING SHIRTY…Dom Ball gets a hold of Scott Brown’s jersey as Jozo Simunovic sweeps a shot wide. 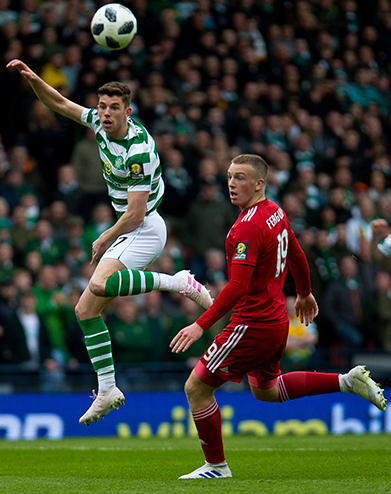 UP AND AT ‘EM…Ryan Christie strikes a ballet pose as Lewis Ferguson looks on. 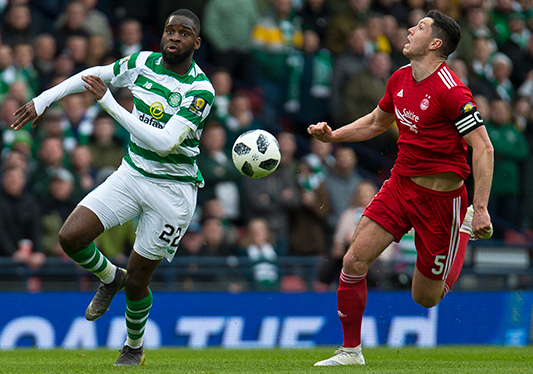 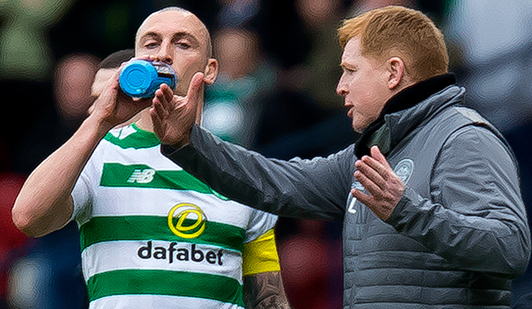 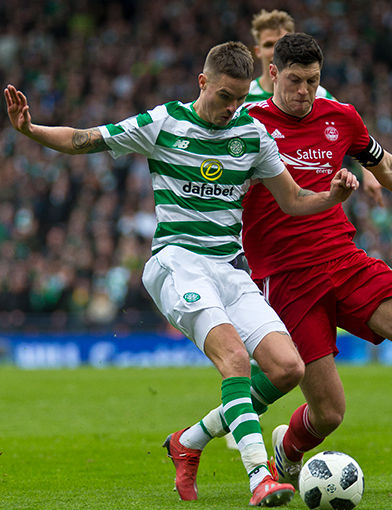 MY BALL…Mikael Lustig and Scott McKenna in a duel for possession. 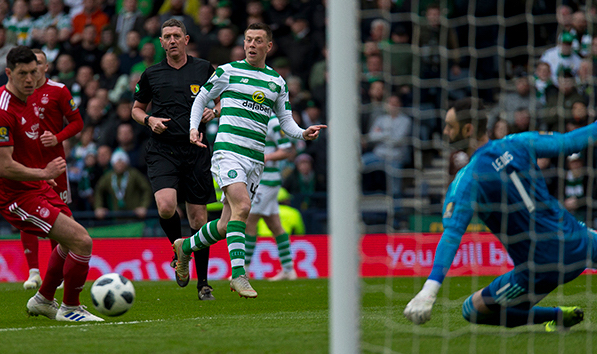 SO CLOSE…Dons keeper Joe Lewis and his defence escape as Callum McGregor piles on the pressure. 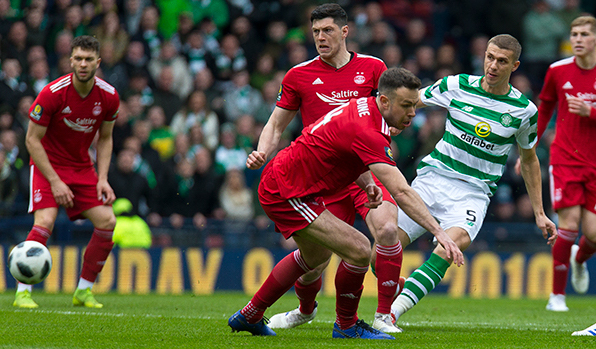 WALLOP…Jozo Simunovic has an attempt at goal that was well saved by Joe Lewis. 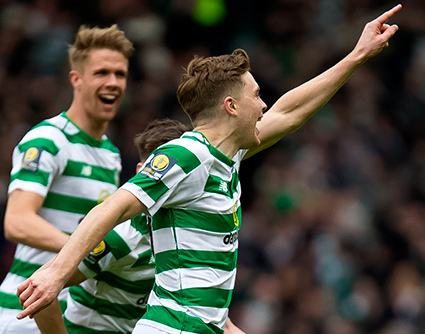 HANDS UP IF YOU’VE SCORED…James Forrest races away after the opener with Kristoffer Ajer sharing the elation. 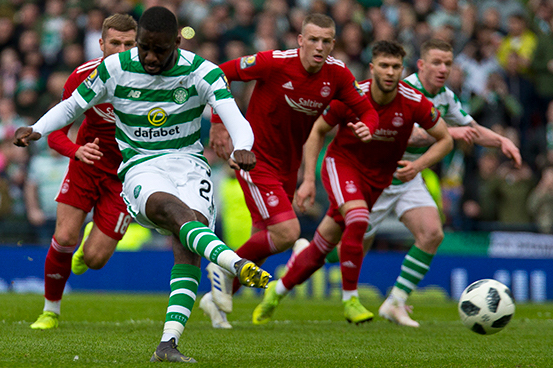 NICE’N’EASY DOES IT…Odsonne Edouard strokes home the second goal via the penalty spot. 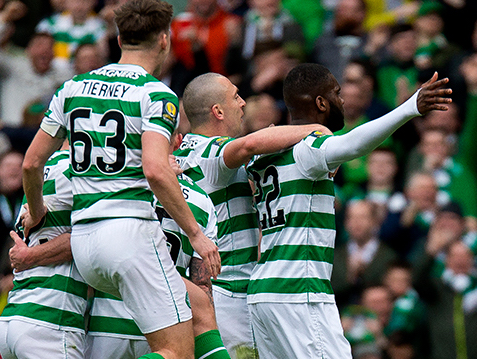 TAKE A BOW…Odsonne Edouard is congratulated by skipper Scott Brown after his strike. 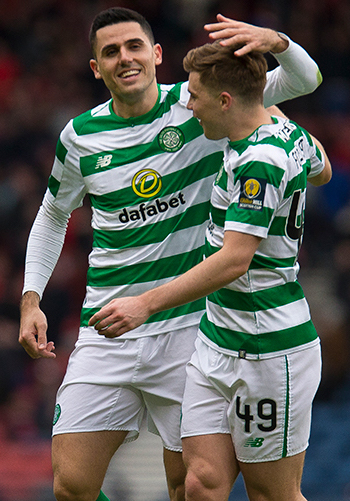 WIZARD OF OZ…Tom Rogic and James Forrest share the happiness after the third goal from the Aussie. 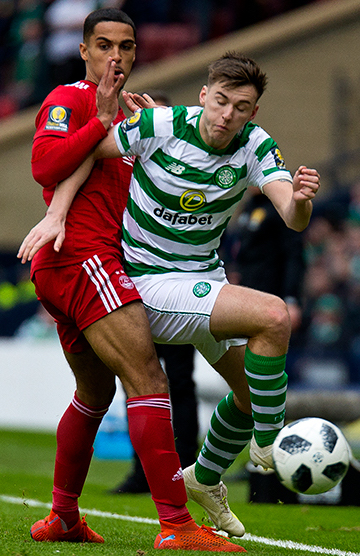 ON THE RUN…Kieran Tierney storms past Dons defender Max Lowe. 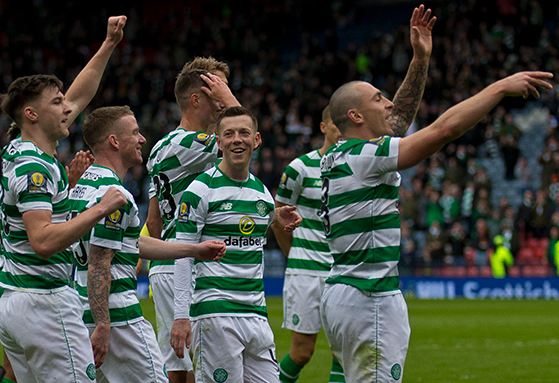 CHEERS…Scott Brown leads the parade after the Hoops cemented a place in the Scottish Cup Final against Hearts on May 25. Following the leader are Kieran Tierney, Jonny Hayes, Kristoffer Ajer, Callum McGregor and Jozo Simunovic.