Celtic Quick News on News Now
You are at:Home»Latest News»‘IT MAY NOT HAVE BEEN IDEAL TO LEAVE,’ REFLECTS RODGERS
By CQN Magazine on 6th April 2021 Latest News

BRENDAN RODGERS admits he understands why Celtic fans were so disappointed when he walked out on the club in February 2019.

The Hoops supporters were stunned with the announcement their manager was quitting to take over at Leicester City – just 24 hours before a crucial Premiership game against Hearts in Edinburgh.

However, Rodgers insists his decision to leave with the club on the brink of the historic treble treble was actually BENEFICIAL for both parties.

As well as the game at Tynecastle, the club also had a Saturday night date at Easter Road where they were due to face Hibs in the quarter-final of the Scottish Cup.

Rodgers had swept to seven successive trophies since replacing Ronny Deila in May 2016 and the Hoops followers were convinced he would remain at the club all the way to the record-breaking 10 in a row.

Neil Lennon answered his old club’s SOS and managed to guide them to league and Cup successes. The Northern Irishman managed to stage an action replay with the addition of the Scottish Cup in December last year to seal the unprecedented quadruple treble before departing in February. 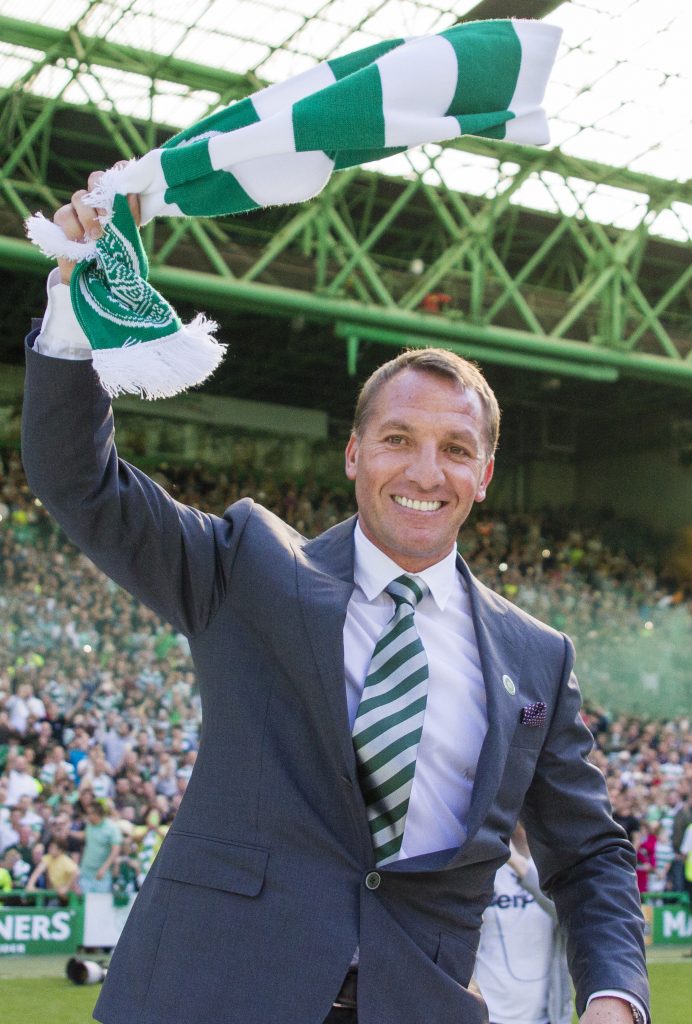 HAPPY DAZE…Brendan Rodgers is a scarf ace as he is introduced to the Celtic fans at Parkhead in May 2016.

Rodgers was adamant, though, that everything worked out well and said: “I understand that there will be a narrative around (the early exit). I’ve always made decisions I thought were right. Although I was a supporter of the club, this is also my profession.

“I felt at that time there was about, what, 10 games to go, we were eight points clear, we’d won the first trophy of the season which was the League Cup, we were in the quarter-finals of the Scottish Cup.

“My feeling was the team was in a good place. We’d created an environment and established a mindset in the years I was there. It may not have been ideal to leave and I can understand any grievance towards me going away because I know Celtic supporters and there’s not another club like it.

“How can you walk out on it? I can totally accept that.”

Rodgers, speaking on Robbie Fowler’s podcast, added: “I know in my heart that from the first day I walked in there I gave Celtic my life, I gave everything to Celtic.

“My ambition was to improve them on and off the pitch and when that moment came that I felt I couldn’t do that, yeah, I could’ve gone on to the end of the season, but there was an opportunity to go to Leicester, see the players here for the last 10 games and prepare for the following season.

“It actually worked out quite well if you look at it for both. Celtic did stay on course to win the treble and they won it by nine or 10 points when I left, and I was able to go into Leicester and pick up a good feel for the players and establish a culture here which would provide us a good base for the next season.

“But I totally understand it and will never be critical because I get why people would feel why shouldn’t I stay.

“My memory is more towards my time there and the joy I felt when I was there, which was amazing.”