The Irishman handed the 19-year-old his first-team opportunity this season and the youngster scored three goals in two successive games, one against Motherwell and two against Dundee in December.

Rodgers thought enough of Johnston’s attributes to start the last game of 2018 at Ibrox with the kid up front and Odsonne Edouard on the substitutes’ bench. The move backfired as Steven Gerrard’s outfit won 1-0 for their first triumph over the Hoops in 13 attempts.

Interim manager Neil Lennon has also liked what he has seen of the slightly-built forward’s qualities and gave him a starting place in the line-up that eventually overcame Dundee at Dens Park when Edouard netted the stoppage-time clincher.

Johnston struggled to make an impact on Tayside and was replaced with Jonny Hayes just before the hour mark against Jim McIntyre’s stubbon relegation-threatened outfit. 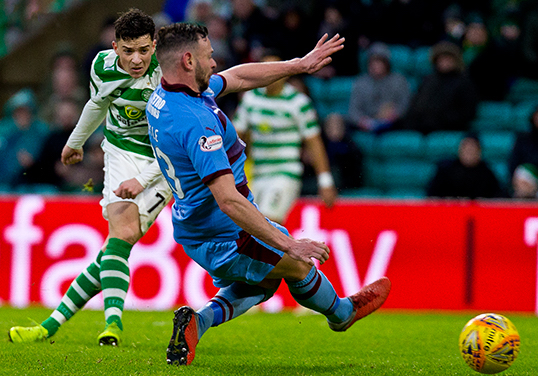 BY THE RIGHT…Mikey Johnston scores against Dundee.

Now the versatile winger is hoping to play his part when Gerrard brings his players to Parkhead on Sunday for an encounter that could see the champions go THIRTEEN points ahead in their quest for an eighth consecutive title.

Reflecting on recent events, Johnston, speaking to the Daily Record, said: “I don’t think anyone can deny Brendan was a good manager.

“It is part and parcel of football. It’s the first time I have experienced a manager leaving in my career.

“It was strange, but it’s something that happens. I liked Rodgers and it was weird for me to start with.

“However, the managerial transition has not made a lot of difference.

“Both managers have been great for myself and they both believe in me and have given me opportunities.

“Hopefully, I can repay them. This season has been a real learning curve. When you’re younger, you’re playing week in week out and your confidence is high. 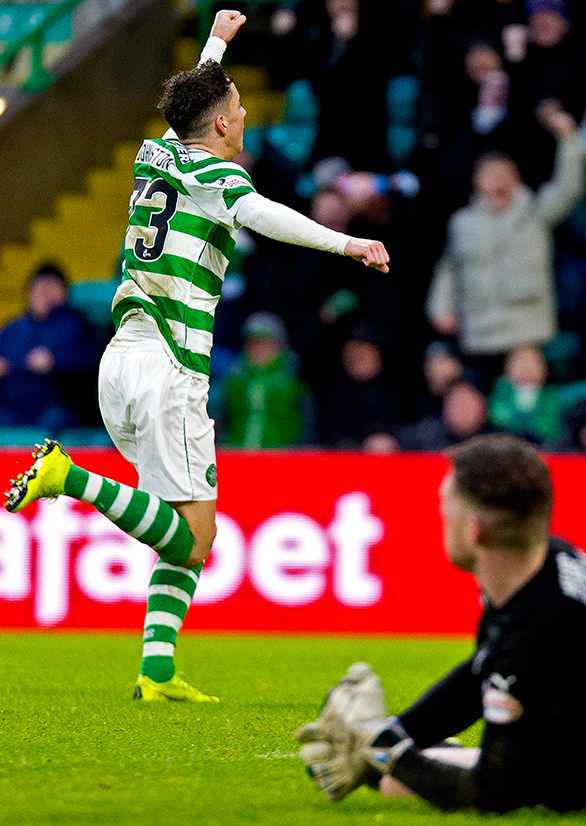 HOOP HOOP HOORAY…Mikey Johnston races away after his strike.

“When you come into men’s football, it’s a different game as it is a lot harder.

“I have learned how to be a team player and it has been a good experience. I didn’t get a call from Rodgers, but his assistant Chris texted me and gave some advice.

“I got on well with both of them and they were really good for me.”

Johnston admitted he would love to have another crack at the Govan side and added: “The Rangers game at Ibrox has stood me in good stead.

“It was a bad result and that is the part that was disappointing.

“It’s something that’s only going to make me stronger as a player. It was a tough day and you want to make amends.

“Hopefully, I’ll get the chance to do that this weekend. I’m not sure if I will, but, either way, I’ll keep working hard.”