The Aberdeen manager believes it’s “common sense” to hand the crown to the champions – if the season cannot be played to a finish.

And the Livingston chief agrees it’s time for clarity amid the chaos of the coronavirus pandemic lockdown.

McInnes acknowledges fulfilling fixtures should remain the SPFL’s priority, but accepts it’s an unlikely scenario as the blank weeks stack up.

That being the case, he insists declaring the current leaders as winners for the ninth successive season is sensible.

The Hoops were 13 points ahead with only eight games to play when the game came to a worldwide emergency halt.

McInnes, speaking to BBC Scotland, said: “If there’s a way this can be finished, we need to not give up on that too soon.

“That is the hope, but we’re all realistic enough to know that, as the weeks go by, it’s becoming less likely. 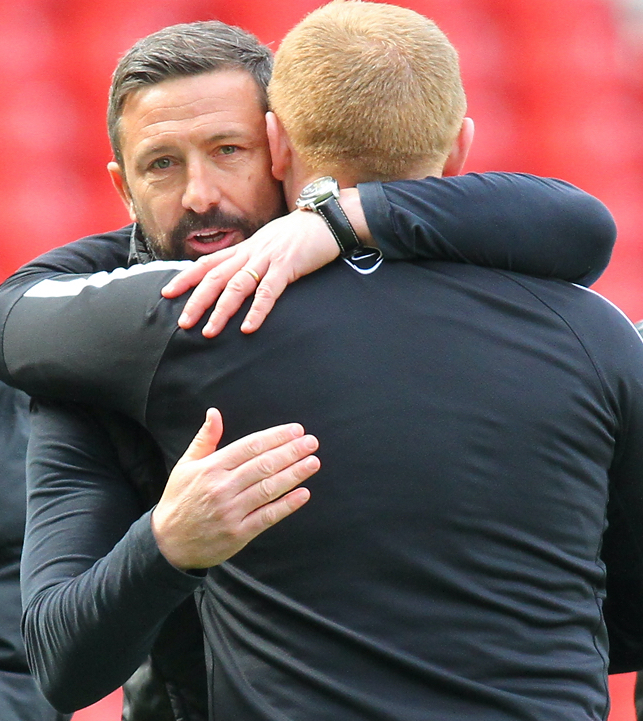 IT TAKES TWO…Derek McInnes and Neil Lennon come together at the end of a game.

“If Rangers and Celtic were closer to each other, it’d be an even tougher decision.

“I think the likelihood is Celtic would go on and win the league.

“I think maybe that decision – if we can’t get the league finished – is, unless you’re a Rangers supporter, might be easier to deal with and see a lot of common sense in that.”

McInnes added: “The UEFA statement doesn’t help, trying to apply pressure. Dave Cormack (Dons chairman) spoke about that, the self-interest there is clear.

“I don’t think any federation should be penalised for doing what they think is fair and right for their country, including ours.”

However, the nation’s football chiefs appear to be softening their stance on ending the Pro League early after crisis talks with UEFA president Alexsander Ceferin.

The game’s rulers were furious at the decision to bring the campaign to a premature end and in a statement the Belgians said: “This discussion was constructive and the intention was expressed to reach a solution together.

“Therefore, the recommendation to close the competition taken by the Pro League will be presented to the UEFA Executive Committee.

“The aim is to preserve European places for Belgium for the 2020/21 season.”

In the midst of the confusion, Livi head coach Holt reckons an immediate decision is required by the SPFL to call time on the season and crown Celtic champions. 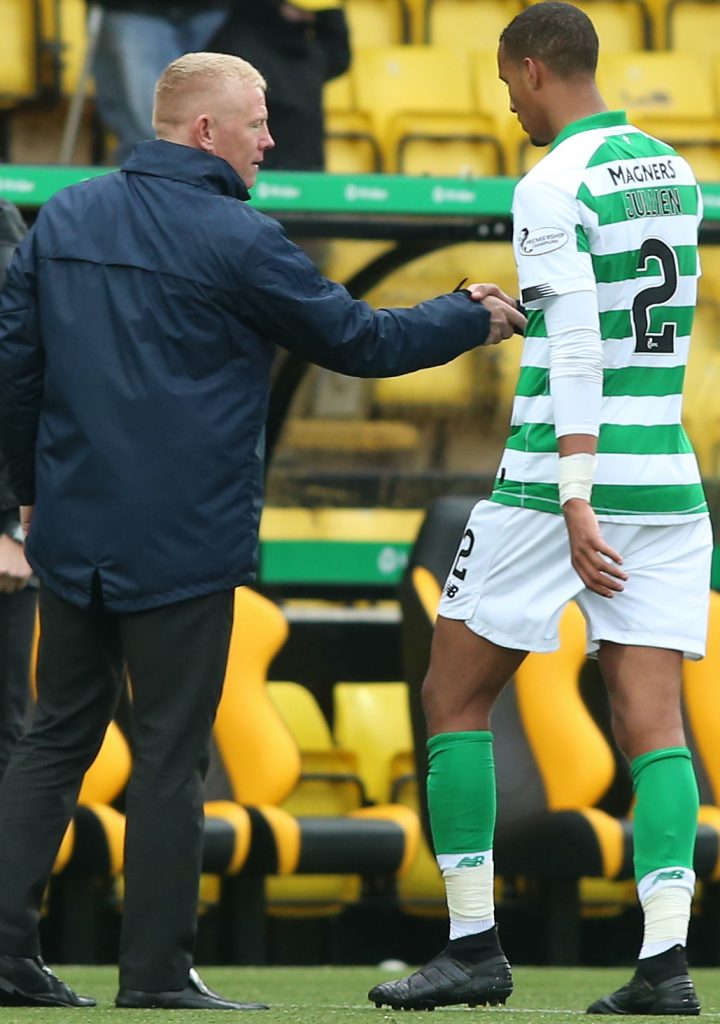 SHAKE ON IT…Gary Holt offers his hand to Celtic central defender Christopher Jullien at the end of Livi’s shock win in October.

Holt, speaking to the Sunday Mail, “My message is to get it done, take the initiative and get it dealt with as we need to put these issues to bed and start sorting other things out. No matter what’s decided, it’s going to be brutal for some people

“But people are being paid very well to show leadership and make these huge calls, however painful they are.

“We need to forget next season, forget what’s ahead of us, focus purely on the present and make a clear and concise decision on the current situation.

“We need to plot a path forward and it’s refreshing to see the Belgian league management board coming out decisively and announcing Brugge as the champions.

“Scotland’s football bosses should follow suit – if it means Celtic are named champions and Hearts are relegated, then so be it.

“I will congratulate Celtic as they’ve been the Premiership’s outstanding team and I will feel sorry for Hearts as it would be a terrible way to be relegated. But there are no easy decisions here.”