THERE are fears Kieran Tierney could be out for A MONTH with his persistent hip injury.

The Celtic defender is facing a fight against time to get fit for the forthcoming Europa League double-header against Valencia next month.

Tierney last made an appearance in the Hoops first team in the 2-1 Group B defeat to RB Salzburg at Parkhead on December 13.

There is no way he will face Airdrie in the Scottish Cup-tie on Saturday, despite getting a place on the substitutes’ bench in the 1-0 defeat at Ibrox on December 29.

He wasn’t utilised against Steven Gerrard’s side and the 21-year-old Scotland international didn’t train with his team-mates during the champions’ winter break camp in Dubai last week. 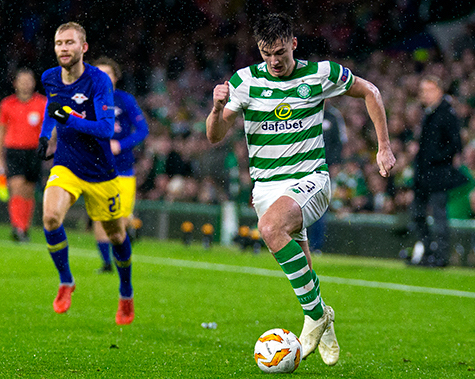 EURO STAR…Kieran Tierney in action during the 2-1 win over RB Leipzig.

Instead, KT and striker Odsonne Edouard, who is also overcoming a knock, were involved with the rehab team.

Tierney could remain out of action with the first confrontation against the Spanish cracks due in Glasgow on February 14 with the return due the following week.

The Parkhead gaffer started with Emilio Izaguirre in the No.3 position in the 4-3 win over Aberdeen at Pittodrie on Boxing Day, but made a change at the interval when he took off the Honduran and put on Jonny Hayes.

Callum McGregor was forced to come out of midfield to fill in the problem slot at Ibrox.

Rodgers has recalled youngster Calvin Miller from his loan stint at Dundee and he could be pitched in at left-back.