NEIL LENNON hailed Celtic’s 3-0 triumph over St Johnstone in rain-lashed Perth last night that keeps them five points ahead in the title race.

The Hoops boss claimed the three-goal first-half was “one of our best performances” of the campaign as the eight-in-a-row champions swept the opposition aside to race to a three-goal interval lead.

Olivier Ntcham thundered in a header for the opening strike and James Forrest zipped in a low right-foot drive on the ground where he scored four goals in 45 minutes last season.

And Lennon was purring with satisfaction before the half-hour mark following comeback Bhoy Leigh Griffiths’ third strike in four games since making his welcome return to the first team after the mid-winter break.

A delighted Lennon, speaking to BBC Sport, said: “The first-half was one of our best performances of the season.

“I thought Oli Ntcham had a great game, I thought James Forrest was brilliant, I though Greg Taylor was outstanding.

“You don’t want to pick out individuals, but, as a team, they functioned perfectly on a really difficult pitch, a difficult night against difficult opponents. 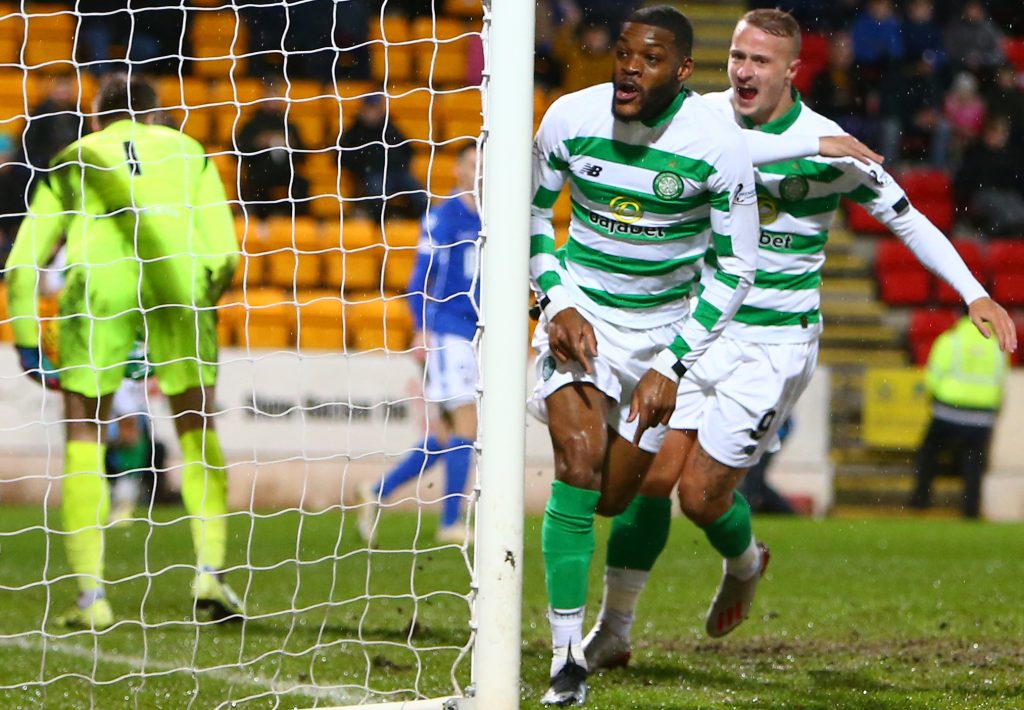 START OF SOMETHING GOOD…Olivier Ntcham is about to be joined by a joyful Leigh Griffiths after opening the scoring against St Johnstone.

The Irishman paired Griffiths with Odsonne Edouard once again in a double-pronged attack and both showed promising signs of a partnership, especially the part they played in the opener when they combined before releasing Forrest who whipped over an inviting cross for the French midfielder to make perfect contact to leave Zander Clark motionless.

Lennon said: “They’re intelligent players and quality players. I’m really pleased for Griff,  it was a great striker’s goal – he should have scored with an earlier header, as well. I just reminded him about that!

“But some of the play and understanding was very, very good.

“He’s got a bit to go, I think he’s honest enough to admit that and he’s determined to get back to the very best Leigh Griffiths, so we’re hoping that’s going to be the case because even at 70 or 80 per cent he’s still a hell of a player.”
There’s plenty of competition for the striker’s berth at the Hoops and £3.5million Polish attacker Patryk Klimala made his Premiership debut as a late substitute for Edouard.

Lennon added: “He’s only been here for a few days, so he’s got a bit of work to do, but you could see toward the end the pace he’s got and the power he’s got.

“He needs to work a little bit on his play with his back to goal, but that will come.”