NEIL LENNON has issued a challenge to Nir Bitton following the Israeli international’s contract extension, as reported in CQN.

The 28-year-old versatile central defender/midfielder has agreed a new deal that will keep him at the champions until the summer of 2023 at least.

Lennon signed Bitton from Ashdod in 2013 in his first spell as Hoops boss and insisted there is still more to come from the elegant player who returned to the squad at the tail-end of last season following almost a year on the sidelines through injury.

The Irishman, speaking to the Evening Times, said: “I like him a lot and he is coming into his peak years. He knows the club and has been here for a while.

“He has had a few injury problems, but when he has played for me since I came back, he has been absolutely excellent. The contract gives him that security now and he can really concentrate on his future here. 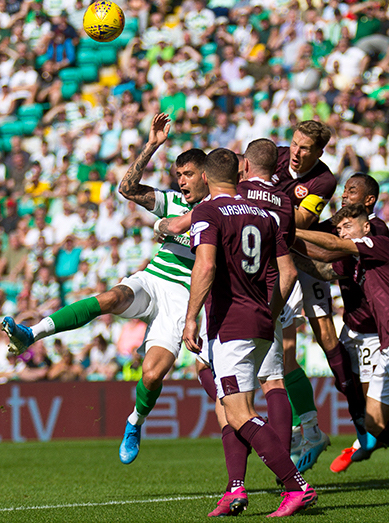 RISE AND SHINE…Nir Bitton takes on the Hearts defence in Celtic’s 3-1 win in August.

“He has fulfilled his potential to a point, but there is more to come. I think he can take more responsibility at times.

“He is talented and powerful. He’s playing really well after returning from his last injury. I thought he was excellent against Hibs on Sunday.

“Before the injury, his performances against AIK Stockholm and against Rangers at Ibrox were really, really good.

“Nir is good around the club and really popular with the boys, so we are very pleased.

”He can play a few roles really well. Ultimately, I see him as a midfield player, but when he slots in at centre-half it’s seamless for him.”

It helps Bitton’s transition from the middle of the park to play alongside Christopher Jullien or Kristoffer Ajer – or both as witnessed in the 2-0 win over Hibs – because the bulk of his 25 international appearances have been in the pivotal role in his nation’s rearguard.

Lennon picked him up for a bargain £700,000 with his Israelu club demanding a 20 per cent sell-on clause.