Celtic Quick News on News Now
You are at:Home»Latest News»LENNY PINPOINTS WHAT CELTS WERE MISSING
By CQN Magazine on 10th March 2019 Latest News

NEIL LENNON revealed some of his Celtic players are “running on fumes” after the goalless draw against Aberdeen at Parkhead yesterday.

The interim Hoops boss, who replaced the departing Brendan Rodgers 12 days ago, admitted he couldn’t have asked for anything more from his team.

The champions dropped their first points at home in this campaign during a subdued display against the Dons who were happy to camp in and hit on the break.

Despite the disappointment, the title kings are still eight points clear at the top of the Premiership with nine games to play and an eighth successive crown within touching distance.

Lennon, speaking to the club website, said: “I’d have loved to have won the game and been 10 points clear.

“But you can’t have everything and they gave me everything, so I’m not going to whip them for that performance. It’s totally understandable. I understand the psychology of a player – a long time ago I was a player myself.

“I don’t think we had time to adjust last week with two games back-to-back. There was always going to be a little bit of a lull and you could see that. I think it’s more psychological than anything else. 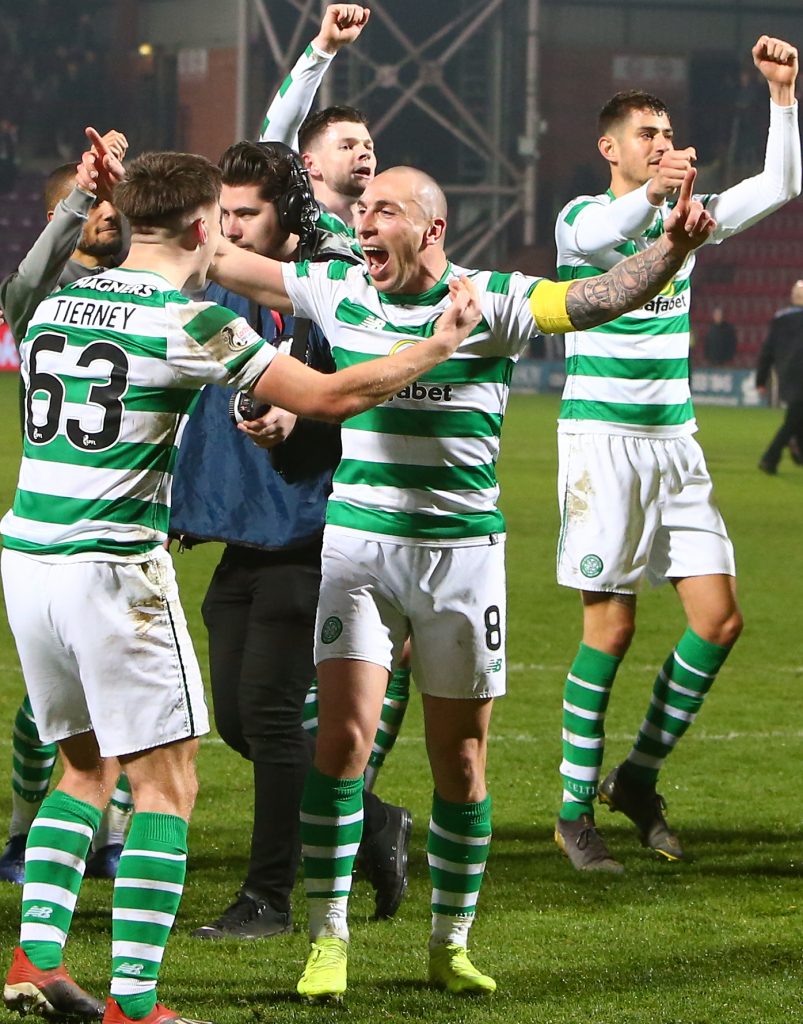 UP IN ARMS…Scott Brown and Nir Bitton, who have been praised by Neil Lennon, celebrate with their team-mates after the 2-1 win at Hearts.

“We just lacked that little bit of pizzazz in the final third.

“We had that adrenaline rush in the first couple of days and there was always going to be that lull afterwards. We had three really difficult games to negotiate in the last 10 days and we’ve come out of it unscathed.

“We take the point, still unbeaten since the turn of the year. It could have been better, there’s no question about that, but these players have given me everything.”

Lennon was again without the midfield services of crocked Callum McGregor, Ryan Christie, Tom Rogic and Oliver Ntcham and there is little doubt their spark and invention could have paid dividends against the Pittodrie outfit when a speak of imagination was required.

The Iirishman added: “Any team would miss the players we have out. They’re top-class midfield players, but Scott Brown and Nir Bitton have done absolutely fine.

“We just lacked that little bit of creativity. Our final ball was a little bit lacking and our final cross wasn’t there. You’ve got to give Aberdeen credit, they’re a tough nut to crack sometimes.

“Some of them are running on fumes. The squad’s decimated with injuries at the minute and, hopefully, we’ll get a few more bodies back and some quality players to add to what we already have.”

The champions have a week’s rest before their next Premiership game against Dundee at Dens Park a week today.