SCOTT BROWN has condemned the thugs who are scarring Scottish football and voiced his fears the game could face a pitch invader carrying a weapon.

The Celtic skipper admitted he was horrified at the sight of Ibrox defender James Tavernier being confronted by a moron as he prepared to take a throw-in during the 1-1 draw with Hibs at Easter Road on Friday night.

Just a week earlier, his Hoops team-mate Scott Sinclair had a glass bottle thrown at him from the same section of the ground that houses the home fans.

The forward was lining up a corner-kick when the object bounced in front of him. Later at the same spot, a coin was thrown at the same player. 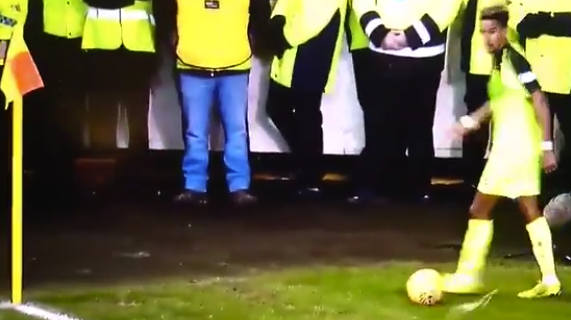 BOTTLE ATTACK…Scott Sinclair watches the object bounce near his foot.

In the wake of two embarrassing and dangerous incidents, the Edinburgh outfit’s chief executive Leeann Dempster branded the actions of a 21-year-old so-called fan who is now in police custody after Friday’s incident.

And she revealed an apology was also issued to Sinclair.

Brown was himself accosted by a Rangers supporter during a game at Ibrox in April 2017 and conceded such occurrences are now taking place far too often.

The 33-year-old Hoops midfielder, speaking to The Mail on Sunday, said: “You just don’t realise it is happening when someone runs up to you.

“Luckily enough, they don’t have something to hit you with because that is going to be the next thing.

“We have got to make sure that doesn’t happen. 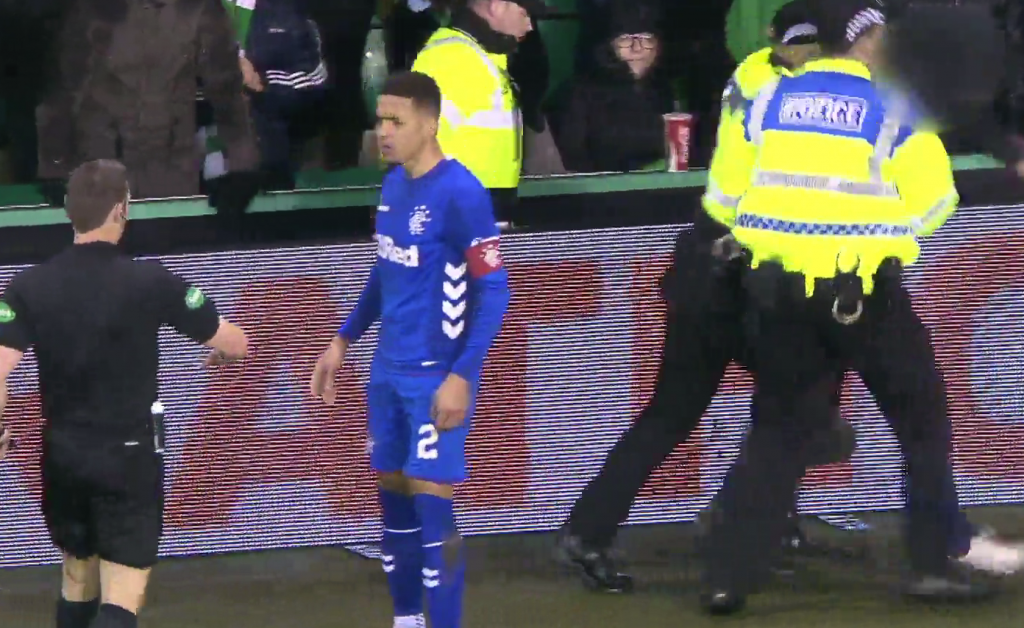 MARCHING ORDERS…the thug is taken away by police after confronting James Tavernier at Easter Road on Friday night.

“It is a disgrace. You can’t have fans running on the park and trying to hit players or kick players or kick the ball. As Leeann says, it is not really a fan, it’s a hooligan more than anything.

“Especially when someone is getting a bottle of Buckfast thrown at them. If that hits someone on the head, then the game ends up getting called off.

“Usually, it doesn’t happen that often in Scotland. Our football couldn’t be in a better place right now.

“We have done well in the Champions League and the Europa League and we just need to get back to focusing on the football instead of individuals killing the game and making it more about them than it is about the teams.