Celtic Quick News on News Now
You are at:Home»Latest News»‘LET ME JUST PLAY FOOTBALL AND ENJOY IT,’ JOTA
By CQN Magazine on 24th April 2022 Latest News

FILIPE JOTA has put all talk of his future on hold as he concentrates on playing his role in making Celtic Premiership champions.

The Portuguese winger, on loan from Benfica, delivered a Man of the Match performance as Ange Postecoglou’s side claimed three more crucial points in the title run-in against Ross County this afternoon.

The revamped Parkhead squad restored their six-point advantage with four matches still to play as they dodged a potential banana skin in Dingwall with a 2-0 win that saw comeback man Kyogo Furuhashi heading in a 12th-minute opener for his first goal of 2022.

Jota set up that effort for the Japanese striker who was making his first start after only two substitute appearances this year and the touchline ace sealed the triumph with the killer second three minutes from time.

Postecoglou has already said he wants to keep the 23-year-old raider, but the pacy attacker simply wants to concentrate on helping the Hoops to be crowned champions and is eagerly anticipating “another good fight” against Giovanni van Bronckhorst’s outfit at Parkhead a week today.

Asked if he had given a lot of thought to his future, Jota, speaking to Sky Sports News, replied: “No, not a chance. I’m just enjoying it day by day and it’s been a terrific season for me.

“I’m learning every day with really quality people so that’s what I’m doing, I don’t have to talk about that.

“I just want to enjoy and give everything for this shirt.

“Of course, as football players we need to keep our minds on the pitch, that’s all that matters.

“Bureaucratic things are for other times, so let me just play football and enjoy it.” 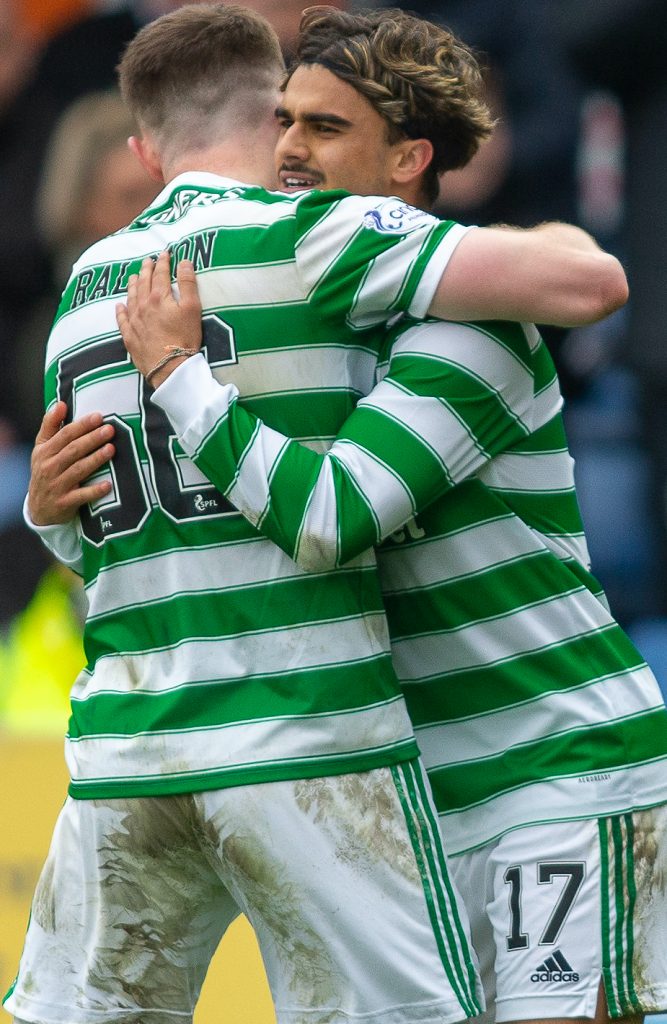 TWO GOOD…Filipe Jota is hugged by Anthony Ralston after his vital strike.

Celtic can go nine points clear with a derby win in the east end of Glasgow in a week’s time that will just about see the title returning to Parkhead for the tenth time in 11 years.

“It will be another good fight, for sure.”

Jota collected his eleventh goal of the campaign which is 10 more than he netted last season when he spent the term at Real Vallodolid who were relegated from La Liga.