Celtic Quick News on News Now
You are at:Home»Latest News»MESSI AND GRIFFITHS TO MISS PARKHEAD CRUNCH
By CQN Magazine on 20th November 2016 Latest News
BARCELONA superstar Lionel Messi is struggling to face Celtic in the Champions League crunch confrontation at Parkhead on Wednesday.
The Argentinian striker, who netted a hat-trick in his club’s seven-goal destruction of the Hoops at the Nou Camp in September, missed Barca’s shock scoreless draw against Malaga yesterday.
Messi, Barca’s record goalscorer – who has notched 469 goals, 16 of them this season – went down with a vomiting bug just hours before the kick-off. 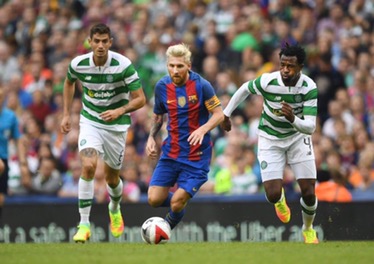 The little maestro’s condition will be monitored for any possible contagious element before the Catalans fly into Glasgow on Tuesday for their Group C clash against the Scottish champions.

With Luis Suarez missing through suspension, Messi’s absence was keenly felt as Barca failed to score in a La Liga match at the Nou Camp for the first time in 32 league outings.
That run stretches back to February 2015, when Malaga again thwarted them to earn a shock 1-0 victory. The goalless stalemate means that Luis Enrique’s side remain second to Real Madrid in their pursuit of a third consecutive title.
Messi’s absence in the east end of Glasgow would be a massive boost for Brendan Rodgers and his team who need to get good result against either the Spanish giants in midweek or at Manchester City next month to have any hope of playing in Europe beyond Christmas.
The Hoops have their own problems with last season’s 40-goal man Leigh Griffiths a major doubt after injuring his hamstring in Scotland’s 3-0 World Cup defeat against England at Wembley nine days ago.
Griffiths is the only Celtic player to have put the ball into the back of the Barcelona goal so far this year, scoring an equaliser in the friendly match in Dublin in the summer.