Celtic Quick News on News Now
You are at:Home»Match Report»MOTHERWELL 0 CELTIC 4: DIDN’T THEY DO WELL – HOOPS TO THE FOUR
By CQN Magazine on 6th February 2022 Match Report

THERE was no stopping scintillating Celtic as they ruthlessly swept away the challenge of Well at Fir Park this afternoon.

A double from Tom Rogic and others from Liel Abada and Daizen Maeda blew away the home side as Ange Postecoglou’s men made sure they would remain at the Premiership pinnacle.

The Hoops staged a remarkable and devastating action replay of the midweek derby as they zipped to a three-goal advantage by the interval.

Rogic got the nod from Postecoglou to return to the first team after missing the previous three outings while he was on World Cup duty with Australia.

And how the elegant playmaker repaid the faith of his manager with two brilliant goals to add to Abada’s breakthrough strike in the 28th minute.

THE RETURN OF ROGIC…Celtic’s Aussie ace marks his comeback with brilliant strike – one of a double – against Motherwell.

It was blistering, breathaking stuff that left the home side demoralised before referee John Beaton put them out of their misery by blowing his whistle for half-time.

They were already three goals adrift – just like Giovanni van Bronckhorst’s Ibrox side four days earlier – and it could have been worse with keeper Liam Kelly making two crucial stops from Abada – just after a minute played – and the energetic and busy Giorgos Giakoumakis.

Credit to Well who were there to make a game of it and who pressed the game high, but the Hoops took control of the situation and two goals in the space of three minutes floored Graham Alexander’s men.

The first goal was beautifully crafted down the left with a neat pass from Greg Taylor presenting an opening for Reo Hatate to size up things in the opposition penalty box.

The Japanese ace, star of the show in midweek, swiftly delivered an inch-perfect pass into space and there was Abada racing clear to tuck the ball behind the stranded Kelly for his 14th strike of the campaign. 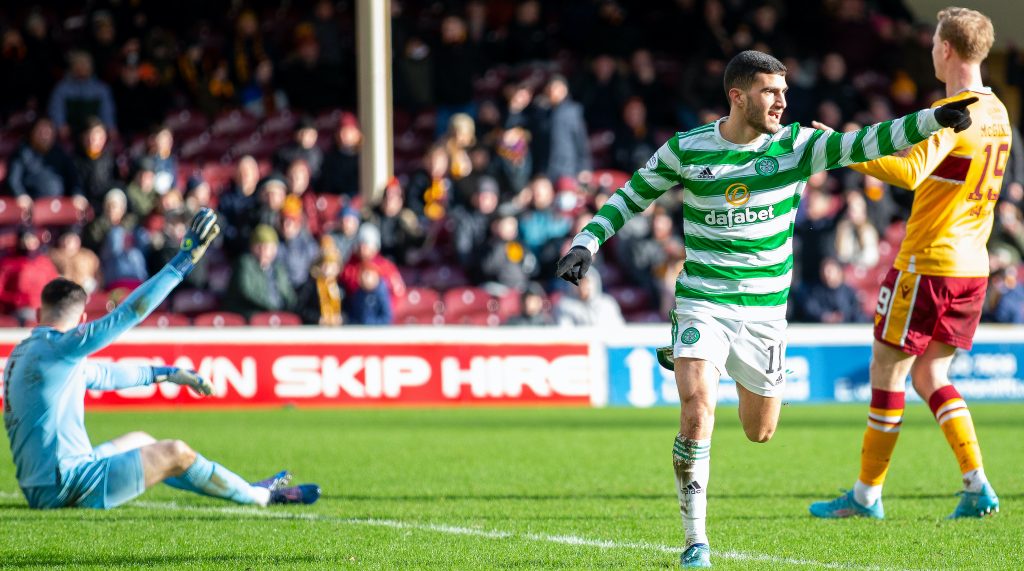 BREAKTHROUGH…Liel Abada turns away in delight after opening the scoring as he leaves Well keeper Liam Kelly claiming offside, to no avail.

The Hoops eagerly went for the jugular once again and Abada was involved when the second effort was tucked spectacularly behind Kelly by Rogic.

The Israeli eased a pass in front of the inrushing Aussie and from 22 yards he nonchalantly walloped the ball high into the roof of the net.

Just on half-time the Wizard of Oz struck again as the visitors relentlessly bore down on the overworked Kelly.

Anthony Ralston released Abada with a peach of a long-range pass down the right and the winger picked out Rogic once more. The playmaker didn’t hesitate as he hit the ball first-time from eight yards and his effort soared high into the net. 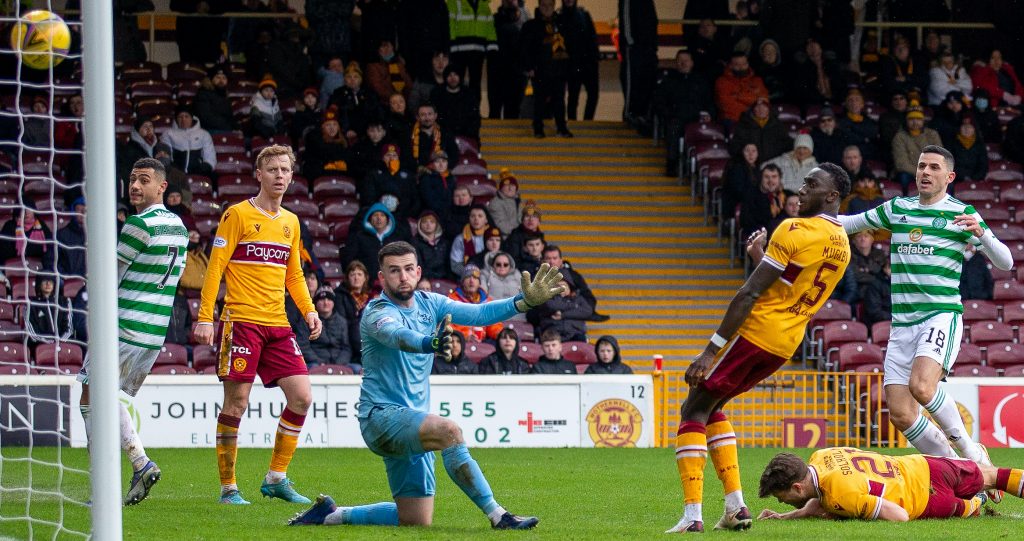 THREE AND EASY…Tom Rogic makes it 3-0 before half-time as he clips the ball high past Liam Kelly.

Sensibly with a hectic schedule ahead, Postecoglou withdrew Hatate and Abada at half-time and put on Nir Bitton and James Forrest.

Six minutes after the interval, Joe Hart displayed his concentration and reflexes when he launched himself full-length to the right to push away a shot from Joe Efford that had taken a deflection off Cameron Carter-Vickers.

Only moments afterwards, skipper Callum McGregor, now playing in an advanced role, blazed over from a good position.

Just after the hour mark, Postecoglou introduced Filipe Jota and Matt O’Riley to the action and withdrew Giakoumakis and the Hoops captain.

In the 67th minute, Jota set up Forrest with a neat cross from the left, but the winger’s point-blank header was blocked by Kelly. 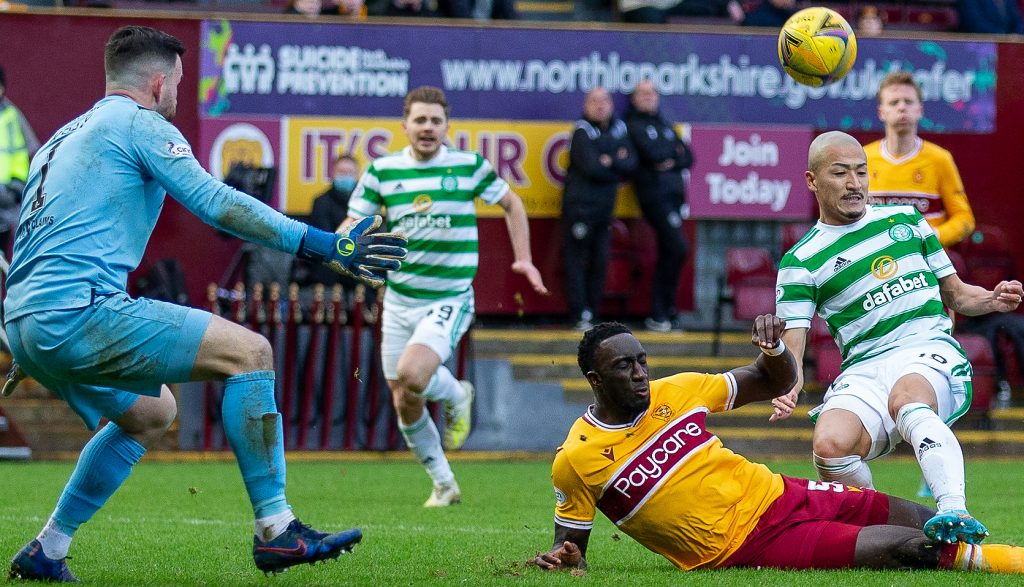 NUMBER FOUR ON ITS WAY…Daizen Maeda is tackled by Bevis Mugabi as his effort loops over Liam Kelly.

Four minutes later, Celtic got the fourth goal they undoubtedly deserved. O’Riley sent Maeda clean through the middle with another accurate pass and the hard-working attacker raced into the box with defender Bevis Mugabi making a last-ditch challenge.

Maeda’s effort was sent looping over the helpless Kelly and dropped into the net to the joy of the travelling support.

Amazingly, the new Bhoy should have had added within a minute, but he was wasteful in front of goal after being presented with a wonderful opportunity by Jota.

CHEERS…Daizen Maeda celebrates his goal in his own unique fashion.

Kelly then defied the Portuguese ace before Rogic was denied a hat-trick by the woodwork when he worked a long-range one-two with Jota. The Aussie came in on the blindside from the right, but his finishing effort thudded off the near post and deflected to safety.

With 10 minutes remaining, Josip Juranovic came on for Taylor as the Hoops saw the game out.

Now all eyes are on Pittodrie on Wednesday night and a meeting with our old friend Scott Brown and his Aberdeen team-mates.