Celtic Quick News on News Now
You are at:Home»Latest News»MY SPOT OF LUCK
By CQN Magazine on 6th May 2016 Latest News
LEIGH GRIFFITHS reckons he was LUCKY to get on the goal trail in the Premiership this season.
The Celtic hitman took his league haul to 30 with his effort in last week’s 3-1 win over Hearts at Tynecastle.
Griffiths has also claimed four in Europe, four in the Scottish Cup and one in the League Cup to take the total to 39 strikes during his award-winning campaign.
But the 25-year-old Scotland international star admitted he got the rub of the green with the effort that kicked off the league landslide. 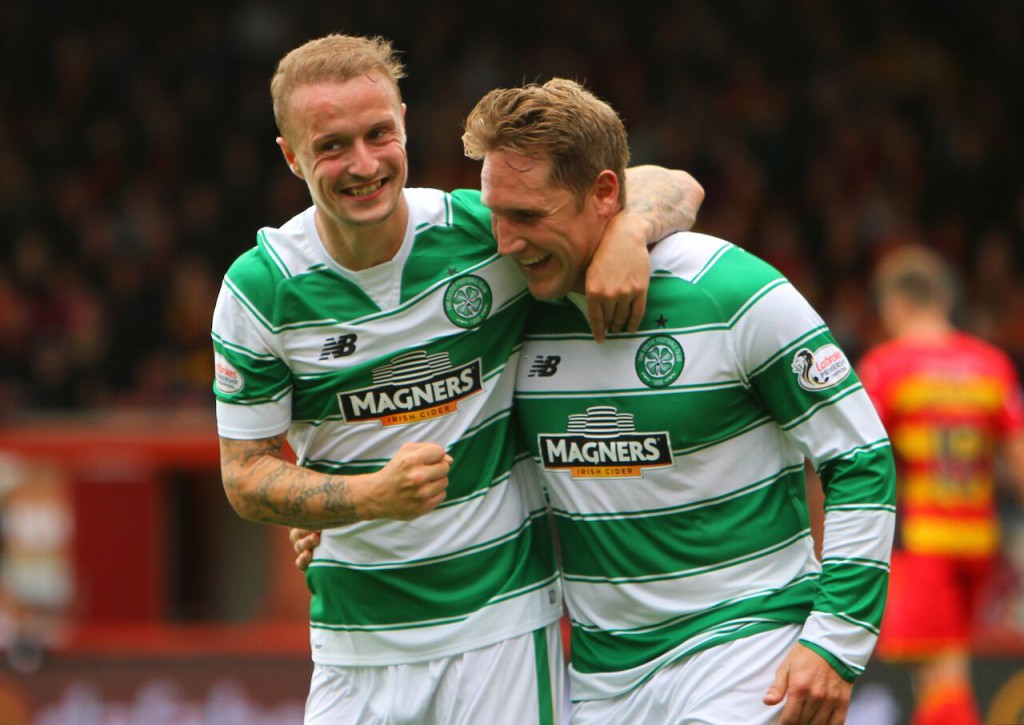 He said: “My first Premiership goal actually came in the third minute of the opening game against Ross County at Parkhead back at the start of August.
“I was brought down in the area and the referee immediately awarded a penalty-kick.
“To be honest, I wasn’t sure if I was going to be okay to take it.
“My calf was still sore after the challenge from the County player. But I managed to get back to my feet, dust myself off and I was lucky to score.
“I hit the ball to goalkeeper Scott Fox’s left and it just went in under his body.
“And I think I only lasted another 10 minutes or so before I was forced to come off because my injury got worse.
“Stefan Scepovic came on and Stefan Johansen hit our second goal as we won 2-0 to get off to the perfect start in the defence of our title.”
Griffiths rates a goal against Sunday’s opponents Aberdeen as one of his best of the season.
He recalled: “It was still goalless and heading for the interval when I took my chance.
“Young Kieran Tierney delivered a great cross from the left and I managed to get in between Ash Taylor and Paul Quinn to direct a header away from keeper Danny Ward. 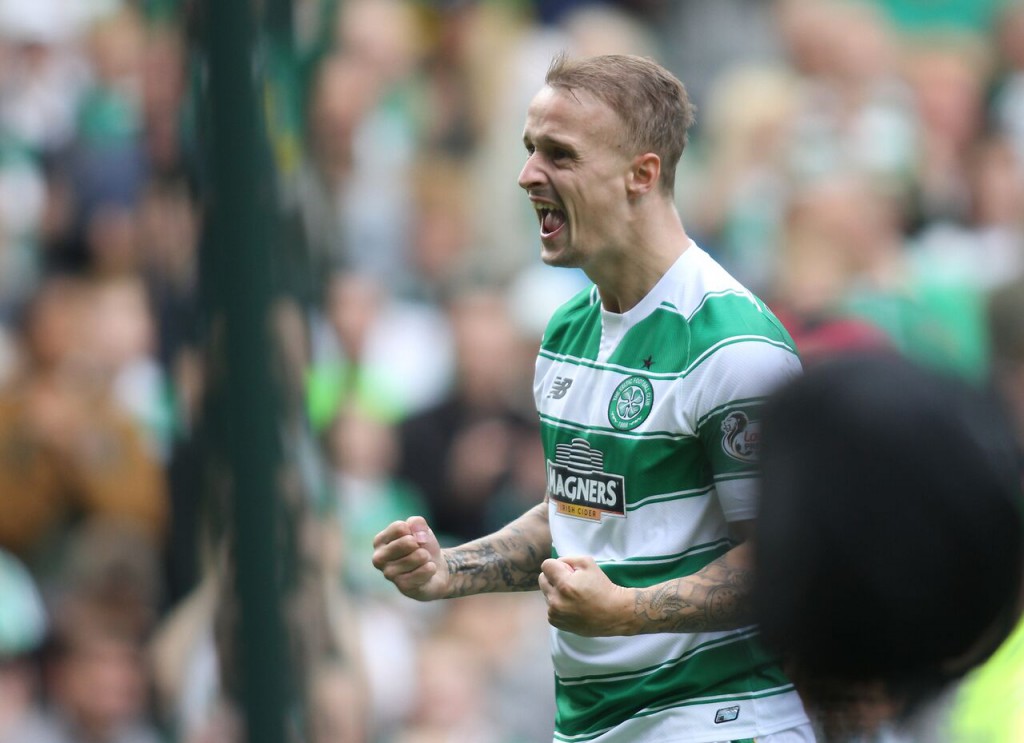 “It was an important time to get a goal. I scored with a penalty-kick in the second-half and James Forrest added another as we won 3-1.
“My favourite goal of the season so far, though, came in the League Cup against Hearts at Tynecastle on October 28, just three days before the effort against the Dons.
“I drove at a defender to try to commit him and make a yard of space so I could get a shot away.
“It just so happened I touched the ball through his legs and I opened my left foot up and managed to put a shot in the far corner.”
Griffiths also paid tribute to his team-mates for his exceptional personal campaign.
He said: “I’ve always been a goalscorer wherever I have played, Livingston, Wolves, Dundee, Hibs and now Celtic.
“But, of course, it helps that I’ve got so many good players around me to set up the opportunities.
“If they put the chances on the plate, then I reckon I’ll score nine times out of 10. 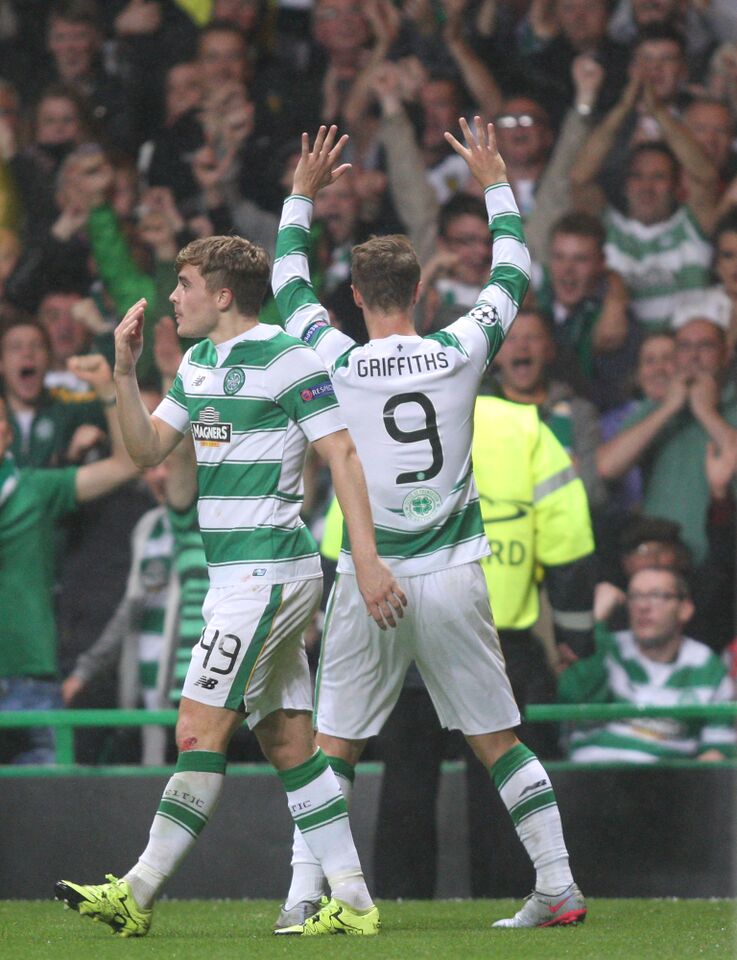 “It’s always nice to score a solo goal, but team efforts are the ones the fans will remember the most.
“You would rather have everybody involved in the play, but I admit it is always good to have an individual goal on your CV.”
Griffiths scored his 50th goal for the Hoops in the 4-1 victory over Dundee United at Tannadice in January and he now has his eye on becoming a ton-up Bhoy.
He said: “Obviously, the next milestone is to get to 100. Once I reach that, I will kick on from there.
“Before that, of course, I hope to hit 40 for this term. The boys are in good spirits and we will go again on Sunday.
“We know Aberdeen will come to Glasgow looking to spoil the party, but as long as we get our foot over the line, that’ll be us.
“At times, we haven’t played the best, but we have always stuck together as a squad and tried to grind out results.
“Of course, that’s what champions do and we have always said we would be champions again at the end of the season.”
* Griffiths was talking to Celtic TV.
——————————————-
Have you ordered your SIGNED copy of Charlie Gallagher? What a Player! – the brilliant new biography published by CQN celebrating another one of our Lisbon Lions? Charlie will sign your book and we’ll also include a FREE gift for you to enjoy!
It’s Father’s Day next month – Charlie’s book will make a great gift for your old man!
Order HERE or click on the image below.