‘Ronny’s Roar’ is a book that celebrates Ronny Deila’s double triumph, and looks forward to exciting times ahead for the club.

Ronny Deila might have been a surprise appointment when he was announced as Celtic’s seventeenth manager on June 6, 2015, but he soon proved to be a successful one, delivering the SPFL Premiership league title and the League Cup in his first season at the club. Not only that, but his ‘Ronny Roar’ has now become part of Celtic’s post-match celebrations, and has further endeared him to the Hoops support. 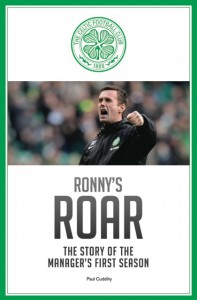 Celtic’s Norwegian manager showed great character and resilience during a tough start to his tenure, and having come through that, he is now looking forward to delivering further success, both domestically and in the European arena, to the club.

This new Celtic book, ‘Ronny’s Roar’, tells the story of the successful 2014/15 season, from Ronny Deila’s appointment through to the trophy day celebrations on the final day of the season, and beyond, with the manager looking to the future.

Paul Cuddihy has exclusive access to the Celtic manager and together they look back at the memorable moments of the campaign, while Ronny Deila gives a series of fascinating insights into his first impressions of Celtic, his football philosophy, the importance of diet and nutrition, the players and the fans, as well as a host of other subjects.

You can now order your copy of Paul Cudahy’s new book ‘Ronny’s Roar’ direct from CQN for £12 plus P&P –  ORDER HERE!

PS, The CQN Bookstore is currently down for essential maintenance and an upgrade in line with the new look Celtic Quick News site. In the meantime you can order any of  the extensive range of Celtic books or DVDs from our Amazon page, just search for Celtic Quick News.