Celtic Quick News on News Now
You are at:Home»Match Report»ONE FOR THE ROAD: CELTIC 2 ABERDEEN 1 (Game seven, Dec 21)
By CQN Magazine on 20th May 2020 Match Report

AWESOME Odsonne Edouard struck again with the welcoming winning goal as Celtic notched up their tenth successive league triumph in Paradise this afternoon.

The French ace’s crucial counter eased the champions five points clear at the top of the table in their quest for the magical nine in a row.

It took the £9million man to supply the killer touch again to give the Hoops the victory they so richly deserved against opponents who fought all the way.

And it was a French double that counted on a nervy afternoon in the east end of Glasgow after Christopher Jullien had opened the scoring early on. 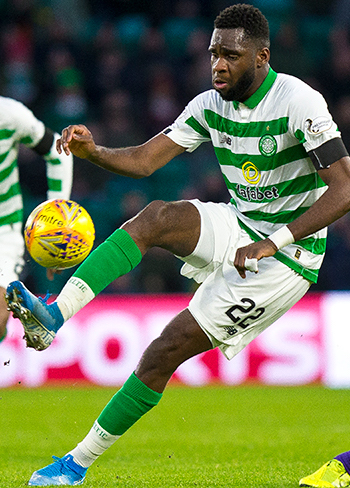 The Hoops were desperately unlucky not to take the lead following a third-minute corner-kick from Ryan Christie when Jullien cleverly flicked an effort towards goal and held his head in hands as the ball smacked off the crossbar.

Only moments later, Jeremie Frimpong, threatening as ever on the right, sped into attack to deliver an inviting cross with Edouard poised, but the defence smuggled the ball clear.

A breakthrough goal just had to come as the champions relentlessly piled forward and once again it was the combination of Christie with an accurate left-wing corner-kick and the alert Jullien that did the trick in the seventh minute.

On this occasion, the French centre-back made contact with his left foot and fired the ball into the ground and keeper Joe Lewis was left helpless as the effort bounced high into the corner. It was the whirlwind start Neil Lennon had asked from his players and they had delivered in fine style.

The £7million defender looked particularly happy with his fourth goal for the club since his summer arrival.

In the 12th minute, Christie tried to double the advantage with a drive from outside the box, but the playmaker was just off target. 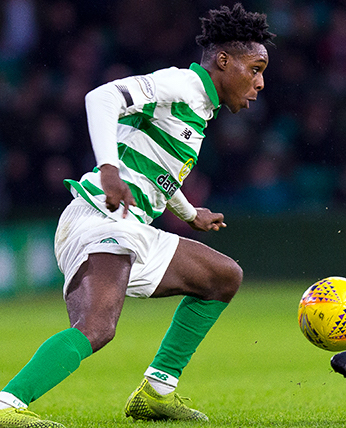 DUTCH OF CLASS…Jeremie Frimpong was in the thick of the action again.

The Dons, who conceded four goals at Pittodrie against the Celts earlier in the season, were on the back foot as Lennon’s side surged forward with intent.

James Forrest had a shot blocked, Olivier Ntcham fired waywardly over the bar and then Edouard brought out a superb diving save from Lewis as he got down swiftly to his left to parry a shot from the Frenchman.

However, the keeper was left standing when Christie thumped in a vicious first-time left-foot drive that whistled just past the post.

Next up, Boli Bolingoli fashioned an opening for Edouard and the home fans were already acclaiming a goal until the striker’s shot was deflected to safety.

Astoundingly, the Dons levelled in the 35th minute with their first attempt on target. The Hoops defence fell asleep as a ball came over from the right and Sam Cosgrove – of all people! – was left totally unmarked as he hammered a header from a Niall McGinn free-kick past Fraser Forster at his right-hand corner of the net. It was a real smash-and-grab act by the visitors who had been on the ropes up until that crucial moment. 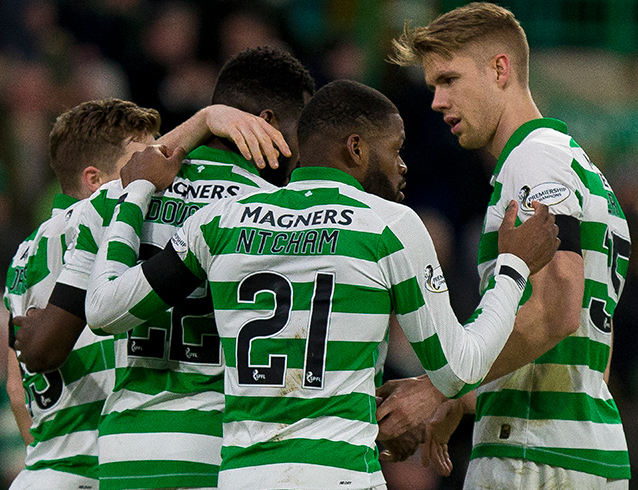 GOAL-DEN BHOY…Odsonne Edouard is congratulated after claiming another crucial strike.

Celtic thought they had won a free-kick in a good area after Christie was sent tumbling. but referee Euan Anderson booked the midfielder for simulation.

And the match official provoked the ire of the home fans when he refused a penalty-kick after a reckless challenge from James Wilson brought Edouard crashing to the turf. It looked a stonewaller, but the ref, amazingly, waved play on. It was a mystifying decision.

In first-half stoppage-time, Ntcham had a glimpse of goal, but again was just wide. The Dons were living dangerously, but half-time arrived with the visitors still on level terms with the Hoops who had dominated right from the sart.

Celtic restarted where they had left off and Forrest had an early chance, but his finishing effort lacked precision and Lewis was able to save. A shot either side of the Dons No.1 would almost certainly have brought greater dividends.

Lennon made a change in the 62nd minute when he introduced Mikey Johnston for Ntcham to give the team fresh impetus.

And the switch paid off four minutes later when Edouard struck for his 16th goal of the season to soothe the nerves of the Celtic fans – and his manager! 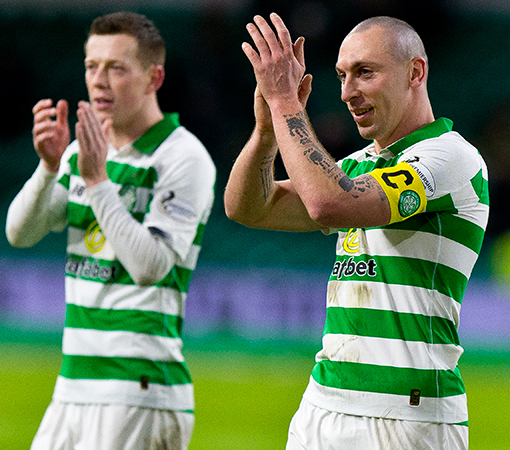 Christie was involved yet again as the opportunity fell at the feet of the talismanic striker and he didn’t hesitate as he swept a low left-foot effort wide of the despairing Lewis to restore the champions’ advantage.

Two minutes later, Johnston had a shot saved by the Dons captain as the Hoops stormed into attack in pursuit of a third goal.

The game exploded in the 70th minute when Cosgrove, the team’s first-half hero with his headed goal, was red-carded for a wild challenge on Kristoffer Ajer. The Norwegian had just won a tackle when the big frontman threw himself at the defender and referee Anderson had no option but to order off the Englishman.

In the 71st minute, Forrest came within inches of netting a third with a flashing shot that edged wide.

Six minutes later, Leigh Griffiths was introduced for the tiring Edouard and Tom Rogic also came on for Forrest in the 82nd minute as Lennon locked up the midfield in attempt to seal the deal.

Now all eyes are on the Boxing Day meeting with St Mirren in Paisley as the Hoops juggernaut rolls towards 2020.