BRENDAN RODGERS slammed Motherwell for their lack of sportsmanship as Celtic edged closer to their eighth successive Premiership title with a 4-1 triumph at Parkhead this afternoon.

And the Hoops boss insisted they should have let his side SCORE to balance their controversial actions that brought them a goal.

The champions were 2-0 ahead when they put the ball out of play with Ryan Christie injured and sitting on the turf awaiting treatment.

However, instead of following unwritten protocol of returning the ball to the opponents, James Scott raced on to the throw-in and went straight for the Celtic goal with the defence out of position.

The home fans looked on in stunned silence as the youngster then had a shot on target that was pushed away by Scott Bain.

The rebound fell to Gboly Ariyibi who slammed the ball into the inviting net to claim the first domestic goal against the keeper in 15 outings and the debut strike against Rodgers’ men in 2019. 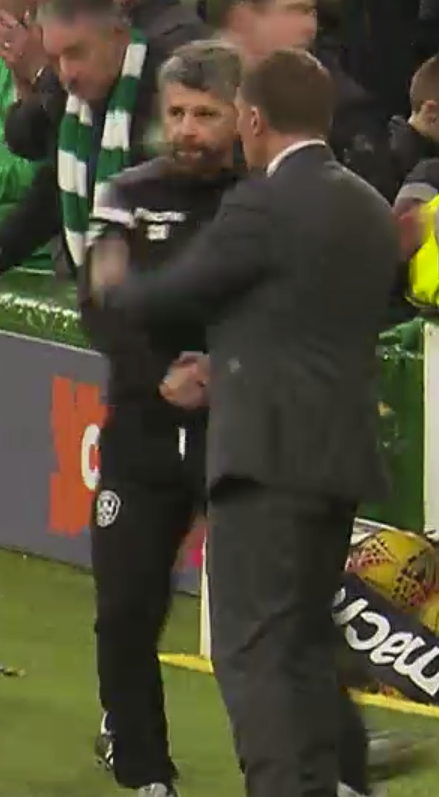 ALL’S WELL…Brendan Rodgers shakes the hand of Motherwell boss Stephen Robinson at the end of a controversial affair.

Rodgers felt Stephen Robinson should have told his players to allow Celtic to walk through and score from kick-off to make amends.

He said: “It was a really disappointing act on a football pitch. My players have had a really tough game on Thursday with 10 men and then come into what we know is going to be a tough game today against a team who is doing very well.

“We get 2-0 up with some good goals, really good quality, to have that control in the game and then to have that goal against.

“Sometimes the referees up here get criticism, but the criticism goes to the players, because that wasn’t a good act at all.

“And Motherwell have got the opportunity to redeem themselves and maybe let us score, but it wasn’t the case.

“They push on and wanted to try and push for an equaliser and that’s why I am so proud of the team because they showed not just their qualities, their guts, their determination, playing out of position, young players like Ewan Henderson who was brilliant today.

“Players who haven’t played for a while going and getting the 4-1 win is why I’m so proud of them.

“My only disappointment was that the players have a goal against them they didn’t deserve because they were heroic in how they worked and everything they put in the game.

“Like I say, they take pride in not conceding and that’s a goal that should never have stood.” 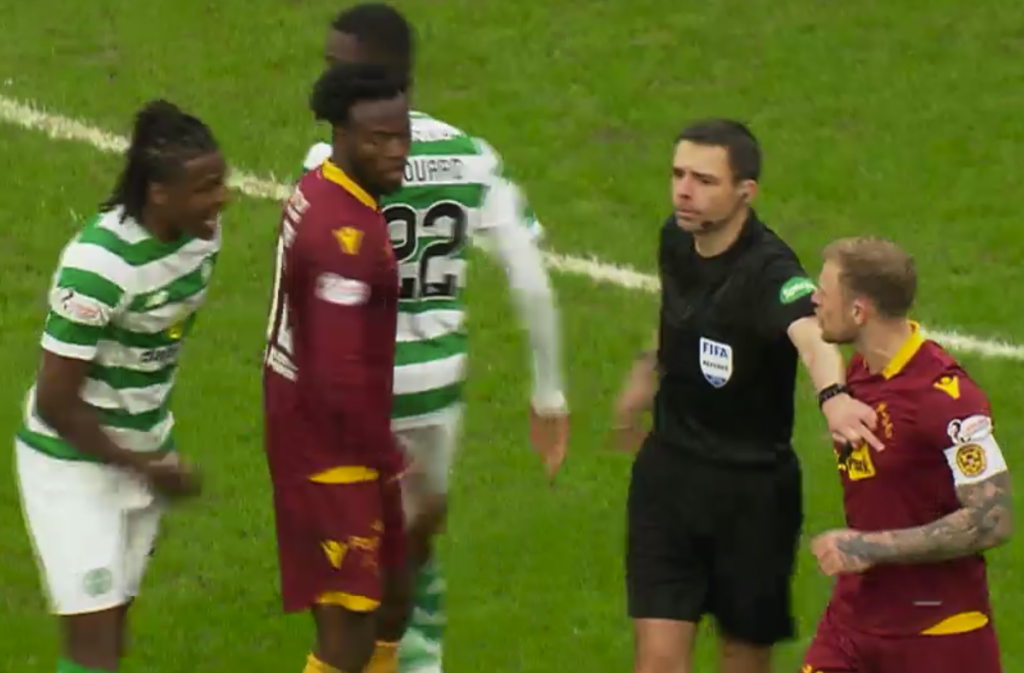 When it was put to Well boss Robinson that Rodgers felt he should have told his players to let Celtic score, he revealed he was a bit embarrassed and said he was confused about what happened next.

He insisted: “In truth, I didn’t know what to do. I’d never been involved in something like that. It was a young boy, starting his first game, on a couple of hundred quid a week.

“A great prospect that we’ve got high hopes for and he’s got caught up in the occasion. It shouldn’t have happened, but it did and the only problem is it will deflect from how good a performance we put in.

“When we scored the controversial goal it was still 2-1 to Celtic, they weren’t down to 10 men. We went on to dominate that game for 30, 35 minutes at Celtic Park against a top side and that’s a pleasing aspect of where we’ve come from since January, but obviously it was in controversial circumstances.

“There’s no point in me lying. I was a wee bit embarrassed and I said to Brendan: ‘I’ve no idea what to do’.

“So, the boy has made an error but he’s a kid and he’ll learn from that. It was a lively Sunday afternoon.”

Following strikes from Odsonne Edouard (2), Scott Sinclair and Oliver Burke, Rodgers’ men are still eight points ahead at the top of the Premiership after Rangers had won 5-0 at Hamilton Accies earlier in the day.

James Tavernier was among the goalscorers with a penalty-kick.