Driving through to Celtic Park last night for the launch of Brendan Sweeney’s excellent book Celtic; The Early Years (order HERE), we turned over to Clyde 1 to catch the start of their phone-in. We listened to one call, from a ‘Celtic’ supporter who wanted to say that Ronny Deila needed to win the Treble at least this year. He stated that next year Rangers would be ‘back’ and that Rangers fans would never let ‘us’ Celtic supporters away with the shame of not winning at least one Treble when they were ‘away’.

Then coincidentally Alex McLeish, former manager of the former Rangers is all over the papers today saying that even a Treble will not be enough to save Ronny’s skin at Celtic.

During the week we’ve had former players wheeled out one at a time, Bonner, MacLeod and Provan who kicked off the campaign last weekend. Provan had this to say:

“Ronny Deila must not be allowed to lead my old club into next season’s Champions League qualifiers. Sorry, but the Norwegian is well out of his depth.
“This isn’t personal. I’ve never met Ronny who looks the type you’d want to share a beer with. But there’s too much at stake to send him back to the Champions League poker table. Deila’s treble of Legia Warsaw, Maribor and Malmo has already cost the champions the thick end of £40million. Celtic CAN’T risk another £20million on him.
“That’ll be Peter Lawwell’s call  and the Celtic supremo is savvy enough to recognise his own reputation is now on the line. Despite Deila’s poor record in Europe, Lawwell hasn’t flinched. The Norwegian should be grateful for that support. At the game’s sharp end, he’d have been out long ago – just ask David Moyes.
“Mind you, it’s in Lawwell’s interest to see Deila come good. The Hoops’ chief executive has invested his own credibility in the Norwegian. In a major break with tradition, the left-field appointment of an unknown Scandinavian was bold, to say the least. Deila was entrusted with changing the entire culture of the club. Out went the Lennoxtown deep fat fryer, in came development coaching, dieticians and psychologists. 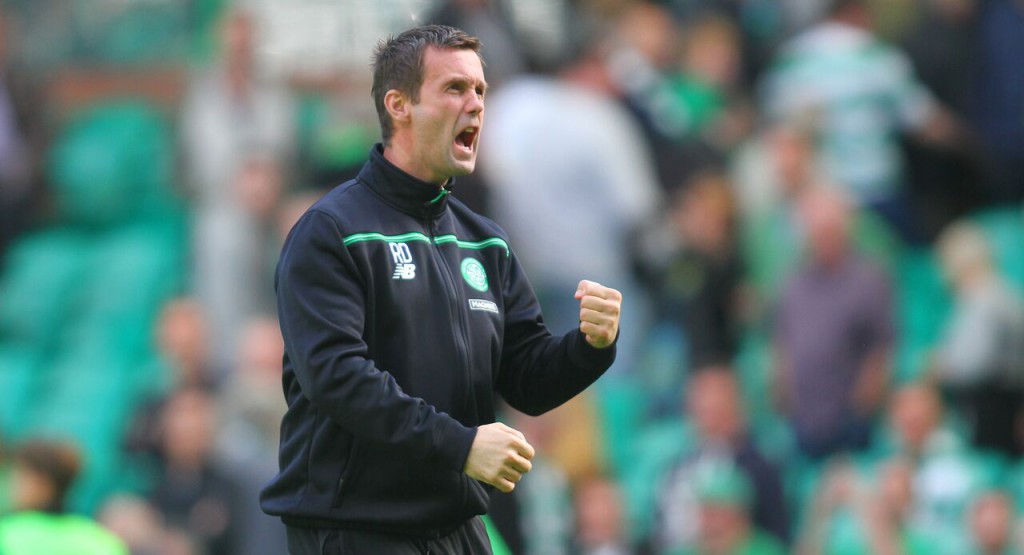 “Fine, if the new approach is reflected in results. Seventeen months on and we’re still waiting. If Lawwell thought he was getting football’s Deila Lama from Stromsgodset, he knows better now. Thursday night’s team selection and performance in Molde should have boardroom suits sweating. Against the current seventh-best team in Norway, Celts were fortunate to get out of town without a real spanking.
“If Lawwell’s trigger finger isn’t twitching, I’d be surprised. If he allows Deila to fail again in the Champions League, punters will want him strung up. It’s hard to see how he can justify giving the Norwegian another shot. Where is the progress Deila describes?
“Defensive mistakes that have blighted his reign are still there. What is he telling them on the training ground? Either way, it’s time to look beyond Efe Ambrose and Emilio Izaguirre and question the guy who is still picking them. How many times will Deila watch his defence fall apart before he fixes it?
“His judgement in the transfer market has also been poor. Dedryck Boyata? For a player just out of the Etihad dressing room, he’s been all over the place. The misplaced pass at the first goal in midweek was unforgivable.
“Scott Allan? Hopefully, one for the future, but another midfielder was hardly a priority.
“Nadir Ciftci? Doesn’t look half the player he was at Tannadice at a time Celtic are crying out for proper quality up front.
“Carlton Cole? Unwanted in England, Cole’s agent did brilliantly getting him an 18-month deal in Glasgow. But does anyone think Cole is Champions League material? 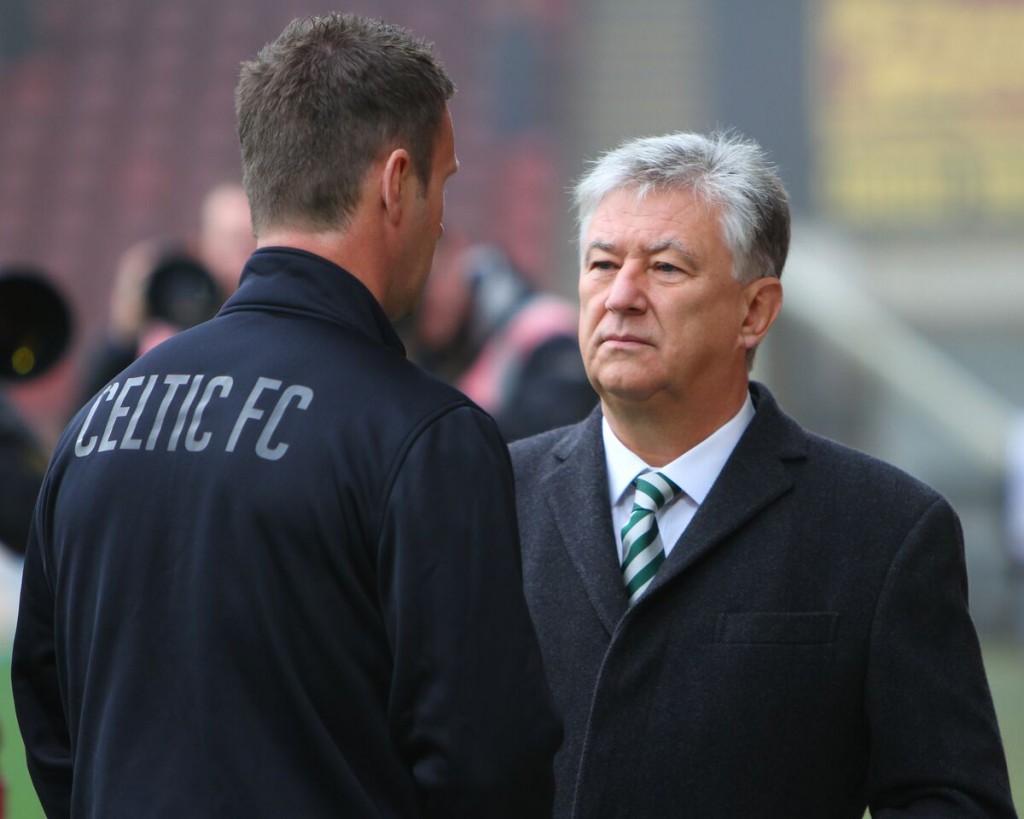 “After Celtic’s latest exit from the competition, I pinned their failure on a lack of investment in the team and the lack of a proper coach. I stand by that view.
Trust me, there is no pleasure in seeing Deila failing and you can only admire his conviction.
“There he was pre-match in Molde telling us how much his team had improved. We even had Ole Gunnar Solskjaer tipping him for a job in the Premier League. Really?
“If Thursday night’s performance in Norway represents progress, then God help him. If anything, the Molde result exposed the truth of this Deila “project”.
“Despite a year-and-a-half of spin, Celtic haven’t improved an ounce under Deila. Ronny is either deluded or playing for time. He knows he’ll have another title on his CV by next May. With Aberdeen’s bubble bursting and no other opposition, Deila is odds-on for a domestic Treble.
“Would that be enough to keep Lawwell onside? After this latest European humbling, I doubt it. I can’t see Lawwell buying the Ronny Roar much longer and if he doesn’t already have Plan B up his sleeve, I’d be surprised.
“If Lawwell calls time on Deila, Paul Lambert would be well in the frame to succeed the Norwegian. Lambert’s knowledge of the club and European football would put him in the box seat. It’s a big call for Lawwell.”
That was last weekend. Remarkable how the same ‘theme’ has been running through the media stories this week.
Today Ronny Deila responded in brilliant fashion. Ronny said:
“People can talk but we have to do it. Others can watch and can work in media, I want to work in football.

“I have to think about the people inside this club.

“Celtic have been unbelievably successful for many years and everyone wants to hurt us and find negative things and that is something this club has to cope with all the time.

“What is important is that this club sticks together, Celtic fans and those who work for Celtic, and we have to be proud of what we have achieved.

“Four titles in a row in the league, we won the League Cup last year, the club has been in Europe for many years and they are the pride of Scotland in Europe. So many positive things are happening around here.

“And whoever is coming out and saying things about Celtic to put pressure on us, it doesn’t affect me, but it motivates me a lot. Whatever other people are talking about, people who have never been at Celtic, I couldn’t care less.”

And in a reference to ex Rangers manager McLeish and his comments:

“Where are Rangers now? They are in the Championship. When they lose against St Johnstone everything is OK. If that was 10 years ago, do you think it would be the same?” he added.

“When we lose one game, everything turns around against us. We don’t use money we don’t have but when you build things you have to be patient. But we are winning at the same time as well.

“Negative things sell well – you get more clicks – but we need to focus on the positive things.

“Where are the other Scottish teams? I don’t know. I haven’t seen them in Europe. The national team is not in Europe either – they didn’t go to the Euros.”

McLeish played an EBT fueled side funded by borrowed money that was never repaid and the excesses and the tax cheating led that club to its death in June 2012.

Ronny Deila, unlike Packie Bonner, wasn’t promoting his book. (However if you want a copy of Ronny’s book Ronny’s Roar you can get it from CQN here – see Packie you can promote the odd book or two without sticking the boot into our club).

This ‘Even a Treble is not enough’ stuff has all started in the week when Level5 started promoting their new client Ladbrokes and when Dave King released the latest bizarre statement from the Ibrox bunker in which he revealed that Mike Ashley was taking legal action against the club formed in 2012.

Provan, MacLeod, Bonner and for different reasons Mark Wilson you have all this week opened your mouths and did nothing but harm to your reputation with the Celtic support.

And one more book to mention, the follow up to Caesar & The Assassin, goes to press on Monday and out in two weeks…