Celtic Quick News on News Now
You are at:Home»Latest News»ROVERS, CELTIC CHARITY COLLECTION DETAILS
By CQN Magazine on 19th January 2017 Latest News
ALBION ROVERS have issued a statement ahead of their Scottish Cup-tie against Celtic. We are sure that the 8000 plus Celtic supporters attending Sunday’s match will be interesting in supporting this. Can’t wait to get back to watching the Bhoys…
Here is the statement from the wee Rovers reads:
“We are delighted to announce that during Sunday’s William Hill Scottish Cup clash with Celtic, a bucket collection will take place – raising money for two charities.

“Of all the money collected, half will go to the Kieran McDade Foundation – a charity set up by teammates of the former Dunbeth Football Club youngster – raising money to provide sport clubs with defibrillators.

“The other half of funds raised will be put into the Rovers Charity Trust – the group that invests money into boosting the club’s community relations.

“Buckets will be found around the ground before the match, during half-time and at the end of the match.” 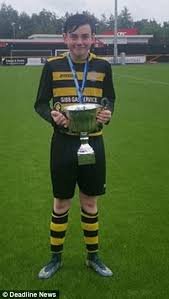 Martin Holmes, from the Kieran McDade Foundation, said: “Everyone at the Kieran McDade Foundation would like to express our gratitude to the Directors, players, staff and, of course, supporters of Albion Rovers for their continued support.
“It takes a special club to do this, and Rovers certainly come into that category. “Rovers and Celtic – together, let’s make a difference.”Albion Rovers community coach Tony McMinn said: “The bucket collection on Sunday will be a worthwhile investment into the community of Coatbridge.
“The Kieran McDade Foundation is a charity that has done a great deal in raising both awareness and the need for club’s to be prepared in the case of a sudden heart problem.
“Whilst the half going to the Albion Rovers Community Trust will help the club continue to develop for the future, and improve our overall relations with the Coatbridge community.
“We hope supporters of both clubs will give generously.”