A FOUR-GOAL hurricane by the name of James Forrest swept the champions to an emphatic, stylish and ruthless triumph against shell-shocked Saints at McDiarmid Park this afternoon.

The Celtic winger was simply unstoppable as he routed the Perth rearguard in a sensational one-man performance as Brendan Rodgers saw his team seal their first away Premiership victory of the campaign.

“Judge us in May,” said the Parkhead manager to the critics who have had a field day at the team’s expense which, admittedly, has shown little resemblance to the side of the past two campaigns.

However, the doubters were put firmly in their place as Forrest led the team through a varied array of attacking options that saw Tommy Wright’s men decimated as they were taken apart by a team bang in the mood to respond to the snipers.

Forrest took the first-half headlines with FOUR goals in a whirlwind display that had most onlookers actually feeling sorry for Saints keeper Zander Clark whose goal was under almost constant siege after the visitors awakened from their slumbers in the early moments when Craig Gordon had to make smart saves from a Danny Swanson first-timer and a header from Joe Shaughnessy.

Forrest put down a marker in the 10th minute with a vicious angled right-foot drive that was beaten away by Clark.

Two minutes later the shotstopper was at it again as he threw himself to his left to push a left-foot effort from Leigh Griffiths round the post.

But the end was in sight in the 15th minute when Celtic deservedly took the lead  Forrest took advantage of a slip by a home defender to pass inside to the impressive Tom Rogic who stroked a pass in front of Odsonne Edouard. 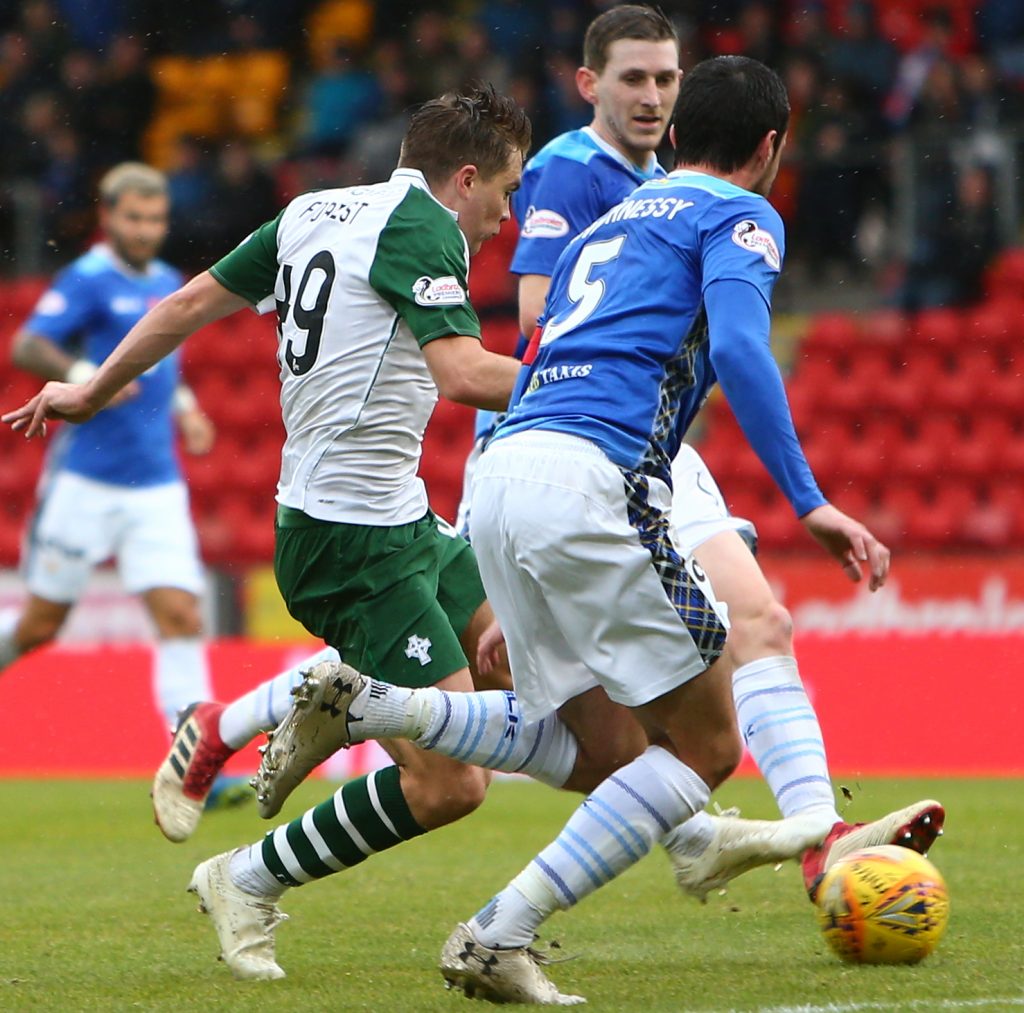 His shot was punched away, but Forrest pounced with pace and precision as he swept the rebound low into the net past the helpless keeper.

Clark saved well from drives from Edouard and Griffiths before the £9million Frenchman claimed the inevitable second goal with Wright’s side dizzy with attempting to cut off the exciting forward surges of the Hoops.

In the 21st minute, Kieran Tierney slipped a neat pass inside to Edouard who killed the ball with his right foot before drilling a low drive with his left wide of the groping fingers of Clark.

Nine minutes later, the goalie was picking the ball out of his net again as Forrest struck once more to put the finishing touches to a fine move that involved Tierney and Rogic before the raider was set up and there was no way he was going to pass up the opportunity as he thumped a right-foot attempt into the net.

In the 38th minute, Forrest finished with a flourish once again to claim his hat-trick. He worked a superb one-two with Rogic before sliding in one low past the unprotected Clark.

And just on the stroke of half-time it was the voracious Forrest who struck again to give the Hoops a five-goal interval advantage.

Once again Rogic was involved in the build-up before the Scotland international actually passed the ball into the far corner past the plunging Clark.

SIX APPEAL…Callum McGregor turns away after netting No.6. Pics: Geo.

Two minutes into the second-half, Swanson was red-carded for a vicious assault on Forrest with a lunge at the player while he had absolute no chance of reaching the ball.

It was the easiest sending-off decision Kevin Clancy will ever have to make.

Understandably, the Saints had no intention of exposing their defence and decided to shut up shop and attempt to keep the score down.

Not surprisingly, the Hoops lost a bit of edge although Clark was still asked to make smart saves from Rogic and Ntcham before the sixth goal was claimed by Callum McGregor after another bout of clever one-twos involving Mikael Lustig, captain for the day, and substitute Lewis Morgan.

The Swede rolled the ball inside to the midfielder and he didn’t hesitate as he first-timed another into the Saints net in the 84th minute.

This was Celtic’s biggest win in this fixture since 1937. Some things – like a return to the form more associated with the double-treble winners – are worth waiting for.